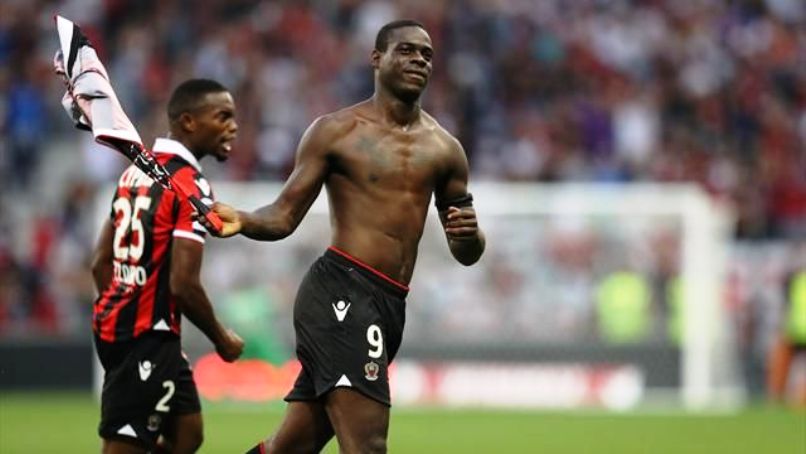 A superb Mario Balotelli strike four minutes from time gave Nice a 2-1 win over Lorient on Sunday that left them top of Ligue 1 going into the international break.

Ricardo Pereira put Nice in front on the Cote d’Azur but Benjamin Moukandjo equalised in the second half and it looked as if Lucien Favre’s side would have to settle for a draw until Balotelli bent in a brilliant late winner.

The Italy striker’s afternoon ended on a sour note however as he was sent off in stoppage time after picking up a pair of yellow cards in quick succession.

Brazilian defender Dante was quick to spring to Balotelli’s defence, adamant his team-mate had done nothing to warrant his dismissal following a brief altercation with Lorient full-back Steven Moreira.

“I don’t understand Mario’s sending off. I spoke to him about it. The opponent provoked him, he didn’t react. I don’t see any behaviour warranting a booking,” said Dante.

Beaten 5-2 in Russia by Krasnodar in the Europa League on Thursday, this result got Nice back on track and maintained their impressive unbeaten record domestically so far.

After eight games, they sit a point clear of local rivals Monaco, who beat Metz 7-0 away on Saturday to record their biggest ever away win in France’s top flight.

Defending champions Paris Saint-Germain are third, four points adrift of the leaders, following a 2-0 defeat of Bordeaux on Saturday in which Edinson Cavani scored twice to take his tally for the season to eight league goals.

At the Allianz Riviera, Nice went in front with just 11 minutes on the clock as Portuguese full-back Pereira cut in from the right and sent in a shot that surprised Benjamin Lecomte in the Lorient goal.

But the Brittany side had beaten Lyon in their last outing and they caused problems for a Nice side showing only two changes from the starting line-up that took to the field in Russia barely 72 hours previously.

Jimmy Cabot came close on a couple of occasions in the first half and Arnold Mvuemba had a free-kick deflected just wide two minutes into the second half.

The equaliser duly arrived shortly after the hour mark when Cameroon international Moukandjo finished nicely from a Mohamed Mara pass.

Malang Sarr then deflected a Mara shot onto his own bar as Nice found themselves hanging on, but a moment of magic from their Italian striker decided the game in the home side’s favour.

Wylan Cyprien flicked the ball into the path of Balotelli inside the area, and he took a touch before curling a powerful shot into the top-right corner of the net for his sixth goal in a Nice shirt in just five appearances.

Lyon moved up to fifth with a 2-0 win over bitter rivals Saint-Etienne with Spanish star Sergi Darder opening the scoring in the 41st minute and Algerian winger Rachid Ghezzal making sure of the points two minutes from time.