Home 2022 Blend of youth and experience to sample Team Peugeot TotalEnergies’ 9X8 at... 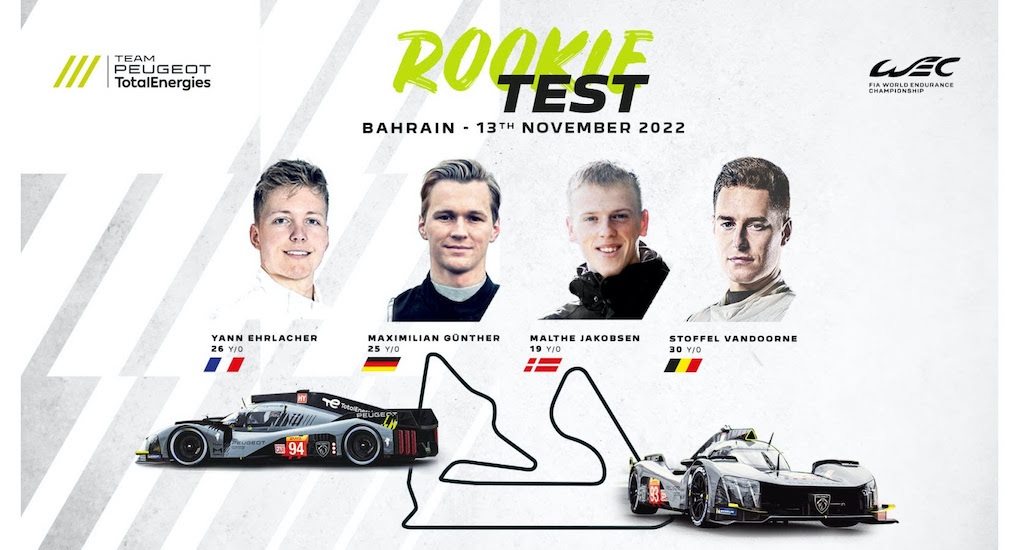 Team Peugeot TotalEnergies has invited four drivers to try its PEUGEOT 9X8 during the FIA World Endurance Championship Rookie Test at Bahrain International Circuit in Sakhir on November 13, the day after the series’ 8 Hours of Bahrain season finale.

The line-up is composed of a blend of youth and experience, with Germany’s Maximilian Günther (25 years old), Dane Malthe Jakobsen (19), Frenchman Yann Ehrlacher (26) and Stoffel Vandoorne from Belgium (30) all set to get behind the wheel of the brand’s pioneering hybrid Hypercar.

The day after the 8 Hours of Bahrain (which gets underway at 2pm local time on Saturday, November 12), the crews of the #93 and #94 Peugeot 9X8s will look somewhat different to normal.

Instead of the team’s usual incumbents, four new faces will take to the wheel of the two LMH hybrid cars for the annual FIA WEC Rookie Test.

Team Peugeot TotalEnergies is looking forward to giving these four ‘rookies’ an opportunity to try its car. With five hours of track time available, their dialogue with the team’s engineers and usual drivers promises to be particularly interesting.

The session will also be a chance for drivers who compete in cars of other Groupe Stellantis brands to sample endurance racing’s Hypercar class.

The programme for the test will be as follows:

In the #93 car, regular driver Mikkel Jensen will be joined by Stoffel Vandoorne, the recently-crowned ABB FIA Formula E World Champion who has already made two appearances at Le Mans and who brings with him experience of racing in Formula 1. Long runs are on the agenda for the pair.

Like Team Peugeot TotalEnergies, these four sportsmen – who between them embody a mixture of youth, experience and success – intend to take full advantage of the opportunities offered by the test.

“From what I have seen so far, I love the aggressive style of the 9X8. Like many, I imagine, I am particularly intrigued by the absence of a rear wing. I climbed into the cockpit for my seat-fitting and I was very impressed, I have to say. Everything about the car has been designed for optimum performance – right down to the tiniest details. I can’t wait to get out on-track in Bahrain. It’s going to be a fantastic new experience and I hope to extract the very most out of it and give some good feedback to the team’s engineers. For a French driver, it’s hugely exciting to be given a chance like this in such an incredible French car. Nobody can predict what the future holds, of course, so I’m just taking everything one step at a time – and we’ll see where that leads me.”

“This will be my first time in a prototype, and not only that but a Hypercar – the pinnacle of endurance racing and the Le Mans 24 Hours, a discipline and race that are both legendary in this sport. It goes without saying that I’m looking forward to the test enormously, and I’m very grateful to Team Peugeot TotalEnergies for giving me this opportunity. The 9X8 has a striking appearance and the fact that the LMH regulations permit such freedom of design is fantastic. I’m well aware of Peugeot’s success and achievements in endurance racing – particularly the win at Le Mans in 2009. I was competing in karting at the time, and I remember very clearly the brand’s unfettered passion for racing. I really can’t wait to drive the 9X8 for the first time and to be contributing to a productive test in Bahrain.”

“I’m so happy! It’s only a couple of weeks since I won the European Le Mans Series LMP3 class title with COOL Racing/CLX Motorsport, and now I have been selected to take part in the FIA WEC Rookie Test with Team Peugeot TotalEnergies! I have just completed my third season in endurance racing, which is hugely popular in Denmark because of Tom Kristensen. Personally, I really enjoy the teamwork aspect of the discipline, and the close collaboration required between drivers in order to establish the best set-up for the car. I’ve seen photos of the 9X8 on social media, and it looks incredible with its lack of rear wing. So original. I really can’t wait for the test! Compared to what I’m used to in LMP3, driving a Hypercar will be a huge step, so I’ll go into the day with a humble approach and the primary objective of doing a good job.”

“I’ve already had the opportunity to compete in endurance racing and tackle Le Mans in both the LMP1 and LMP2 categories. The Hypercar class has attracted a number of major manufacturers, which will make for a very exciting championship – and Peugeot has always built iconic cars in endurance racing. I remember the 908, when I was just starting out in single-seaters, and now the 9X8’s unique concept has everybody talking about Peugeot again. I got to grips with the car a bit during a simulator session, which allowed me to start familiarising myself with its various systems. Even if there are some similarities with Formula E, the driving experience will clearly be very different! It’s going to be a fun day.”