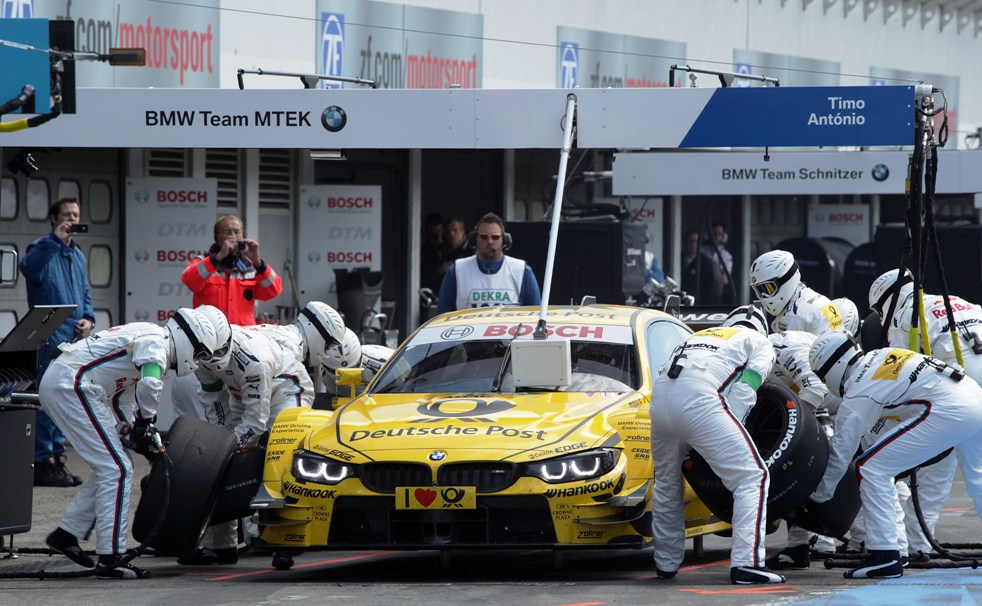 Following the BMW M4 DTM’s historic victory in the very first race of its career at the season-opener in Hockenheim (DE), the BMW teams now head to the Magdeburger Börde (DE) region of Germany full of confidence. After the 60th win for BMW in the DTM and an impressive overall result, with six BMW M4 DTMs in the top ten, it is now the turn of the “Motorsport Arena Oschersleben” (DE) to host the second DTM race of the year on 18th May.

The 3.696-kilometre circuit has been a happy stomping ground for BMW DTM drivers in the past. The top step of the podium has been occupied by a BMW driver after both of the races since the manufacturer made its comeback two years ago. Bruno Spengler (CA) led from start to finish in 2012 en route to winning the title, while Augusto Farfus (BR) was first across the finish line at the end of last year’s 51-lap race.

The winding circuit is a mixture of slow corners, in which traction is vitally important, and flowing sections. The drivers must be particularly focussed at the start, as the first 90-degree left-hander is traditionally a crowded affair. Another key point on the circuit is the chicane before the home straight. The cars must take a particularly aggressive line over the kerbs here, without losing valuable time. Joey Hand (US) of BMW Team RBM clocked the fastest lap of last year’s DTM race in Oschersleben. The American set a time of 1:21.255 minutes on lap 14.

After making a dream start to the DTM’s anniversary season – the touring car series is 30 years old this year – BMW leads the Manufacturers’ Championship with 54 points. BMW Team RMG, which claimed its first DTM victory in Hockenheim, tops the Team standings with 25 points. A maiden victory at the opening race of the season sees Marco Wittmann (DE) take an early lead at the top of the Drivers’ Championship with 25 points.

The new Performance Weights will be given their first outing in the DTM at the race in Oschersleben. As well as Wittmann, Timo Glock (DE), Spengler, Martin Tomczyk (DE), Farfus and Hand must all carry an extra five kilograms of ballast. António Félix da Costa (PT) and Maxime Martin (BE) both start with an additional 2.5 kilograms on board. 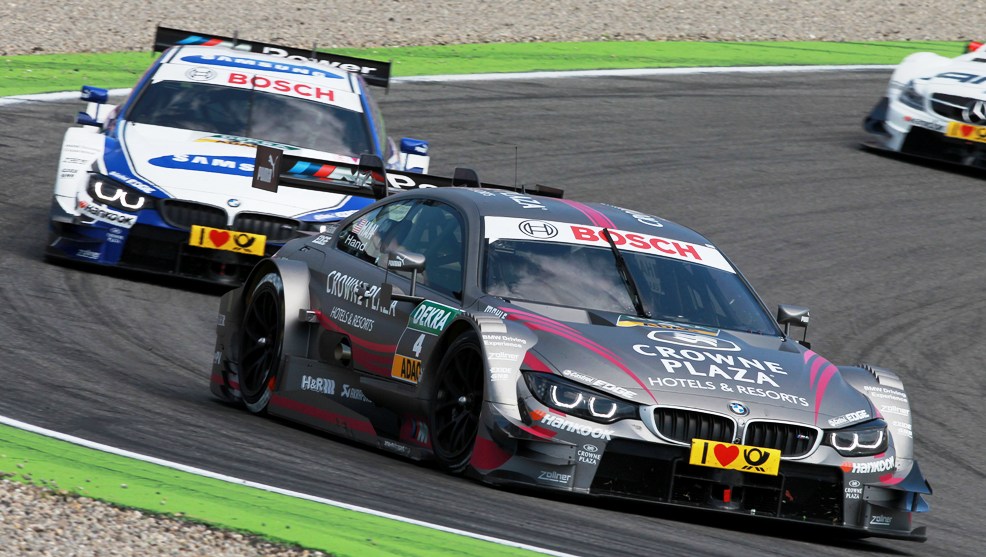 Jens Marquardt (BMW Motorsport Director): “We made a dream start to the new season with the BMW M4 DTM’s maiden win at the opening race in Hockenheim. However, that is absolutely no reason to rest on our laurels. On the contrary: the past two seasons have shown on more than one occasion that everyone basically starts from scratch at each race weekend. That will also be the case in 2014. Despite this, we are obviously very happy with the successful debut of the BMW M4 DTM. We were in a position to win with the new car right from the outset – and that shows what a good job our development team did. The Motorsport Arena Oschersleben proved to be a happy stomping ground for us in 2012 and 2013. It would be fantastic to extend our winning run there with the new BMW M4 DTM. However, the DTM does not do requests. Our cars will race with Performance Weight on board for the first time, which will definitely have an effect and not make the task any easier for us. Despite this, I am confident we will put on another good show for the BMW fans in Oschersleben this year. Whatever happens, we are definitely highly motivated after the strong outing in Hockenheim.”

Bart Mampaey (Team Principal, BMW Team RBM): “Scoring points with both cars at the opening race of the season was a nice result for our team. The goal for Oschersleben must obviously be to do better in qualifying, which will then allow us to compete higher up the field right from the start of the race. Overtaking is traditionally difficult at the Motorsport Arena. We have very fond memories of last year’s race. Augusto Farfus won to keep the DTM title race open.”

Charly Lamm (Team Principal, BMW Team Schnitzer): “The DTM season really gains momentum with round two in Oschersleben. Generally speaking we can be happy with the start we made in Hockenheim, although we were certainly hoping for a little bit more after such a promising result in qualifying. However, we at least managed to pick up seven valuable points for the team, with Bruno Spengler sixth and Martin Tomczyk seventh. The race in Hockenheim also showed that the BMW M4 DTM is capable of winning. That fills us with optimism for the challenges ahead. We have always done well in Oschersleben in the past: Bruno won the race in 2012.”

Ernest Knoors (Team Principal, BMW Team MTEK): “We made a very promising start to the new season. The performance of our two drivers was very good throughout the entire race weekend in Hockenheim. Timo Glock was very quick and scored a good amount of points. Up until the mistake late on in the race, António Félix da Costa had also impressed on his DTM debut. If we can perform that strongly in qualifying and the race at the next round in Oschersleben I will be very happy.”

Stefan Reinhold (Team Principal, BMW Team RMG): “It was a huge load off my mind when our team picked up its maiden win in the DTM in Hockenheim. My team worked very passionately for that, and more than deserves its success. It would obviously be nice to follow on from the performance at the season-opener when we race in Oschersleben. However, we are keeping both feet firmly on the ground. We know we will have to be just as focussed at the Motorsport Arena as we were at the Hockenheimring. If we do that, I am confident we can achieve another good result.”

Augusto Farfus (car number 3, BMW Team RBM): “The new season is up and running. Our result in Hockenheim showed we are among the front-runners from the word go with the new BMW M4 DTM. That is very encouraging. However, we hardly have time to catch our breath before the next race in Oschersleben. I really like the track and achieved a lot of good results there in the World Touring Car Championship. Last season BMW Team RBM did a very good job in Oschersleben, which allowed me to cross the finish line first. I am highly motivated to score another top result there.”

Joey Hand (car number 4, BMW Team RBM): “Oschersleben is a bit like a go-kart circuit for racing cars. At first glance the track looks quite easy, but it certainly is not. The circuit is very bumpy. Slow sections alternate with quick corners – and then you have a quick chicane too. It is quite a cool track. Although I am yet to get a very good result there, I do really like it. The priority for me will be to qualify better than I did in Hockenheim. The morale in BMW Team RBM is very good after the points we scored in Hockenheim – as is my own. Bring on Oschersleben.”

Bruno Spengler (car number 9, BMW Team Schnitzer): “I am really looking forward to Oschersleben. The circuit is very interesting and technically demanding. I like the atmosphere in the Motorsport Arena, and the fans’ support is simply sensational. The whole region is mad about motorsport, and you can sense that as a driver. I will push hard to leave Oschersleben with as many points as possible.” 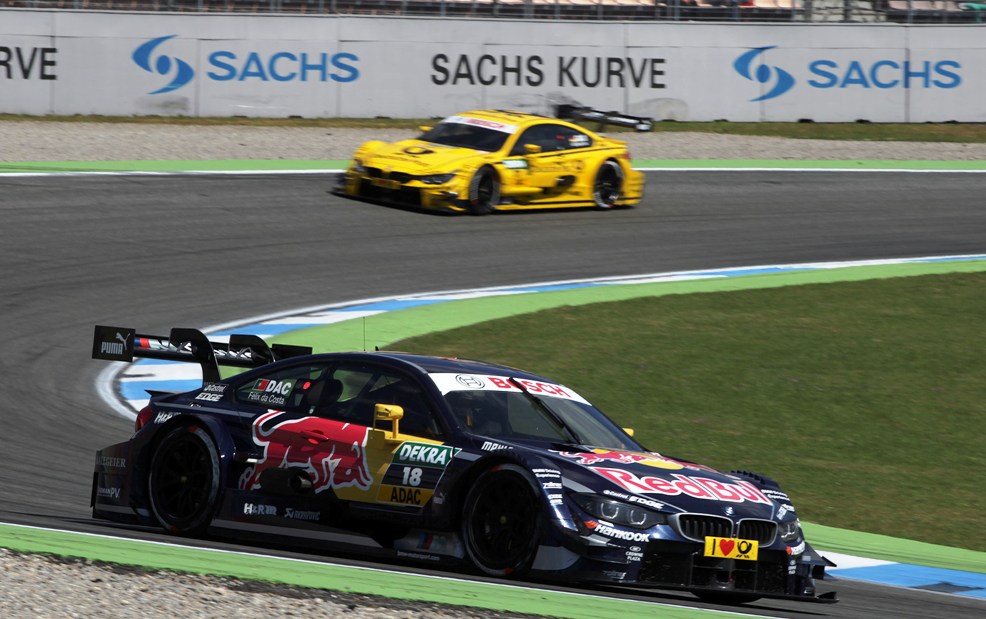 Martin Tomczyk (car number 10, BMW Team Schnitzer): “We have always done well in the Motorsport Arena in recent years. It is a really narrow circuit with a lot of long corners. It will be a challenge for us drivers. However, the season-opener in Hockenheim showed that the performance of the BMW M4 DTM is good. Let’s see what the balance of power is like in Oschersleben. Personally, I am looking to build on my Hockenheim result. The potential was definitely there to do better in qualifying, and in the race.”

Timo Glock (car number 17, BMW Team MTEK): “I am intrigued to see whether we can achieve a good overall result for BMW like the one we enjoyed at the opening race in Hockenheim. Hopefully I will have more luck at the Motorsport Arena this time than I did last season. My goal remains the same: I want to consistently finish in the points in 2014. I achieved that with my fifth place in Hockenheim. I will now be going all out to pick up a good amount of points again in Oschersleben.”

António Félix da Costa (car number 18, BMW Team MTEK): “All in all, I had a positive DTM debut in Hockenheim. The pace was there, both in qualifying and the race. Unfortunately I made a mistake, which meant the good performance was not reflected in the end result. However, my team and I have laid a very sound foundation, on which we can build for the next race in Oschersleben. I know the circuit. It is very interesting.”

Marco Wittmann (car number 23, BMW Team RMG): “The Motorsport Arena is a circuit with a lot of corners. For this reason, we need the car to generate a lot of downforce to set fast times. However, I travel to the second round in Oschersleben with confidence and a lot of momentum on the back of my maiden DTM win at the season-opener in Hockenheim. It is important to find the perfect set-up for qualifying and the race. The set-up is particularly important this time, as we must now carry performance weights after the successful result in Hockenheim. With this in mind, it is difficult to make any predictions for the race.”

Maxime Martin (car number 24, BMW Team RMG): “I know the circuit in Oschersleben very well, and have won there in the past in the ADAC GT Masters. However, racing in the Motorsport Arena in a DTM car will obviously be a completely different experience. I am really looking forward to the challenge. The circuit is very different to the Hockenheimring, so the experience I gained in Hockenheim cannot be adopted one-to-one. Despite this, I can still take a lot of positives from my DTM debut, and am really hungry to get back out on the track.”

Statistics ahead of the race in Oschersleben: