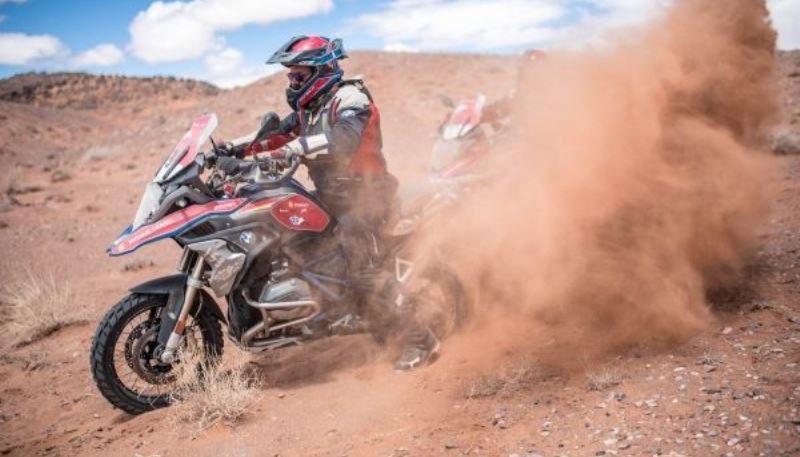 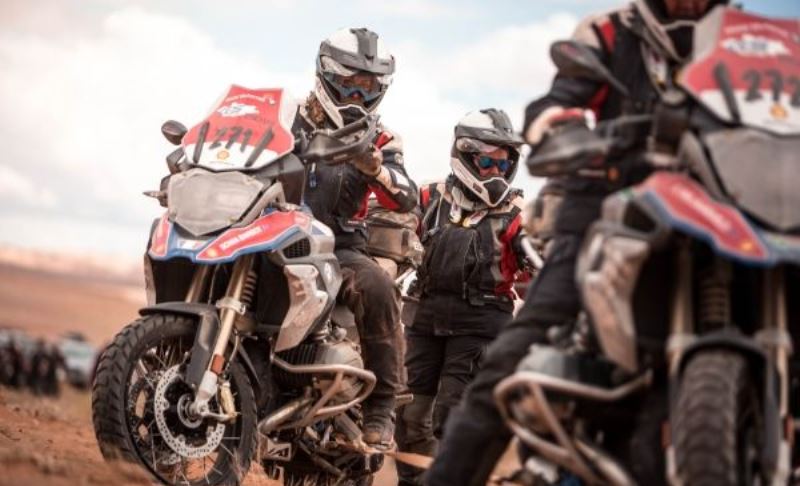 This morning brought the calm after the storm, for last night at Camp Gobi Erdene the 2018 BMW Motorrad International GS Trophy was battered by high winds. This tested the tent erecting expertise of the GS riders and a few found they needed urgent help to save their camping equipment!

The wind blew hard all night, but fortunately – and no doubt through great design from Marmot – all the tents survived.

All of which was tough preparation for a long day ahead, as today the GS Trophy was back to its best with a 283km course to negotiate, all off road and much of it in sand – this being part of the Gobi Desert region. So again the scenery thrilled the riders as they were treated to truly vast landscapes as they passed through a canyon, crossed sand hills, then took off across seemingly never ending plains.

The riding remained testing as regularly sand overcame the gravel, frequently to such a depth so the GS riders had to work hard to maintain momentum and balance in the sand washes. Just as well the temperature was cooler today. At the halfway point they encountered their first special test of the day, ‘Lava Canyon’ – a bike towing exercise that’s something of a tradition in the International GS Trophy.

Only this time they needed to tow in deep sand, up and down a hilly trail. After this came more plains to cross, so vast the riders could ride line abreast (nine bikes) if they pleased, so no one had to ride in the dust clouds. The last kilometres were reminiscent of a mogul run in skiing as the trail weaved enticingly through rocky outcrops before descending onto the impressive Camp Ongiin Nuuts for the finish.

But before the riders could rest – the second special test of the day – came the ‘Marmot Challenge’. Here the teams needed to erect one of their Marmot Vapour two-person tents, two people had to climb in, then climb out again and speedily pack it away – against the clock of course. Given the extreme camping of the night before, this was a simple task.

But as always with the GS Trophy, some are better than others… So we can’t forget the competition itself, and now with three days of special test results accumulated its reigning champions South Africa who have again taken a commanding lead, as ever they’re a well-practiced squad. Korea had led after two days but still remain within striking distance of the leaders. Latin America make up the top three as the competition reaches its halfway point.

Quotes: Olivier Fayat, Team France: “It was great today. We rode a lot of sand and we enjoyed the company – we had Team Japan to ride with and Jean-Luc, a French marshal, to guide us. We make point of riding together with the other teams, one French following one Japanese and so on, so that we ride as one team and we get to know each other, we enjoy meeting with the other riders and sharing the days. We have already enjoyed so much of the GS Trophy, Jerome says he has enjoyed today the most, because it reminds him of home (near Lyon), with the mountains and plains, but Paul and myself really enjoyed yesterday as we met a Mongolian family along the way and were invited into their yurt, it was fascinating to be shown their way of life. Jerome has also brought along a supply of foam tennis balls and we give these to the children we meet, often we play a few games with them, it’s a great way to break down the communication barriers as the Mongolians mostly speak only their own language.”

Suprej Venkat, Team India: “This is India’s first time in the GS Trophy and we are finding it very very difficult – we may have underestimated it. We had no clue what it would be like, we went by the videos, maybe we watched 16 of them or so, and we identified the river crossing tests and such. But when we came here we’ve found it’s nothing like what we expected, and we’ve never ridden sand! And clearly we haven’t practiced enough, maybe one day a week, we needed to do more. So I’ve already started messaging my GS friends back at home who’d like to come to the next Trophy – I said, guy’s you need to be practicing on river beds, on mountains, not on flat land. That’s a lot of lessons we’ve learned. So we are struggling and I think if we complete the week that will be a great achievement. What we really appreciate is the marshals and the other riders have been there for us, helping, giving us tips, it’s just been brilliant.”

The BMW Group With its four brands BMW, MINI, Rolls-Royce and BMW Motorrad, the BMW Group is the world’s leading premium manufacturer of automobiles and motorcycles and also provides premium financial and mobility services. The BMW Group production network comprises 30 production and assembly facilities in 14 countries; the company has a global sales network in more than 140 countries.

The company has therefore established ecological and social sustainability throughout the value chain, comprehensive product responsibility and a clear commitment to conserving resources as an integral part of its strategy. www.bmwgroup.com Facebook: http://www.facebook.com/BMWGroup Twitter: http://twitter.com/BMWGroup YouTube: http://www.youtube.com/BMWGroupviewGoogle+: http://googleplus.bmwgroup.com