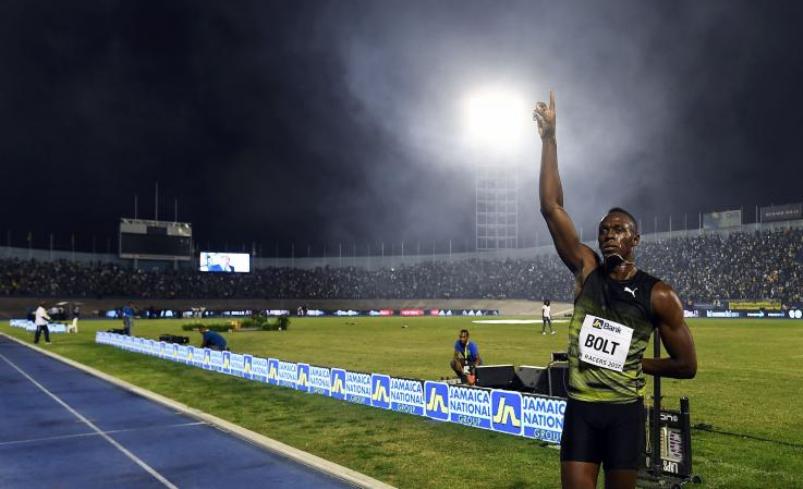 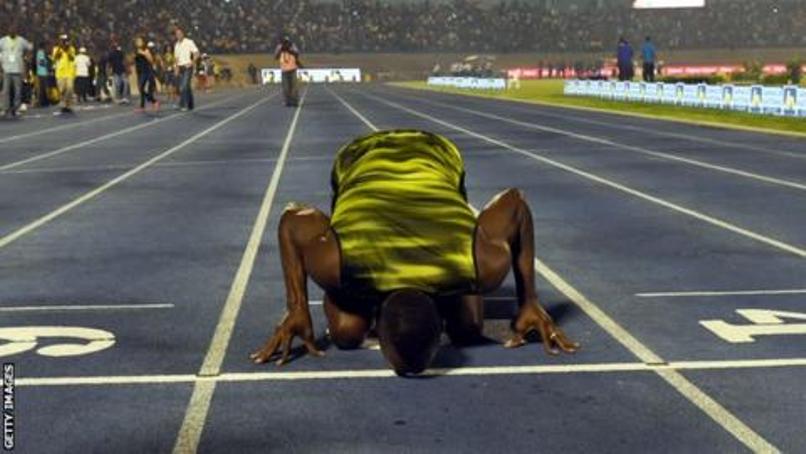 Usain Bolt partied with his devoted fans in an emotional farewell at the National Stadium on Saturday as the world’s fastest man ran his final race on Jamaican soil.

Bolt wanted to go out in a blaze of glory as he won the 100 metre “Salute to a Legend” race in front of a raucous crowd of 30,000 on the same track where he launched his international career at the world juniors in 2002.

The 30-year-old Bolt leaped out of the blocks and cruised to victory in a time of 10.03, well below his world record time but good enough to beat a solid field.

“I don’t think I have ever been that nervous to run the 100 metres,” said Bolt, who is retiring in August following the World Championships.

“Just the atmosphere and the people. The support they came out and gave me, it was really nerve-wracking.”

After the race the Bolt took a victory lap then returned to the track and the No. 5 lane where he kissed the finish line before flashing his signature lightning-bolt pose for the final time at home.

“There is no words,” Bolt said. “From world juniors to now I have always been getting great support from Jamaica.

“I never thought I would ever reach this height in track and field. My only aim was to be a 200 metre Olympic champion.

“I have done all I have done. Being a legend now is something big. But I couldn’t have done it without the support of my parents.”

The nine-time Olympic gold medallist Bolt did not run in the fastest 100 metre race of the evening, but his devoted fans didn’t care.

He ran in front of a sea of green and yellow clad Jamaican fans who showed their pride by dancing, waving flags and blowing vuvuzela horns while fireworks lit the sky.

Bolt said the reception he received was larger and louder than he anticipated.

“I never expected this. I knew it was going to be big but the stadium was jam-packed with people supporting me I appreciate that,” he said.

“To see everybody turn out shows that what I have done for the sport is a big deal to them.”

Since this was his first race of 2017, Bolt said his biggest concern was just putting on a good show.

The Jamaican speedster says his farewell season is more about saying thank you to his fans than trying to break his world records of 9.58 seconds in the 100 metres and 19.19 seconds in the 200 metres.

Bolt was honoured during a 20 minute ceremony on the infield which was attended by his coach Glen Mills and Sebastian Coe, president of the International Association of Athletics Federations.

Coe thanked Bolt saying, “Our words are modest but our thanks our mountainous.

“His contribution has been mammoth. A figure to all of us in his sport and I wish him the best of luck.

“There is nowhere else I would rather be as president of IAAF than in this stadium with you tonight.”

He said he plans to run the 100m at the London World Championships but he still has a lot of work to do to get ready.

“My execution was bad and my start was poor,” he said of Saturday’s race. “It is my first race and I didn’t expect anything spectacular.

“I just wanted to come out here and put on a show for the crowd and thank them for the support.”

In other events, Jamaica’s Yohan Blake won the first 100 metre race of the evening as he clocked a 9.97 to hold off South Africa’s Akani Simbine, who finished in 10 seconds flat. Bolt’s time would have placed him third in Blake’s heat.

British track star Mo Farah easily won the 3,000 metres running away from the pack to cross the finish line in a time of 7:41.20 while David Tarbei squeezed by fellow Kenyan and world record holder David Rudisha at the line to win the men’s 800 metres in a time of 1:44.85. – Agence France-Presse