Home Badminton A bridge too far for Peng Soon-Liu Ying 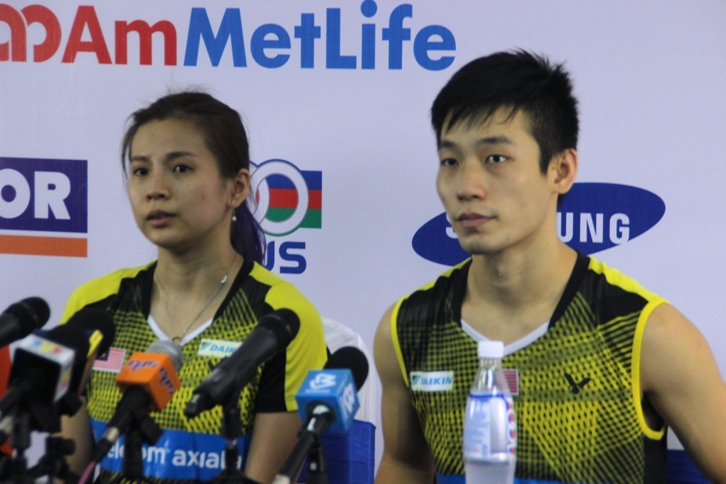 The packed stadium and drum beating Malaysian supporters were not enough to give Chan Peng Soon-Goh Liu Ying the extra to end Malaysia’s 53-year wait for the mixed doubles title in the Malaysia Open at the Malawati Stadium in Shah Alam on Sunday.

The unseeded Malaysian pair lost a nail-biting final to Indonesia’s Tontowi Ahmad-Liliyana Natsir 21-23, 21-13, 16-21 in a marathon 81 minutes match. It was the Indonesian pair’s first SuperSeries since winning the French Open in 2014.

“It was certainly not our best performance. Still we gave our best but it was not good enough to win the title on home soil and in front of the Malaysian fans,” said Peng Soon who was quick to admit that his serves need to be improved.

For Liu Ying it was a day of mixed emotions.

“It was happiness to have reached the final but sadness when you fail to win the title despite the strong support from the home fans.

“Our opponents were more consistent than us and this made the difference. If there is a plus point for us, we are more matured now. My partnership with Peng Soon is beginning to bear fruit.

“We can only get better and we hope to be in better shape for the Olympics,” said Liu Ying, who also admitted that there is still some fear when she thinks of the knee injury that needed constructive surgery.

“We are on the right track and with the help of coach Chin Eei Hui we will improve our shortcomings.”

Eei Hui admitted that she needs to work more on Peng Soon’s serves.

Despite the failure to win the title, it was still a creditable performance by Peng Soon-Liu Ying for reaching the Malaysia Open Premier after winning the New Zealand Open Grand Prix Gold in Auckland.

Tontowi said they were “very focused on the match” and shut their ears to the vociferous home supporters. This the second time Peng Soon-Liu Ying finished runners-up in the Malaysia Open.

They also played bridesmaid in 2013 when they lost to Joachim Fischer Nielsen-Christinna Pedersen in the final.

The last Malaysian pair to win the Mixed Doubles at the Malaysia Open were Tan Aik Huang-Teoh Siew Yong way back in 1963.