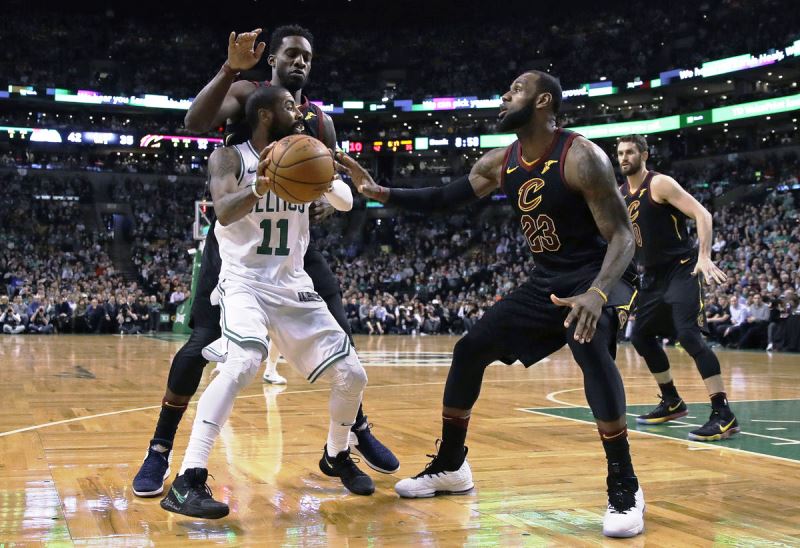 Jayson Tatum and reserve Marcus Smart each scored 15 points, Jaylen Brown added 14 points and Kyrie Irving and Al Horford each contributed 11 and nine rebounds as the East-leading Celtics improved to 31-10.

“That shows what type of team we are,” Rozier said of the Celtics’ scoring depth. “From day one we’ve always had that next man up mentality and we’ve kept it going.

“We just want to build from this and keep going.”

LeBron James led the Cavaliers with 19 points and added seven rebounds and six assists but Cleveland fell to 25-13, third in the East, behind Boston and Toronto.

Cavaliers big man Kevin Love injured his right ankle late in the second quarter and managed only two points on 1-of-11 shooting.

Cleveland’s Isaiah Thomas sat out a night after making his season debut for the Cavs, missing more than two months with a hip injury after being traded from the Celtics in a deal that sent Irving to Boston.

Thomas exchanged hugs and smiles with his former teammates before and after the game and when he was shown on the scoreboard videoscreen, Boston fans responded with a standing ovation. Ex-Celtics forward Jae Crowder received one as well.

“It’s alwas great going against your former teammates,” Rozier said. “Those guys are great. I played two good years with them. Always great catching up.”

DeMar DeRozan scored 35 points to power the Toronto Raptors (26-10) to a 124-115 victory at Chicago while Greek standout Giannis Antetokounmpo had 31 points and 10 rebounds in Milwaukee’s 122-101 home romp over Indiana.

Stephen Curry scored 32 points, including the game-winning 3-pointer with 3.4 seconds remaining, and reigning champion Golden State improved to an NBA-best 30-8 with a 125-122 triumph at Dallas.

Kevin Durant and Klay Thompson each added 25 points for the Warriors. Durant had 11 rebounds while Draymond Green contributed 18 points and 10 rebounds.

The Houston Rockets, playing without guard James Harden due to a hamstring injury, had 27 points off the bench from Gerald Green and 21 more from Clint Capela in a 116-98 romp at Orlando.

Eric Gordon and Ryan Anderson each scored 17 points for the Rockets (27-9), who had 13 assists from Chris Paul and never trailed. Aaron Gordon led the Magic with 16 points.

Canadian Kelly Olynyk had 25 points and 13 rebounds while Slovenian Goran Dragic added 24 points and 13 assists to lead Miami over visiting Detroit 111-104. Tobias Harris had 19 to lead six double-figure scorers for the Pistons.

Spencer Dinwiddie, who scored 26 points and passed off nine assists, sank the winning jumper with nine seconds remaining to give Brooklyn a 98-97 victory over Minnesota. Jimmy Butler led the visiting Timberwolves with 30 points but missed a decisive jumper at the final buzzer.

Anthony Davis scored 29 points and grabbed 15 rebounds to spark New Orleans to a 108-98 victory at Utah while Gary Harris scored 36 points off 14-of-17 shooting to power Denver over visiting Phoenix 134-111. – Agence France-Presse