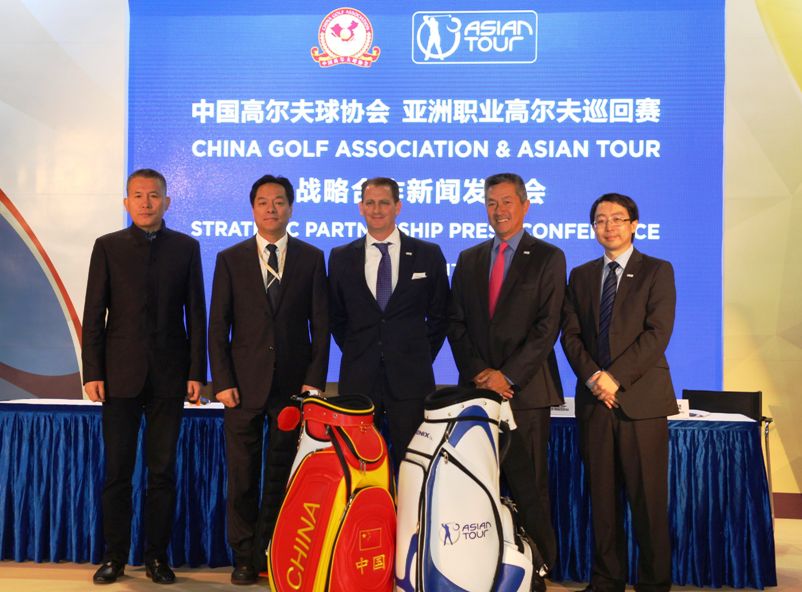 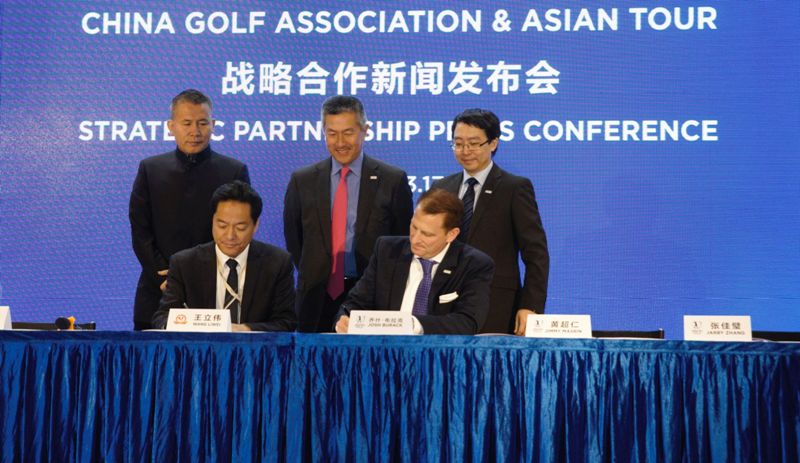 The China Golf Association (CGA) and Asian Tour have announced their strategic partnership which aims to further grow the game through the creation of new tournaments in China that will be co-sanctioned by both organisations.

Winners of these new co-sanctioned tournaments in China will also earn their exemption on the Asian Tour under the winner’s category.

The prize purses of the new events will range from US$300,000 to US$500,000 and more CGA and Asian Tour co-sanctioned tournaments will be staged from 2018 and beyond.

Mr. Wang Liwei, Vice President of China Golf Association said: “On behalf of the CGA, we are delighted to announce our new and exciting partnership with the Asian Tour. The last time the CGA worked with the Asian Tour was back in 2008. We welcome the Asian Tour back to China and look forward to co-sanctioning a number of tournaments so as to develop the game of golf in China and also in Asia.

“As the governing body for golf in China, the CGA continues to place utmost importance towards the development of golf in our country. We are optimistic our partnership with the Asian Tour will generate greater interest in the game amongst sports fans and sponsors in China and also provide Chinese professional golfers with many career pathways onto the international stage.”

Asian Tour CEO Josh Burack expressed his delight with the milestone partnership with the CGA and believes it will further develop golf in China and across the region.

“We are honoured to forge a strategic partnership with the CGA which is truly a significant development for professional golf in Asia. The CGA has been fantastic in sharing their vision to grow the game in China which is aligned to our own mission to do the same in China and across Asia as a whole.

“Re-starting cooperation is a game changer for the Asian Tour and CGA as the creation of new tournaments will greatly enhance playing opportunities for our players and for the many talented players coming up from China.

“Winners of these new tournaments in China will receive their playing cards on the Asian Tour, which also open up their pathways through the many tournaments we co-sanction with other Tours. The Asian Tour is very enthusiastic to work with the CGA again as this partnership is going to benefit the players tremendously.

“Through our partnership with the CGA, we are confident Chinese golfers will have every opportunity to compete and excel at the highest level through our tournaments featuring greater Official World Golf Ranking (OWGR) points in China and across the region.

“At the same time, these new tournaments will provide more playing opportunities for our existing Asian Tour members who will be delighted to return to China. This is a terrific new chapter for Asian golf and we are excited to see many more Chinese golfers’ success,” said Burack.

As a member of the International Federation of PGA Tours, the Asian Tour has been a sanctioning partner of the WGC-HSBC Champions, which takes place annually in Shanghai and is the only World Golf Championships event staged in Asia.  Until now, this was the only Asian Tour sanctioned event in China.

The Asian Tour previously co-sanctioned and staged tournaments in China with the CGA from 1995 until 2008. During that period, a pioneer group of Chinese professional golfers emerged onto the scene, with Zhang Lian-wei enjoying the most success with five victories on the Asian Tour.

“I started my career on the Asian Tour and it has given me lots of opportunities to grow and improve as a player. I would like to give special thanks to Mr. Wang Liwei and the China Golf Association for their support towards the Asian Tour. I’m confident this partnership will grow from strength to strength which will ultimately go a long way towards promoting the development of golf in China.”

With this strategic partnership between the CGA and Asian Tour, the current generation of Chinese golfers only need to look at Zhang’s past success on the Asian Tour for inspiration as the opportunity to compete in Asian Tour events in China and across the region will provide them with a career launch pad that the Chinese trailblazer has enjoyed.