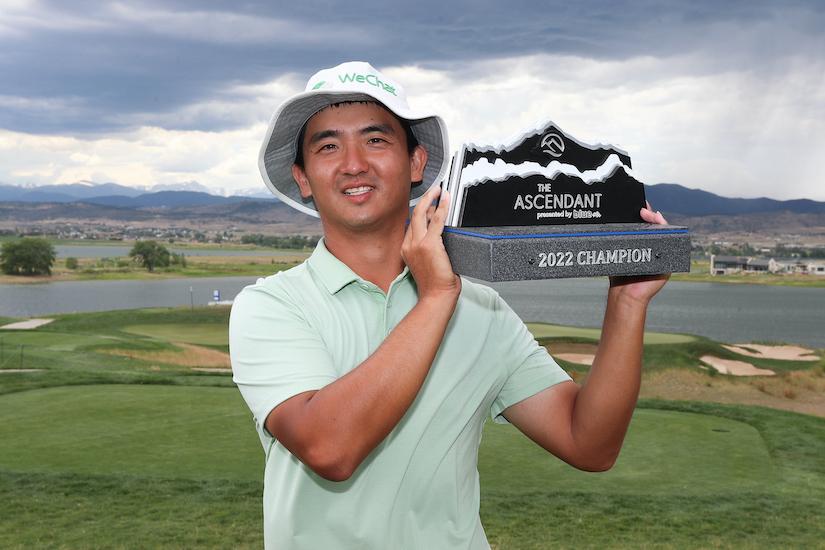 Marty Zecheng Dou is heading back to the PGA TOUR after notching a well-earned victory at The Ascendant presented by Blue on Sunday as Carl Yuan ensured a first-ever one-two finish by mainland Chinese golfers on the Korn Ferry Tour.

Dou’s career third title on the Korn Ferry Tour, courtesy of a final round of 5-under 67 at TPC Colorado, saw him become the fourth Asian golfer this season after Yuan and Korean duo, Seonghyeon Kim and Byeong Hun An, to secure PGA TOUR cards for next season.

Yuan consolidated his No. 1 ranking on the Korn Ferry Tour following his seventh top-10 of the season which includes a win after he launched a back-nine charge which saw him finish one stroke back of Dou after he signed off with a 67 as well.

The 25-year-old Dou was delighted to be PGA TOUR-bound, four years after he spent one season competing against the best in the world. “I’m definitely more prepared than that year (2018) because I’ve never felt as consistent as I am right now,” said Dou. “I think I can compete with them now.”

Tied for the overnight lead with Ryan McCormick and Dawson Armstrong, who both closed with disappointing 73s, Dou was near flawless and made birdies on Hole Nos. 5, 9, 10, 13, 15 and 16 to take a two-shot lead into the final hole, which he bogeyed for a winning 17-under 271 total.

Dou’s return to the winner’s circle – he won the 2017 Digital Ally Open and 2019 The Bahamas Great Exuma Classic – was timely as he had missed successive cuts in his last three starts as the nerves of battling it out for a PGA TOUR card started to get the better of him.

“The year started off really well and I never doubted myself until like a month and a half ago, my swing was like falling apart. But last week was a really, really important week and I had a good rest and went for some lessons and here you go,” beamed Dou, who made just four cuts in his 23 starts on the PGA TOUR during the 2017-18 season.

“I missed two cuts, and the third event, I was 6-under and I was still thinking about the cut line, which was 4-under, and I made three straight bogeys, and missed by one. I got really worried because on this Tour, it’s so tough and cut lines get into your mind so much.”

After tapping home his final putt of the day, Yuan, his wife Cathy and Dou’s girlfriend, Muyu Wu, ran onto the 18th green and doused Dou with water to celebrate their compatriot’s victory.

Dou acknowledged their support has been pivotal and he was now looking forward to battling with Yuan for the No. 1 ranking on the Korn Ferry Tour, which also grants exemptions into THE PLAYERS Championship and U.S. Open next season.

“It’s great. All my buddies out here, like they keep me motivated. I try to do the same and keep them motivated and play good together and be somewhere at the top of the PGA TOUR sometimes,” said Dou, who jumped from 19th to second place in the latest points list.

“I need probably another win in the playoff event, and hopefully, like Carl said, we’re going after the Player of the Year and see who gets it.”