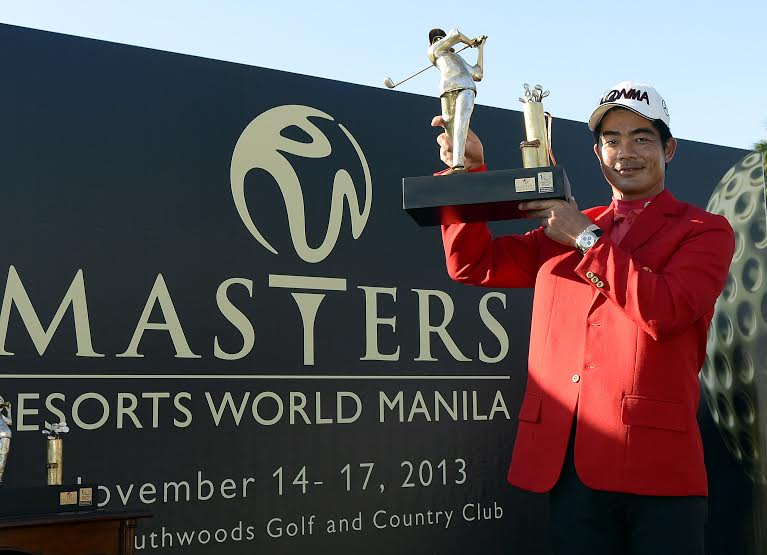 China’s number one Liang Wen-chong has confirmed his title defense at the US$1 million Resorts World Manila Masters presented by 918.com next month.

The former AsianTour number one triumphed at the inaugural tournament last year and subsequently earned the tag as the ‘people’s champion’ when he generously donated half his prize winnings to victims of Typhoon Yolanda, which devastated the country just weeks earlier.

“I will try my best to defend the title. I still remember that we played the tournament a week after the typhoon and I hope the people of the Philippines have recovered from that episode,” said Liang.

Leading by one stroke going into the third day, Liang produced a superb back nine performance at the Manila Southwoods Golf and Country Club to force his way into a play-off with Thailand’s Prom Meesawat, who had charged into contention with a closing 65.

The 36-year-old Chinese birdied the 11th, 13th, 15th and 18th holes before prevailing in the first extra hole when Prom found trouble in the bunker.

“I got lucky there as Prom got into a bad spot during the play-off. I’m really looking forward to going back to Manila Southwoods to defend my title,” said Liang, who holds three Asian Tour victories.

“Last year I arrived only on Tuesday of the event week and played one practice round during the pro-am. Sometimes, when you get to a new place, you feel lucky. I also got lucky in the play-off. I plan to get to Manila a bit earlier this week to prepare well for my defense.”

He rated the Manila Southwoods highly, saying the pristine Jack Nicklaus-designed Masters course will offer the field a superb test of golf from November 20-23, 2014.

“It is an interesting course. There are many good holes. The par fives, you can reach in two for eagle chances, so the scoring opportunities are there,” said Liang.

The Resorts World Manila Masters is celebrating its second edition by raising the tournament’s prize fund to US$1 million this year, which is US$250,000 more than the inaugural edition in 2013. It is the richest golf tournament in the Philippines and one of three which features on the Asian Tour.

“There are a lot of interesting scenarios for this year’s RWM Masters,” said Stephen Reilly, Chief Operating Officer of Resort World Manila. “Whether Liang Wen-Chong is able to defend his crown or local hero Angelo Que finally breaks his title drought, one thing is for sure — this will be the grandest and most exciting golfing event in the Philippines to date.”

The Philippine challenge will be led by local stars Antonio Lascuna, Angelo Que and Miguel Tabuena.