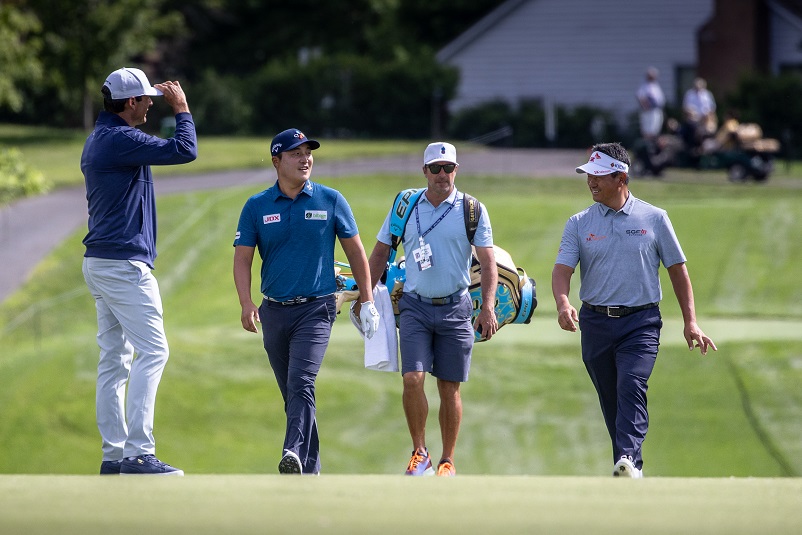 Asian golf legend K.J. Choi is tipping countryman K.H. Lee to start accumulating PGA TOUR victories under his belt after the latter barged through the door for a maiden title in the United States last month.

And he is also not discounting himself from doing a Phil Mickelson at this week’s the Memorial Tournament presented by Nationwide.

An eight-time TOUR winner, Choi, 51, has been an inspiration to many young Koreans over the past two decades and he made sure he was by the 18th greenside at TPC Craig Ranch to watch Lee win the AT&T Byron Nelson, even though the veteran star had missed the halfway cut.

Lee, the eighth Korean winner on the PGA TOUR, was surprised to see Choi amongst the gallery alongside 2019 Byron Nelson winner Sung Kang, and later labelled the trail-blazing Choi the “big daddy” of Korean golf.

Choi said: “I have known K.H. since he was young. Even when I was in the U.S, I heard about him and knew he had great performances as a national team member and a professional golfer. I didn’t want to miss his first win, so I drove to the club before his last putt. It was a strong field and winning under those conditions were amazing and it meant a lot to him.

“I wanted to celebrate with him in person, and not via a phone call. When I hugged K.H., I could feel he was shaking. Then I said to him “This is great. Now that you’ve won on the PGA TOUR with your hard work, you will get another soon.”

A rice farmer’s son, Choi defied the odds and worked his way to the PGA TOUR in 1999, becoming the first Korean golfer to earn playing rights on the world’s leading circuit. His victories include the 2007 Memorial Tournament, which is hosted by Jack Nicklaus, and the 2011 PLAYERS Championship, the TOUR’s flagship tournament.

Lee, 29, acknowledges he still has a long way to match Choi’s stellar career and he is simply happy to glean from Choi’s vast knowledge of the game. Lee played a practice round with Choi at Muirfield Village on Tuesday in hope of emulating his idol’s victory. Two years ago, Lee was the joint second round leader before finishing tied 37th.

“K.J. means so many things to us. He is the all-time legend and the reason Korean juniors dream of becoming professional golfers. He is the pioneer,” said Lee.

“I didn’t know K.J. was waiting when I won. I heard he had come all the way from home. I was very surprised to see him but at the same time, very thankful to have him watch me win. He said many nice things and it was just an honour to have him there. I mean, K.J. is always here … big daddy, so I’m very thankful and it means a lot to me.”

While he is eligble now for the over-50 PGA TOUR Champions, Choi still has the fire burning in his belly and hopes to emulate Mickelson’s stunning victory at the PGA Championship two weeks ago which made the American the oldest major champion just shy of his 51st birthday.

“It motivated me a lot,” said Choi, who finished joint third in the KitchenAid Senior PGA Championship last weekend.

“It was amazing Phil kept his focus and physical condition to win the PGA at age 50. He still has his own swing tempo, physical condition and mentality. It is awesome. I think I need to be prepared and be able to compete with the young players.

“It’s been 13 years since I won here at the Memorial … I can’t believe it. If I can win this one more time, it would be great and rank as one of the greatest days in my life. It is a great honour to have this chance to play in a great tournament hosted by one of the legendary golfers, Jack Nicklaus. I learned about golf by reading his book (Golf My Way),” added Choi, who is playing on a sponsor’s exemption this week.

Lee is keen to carry his winning momentum to the Memorial, which he rates as being amongst his top-two favourite stops on TOUR. “One is THE CJ CUP and the other is the Memorial Tournament. I’ve had a lot of good memories at Memorial, it’s a nice golf course and I always feel comfortable here,” he said.

Spaniard Jon Rahm will defend his title against a stellar field including Justin Thomas, Bryson DeChambeau, Collin Morikawa and Masters winner Hideki Matsuyama, whose first PGA TOUR victory was at the Memorial in 2014.