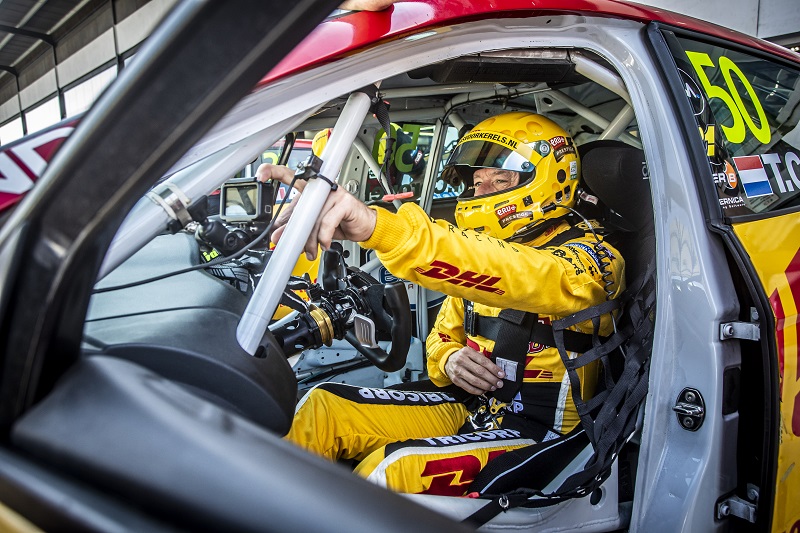 *The Showman of the WTCR prepares for new season with a significant milestone in mind *Remaining with Comtoyou, he switches from CUPRA to Audi power, again with DHL backing *Coronel: “We should be ready to be more up the grid this year”

You were won of the first drivers to race again after lockdown restrictions eased when you took part in the 24 Hours of Portimão back in June. How did that go?
“It went very well because we finished on the podium. But it was just nice to be back in a race car again and also in the race car that you are focused on for the season. I drive everything what has four wheels but the focus was on the Comtoyou Audi and this was important. I had to get some rush out of myself but we also used it as a test for the team and the car. It’s always good to have a long-distance race in that case and it was good to have my car in the livery I will use in WTCR. There was no racing going on at the time so it was good to have my content already flying around. That worked out very well because it was the first international race and on a nice track with good competition between the drivers Nicolas Baert and my new team-mate Nathanaël Berthon. It was a good atmosphere to start to understand each other to drive the car for the team.”

Where did you finish?
“We finished second. We had one small difficulty, a bracket on the splitter broke and that’s why we lost 80 minutes in the pit. That was a pity, but otherwise we were in competition for the lead because the first hour we were leading the race. But we were on the podium, we took the trophy home which was a good feeling and nice reward. It was strange to be racing again but I was happy we could do it even though the travelling was an intense experience, with a lot of nervous people. I had a lot of jealous race car drivers on WhatsApp! I was happy and felt like a kid walking around the candy story.”

Having raced the CUPRA TCR in the 2019 WTCR you’re switching to the Audi RS 3 LMS for 2020. Has it been a seamless transition?
“We had done a shakedown at Spa-Francorchamps with my own car [before Portimão] and I expected it to be more the same as the CUPRA but, feeling wise, it was different. The basic of the car of course is the same as my car from last year, but because of the weight distribution and aerodynamics, the Audi feels different. But I got used to the car quite easy and I should be ready for the new season and to be more up the grid than we were last year.”

You’ve had the chance to sample the new Goodyear tyres. What were your first impressions?
“I drove on the Goodyear in Spain when we did the first test before lockdown. I like the tyre a lot. It was consistent and I had a good feeling with the tyre. My personality is entry speed and I felt very well with this tyre.”

You know Comtoyou Racing having worked with them last year, but as well as a new car you have a new team-mate in Nathanaël Berthon. How’s the relationship going
“I knew Berthon a little bit as an opponent but the race in Portimão was the first time we were driving together and it was good to start the season not directly in full competition but to have the chance to, how should I say, sniff each other, to have a little feel for who is who and why. When he was driving two years ago in WTCR I had already some contact with him but we feel like we’re team-mates now and also because we absorbed him in my yellow livery and that’s also a good case of course to have the team in one look. I know we can work together and the long-distance race was an important part because you have to work together. In WTCR you are alone so you are a little bit more selfish so it’s good to start the relationship the way we did.”

How important is it to race again with Comtoyou in terms of the continuity it brings?
“Racing with the same team for a longer time is important. Last year, Comtoyou and me was a good match. The co-operation was pleasant for both sides and now we have made the switch to Audi and the team has experience with this brand.”

What’s the story behind the number change for this season because, having raced with number 50 in 2019 to mark your partner DHL’s half-century celebrations, you will use 31 in 2020?
“I sat down with a few people to analyse my history in racing. When you take into account the series that preceded the current WTCR [ETCC, WTCC], my race with the Carly Motors BMW at Estoril and the European TCR races, it adds up to 413 races. There is nobody else to have been racing in this championship for so long. When you also add my other touring car races, like the ones with the Citroën AX, the BMW in the Dutch Touring Car Championship and more, the total is 484 races. With 16 WTCR races scheduled for the upcoming season, plus some other races, my total will exceed 500 touring car races this year. A unique feat that we will be celebrating accordingly!”