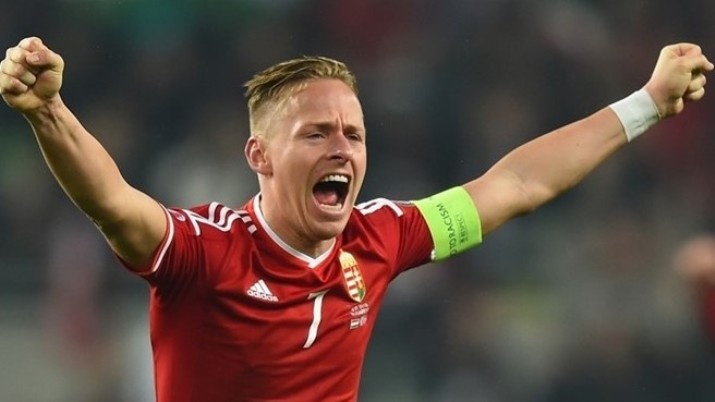 Balazs Dzsudzsak roared the words that inspired Hungary to a play-off win and a place in a major tournment for the first time in three decades.

“We might never have this chance again, no-one’s going to stop us qualifying! Not Norway, not even the best team in the world!” Dzsudzsak (pronounced ‘Joo-jak’) shouted at his team in the dressing room in Budapest last November.

A little over 90 minutes later Hungary had beaten Norway 2-1 to qualify for their first European Championship since 1972.

“Our hair was standing on end, Dzsudzsak was like some kind of demi-God, a real leader,” said a backroom staff member who witnessed the pre-match speech.

After the whistle, the 29-year-old, who was not even born the last time Hungary made it to a major tournament (the 1986 World Cup), led fans in in an emotional singing of the national anthem.

Tears streaming from his eyes, the long-awaited qualification had been a carthartic moment for the blond winger and the nation.

For almost a decade Dzsudzsak has been Hungary’s talisman, their most valuable player, and the nearest the Magyars have come since the 1980s to producing a star.

A baby-faced village boy from remote eastern Hungary, his breakthrough year was 2007.

Dzsudzsak’s speed, pinpoint crossing and goalscoring threat, particularly from dead-balls, made him a key figure for Debreceni VSC in the third season of a three-in-row title winning run.

A scout from Dutch giants PSV Eindhoven had noticed, and Dzsudzsak made his Eredivisie debut in 2008, delighting success-starved Magyar fans who watched his games broadcast live on Hungarian TV.

Top scorer for PSV in the 2010 and 2011 seasons, their fans loved the way he tormented arch rivals Ajax: he nicked five goals and three goal passes against the Amsterdam side in seven games.

After 55 goals in three and a half seasons in Holland, Dzsudzsak was drawing comparisons with Dutch legend Arjen Robben, and the attention of clubs including Juventus, Liverpool and Villareal.

Aged 24, he seemed poised for a leap into the big time, but dismayed fans back home yearning to see a Hungarian at the very top when he opted for a move to the ambitious and cash-rich Russian Premier League side Anzhi Makhachkala.

“It’s true I didn’t go to a top club as many were expecting of me,” Dzsudzsak said. “But this club has a bright future, within four years it will be doing well in the Champions League”.

It was not to be. After an injury-plagued spell and just eight appearances for Anzhi, Dzsudzsak was sold to Dynamo Moscow in 2012, but scored just 19 goals in three years.

Let go this season to Bursaspor in Turkey, the Hungarian’s form has been patchy, leading to periods on the bench, and some fans complaining about his work ethic.

In contrast to the waning of his club career, his performances for the national team have improved with age.

Accused in the past of under-performing for the national team, he was handed the captain’s armband in 2014, and rescued a floundering Magyar Euro 2016 qualification campaign with a free-kick equaliser to win a point against bitter foes Romania in Bucharest.

In France, Hungary are rank outsiders, but their opponents will surely have Dzsudzsak top of the list of Hungarian dangermen. – Agence France-Presse