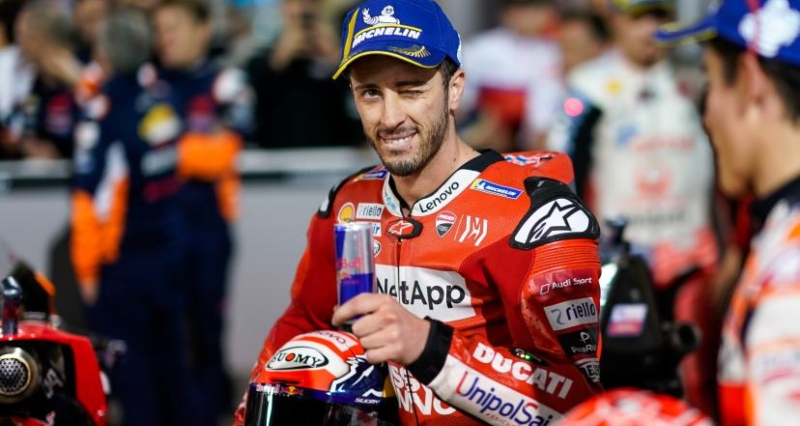 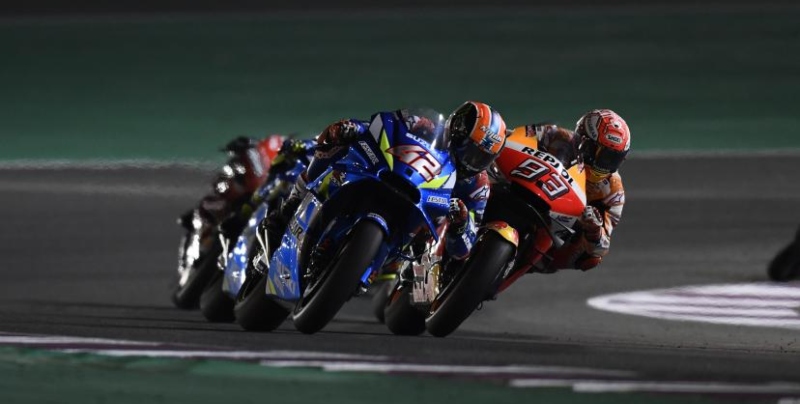 Italian beats Marquez to the line as Crutchlow grabs a podium, Rins and Rossi within 0.6 of the win in a crazy opening race of 2019

There was drama before the lights went Losail as fifth place qualifier Fabio Quartararo (Petronas Yamaha STR) stalled his bike as they pulled off for the warm up lap, the rookie having to start from pitlane.

It was Dovizioso who got the launch off the line with the new ‘holeshot’ device working to full effect as both he and Jack Miller (Alma Pramac Racing) grabbed P1 and P2 into Turn 1, Marquez held position in P3 with Maverick Viñales (Monster Energy Yamaha MotoGP) not getting the start he would have been aiming for from pole – P1 to P6 on the opening lap, with Takaaki Nakagami (LCR Honda Idemitsu) and teammate Cal Crutchlow (LCR Honda Castrol) getting themselves into the top five.

There was more drama on the second lap as Miller, running in P2, seemed to have an issue in the final sector. The Australian having to sit up on the racing line as he appeared to remove part of his seat before continuing, the Ducati dropping to P11 in strange fashion.

The race then settled into a rhythm, with Dovi controlling a steady pace at the front as tyre management started coming into play. Rins was the man on the move on Lap 4 as the Spaniard made a sharp start from P10 on the grid, the Suzuki man coming through to take the lead Lap 5. Dovi and Rins then exchanged P1 on numerous occasions for several laps, the Suzuki passing the Ducati in the middle of the lap before Dovi used the Ducati grunt to power back past on the start/finish straight – a lead group of nine following each other line astern as we looked set for an epic desert duel.

On Lap 12, with Dovi back at the front, the pace then turned up a notch as Dovi and Marquez started to create a gap back to third place Danilo Petrucci (Mission Winnow Ducati). However, the pace then slowed again, Dovizioso going from a 1:55.3 to a 1:56.1 to bring the top eight back to just over a second.

With seven to go, the top eight were covered 1.2 seconds as Rossi started to make up ground, picking off his teammate and Joan Mir (Team Suzuki Ecstar) to go up to P6. With three laps to go the fight for the win became a five-way scrap, with Petrucci, Viñales and Mir losing touch.

And so, heading into the last lap, Dovi powered past Marquez into Turn 1 after the reigning World Champion had got the better of his rival on the penultimate lap, with Crutchlow P3, Rins P4 and Rossi P5. Pushing hard, Marquez had a slight moment with the front at Turn 3 before making a lunge up the inside of Dovi at Turn 10, but the Desmosedici was able to cut back up the inside on the exit.

A carbon copy of 12 months ago then played out at the final corner, with Marquez diving through, sitting up Dovi, running wide, with the latter being able to get the drive and power past the Honda on the exit to edge the number 93 to the line by 0.023 seconds. Behind, Crutchlow kept his cool to take a remarkable podium on his first race back since his huge Australian GP crash, with Rins a valiant P4 and Rossi again proving you should never count ‘The Doctor’ out in P5 from P14 on the grid.

Petrucci would have to settle for P6 on his maiden factory Ducati ride, 2.320 the Italian finished behind his teammate in the end, with polesitter Viñales crossing the line 0.161 back from ‘Petrux’ in P7. Mir produced a fantastic rookie ride to finish just over five seconds off the race win in P8, the Spaniard beating ninth place Nakagami and tenth place Aleix Espargaro (Aprilia Racing Team Gresini) – 9.636 covering the top 10 in Qatar.

Wow, caught your breath back yet? What a way to open 2019 as MotoGP™ treat us to an absolute classic in Qatar. Is it time to go to Argentina already?

BMW i Andretti Motorsport preview for the Mexico City E-Prix