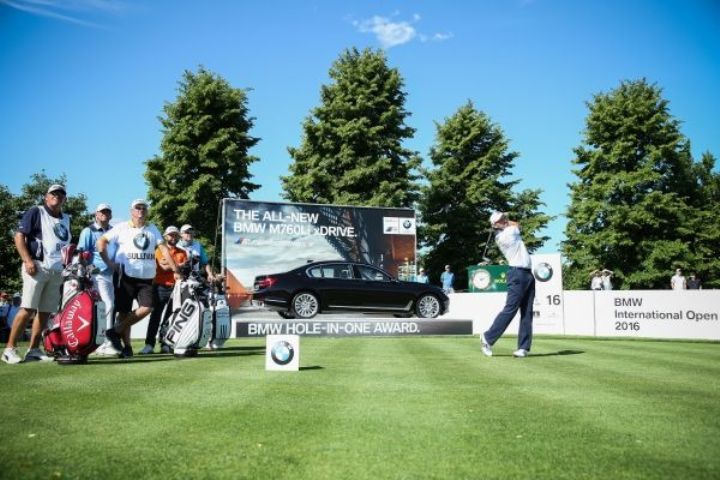 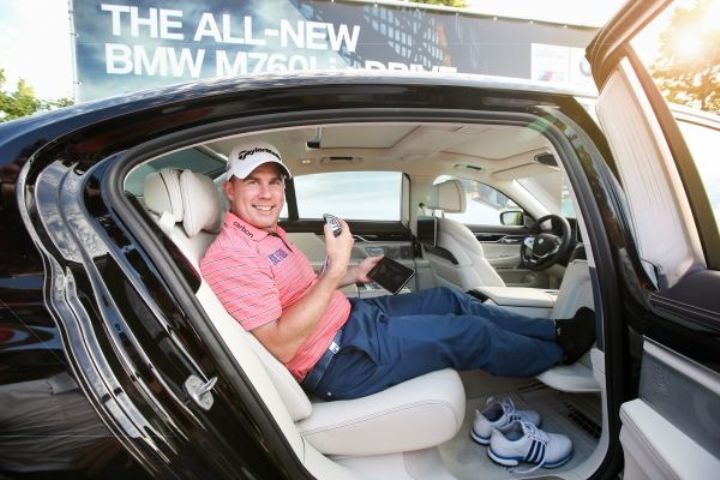 The opening day of the BMW International Open (23rd to 26th June at GC Gut Lärchenhof) was full of fascinating stories. At the heart of one such story was the traditional BMW Hole-in-One Award, which was up for grabs on the 16th hole this year.

Scotland’s Richie Ramsay was the first to seize the opportunity, acing the 182-hole with a dream seven-iron on the opening day of the tournament. In a year, in which the BMW Group and the BMW brand celebrates its centenary, his reward was fittingly spectacular: the new BMW M760Li xDrive, worth more than 170,000 Euros.

While Ramsay (71, -1) ended the day as a proud member of the BMW family in 39th place overall, France’s Raphaël Jacquelin (65, -7) sits on top of the leaderboard going into day two. Bizarrely enough, it was he who won a BMW with a hole-in-one at the BMW International Open 15 years ago.

The BMW Z8 he won back then has now racked up over 30,000 kilometres and Jacquelin’s four sons are waiting longingly to finally get to drive the car that featured in the James Bond film “The World Is Not Enough”. “It is a long time since I have led a tournament,” said the winner of the 2007 BMW Asian Open. “I am still working very hard on my game. As you can see, the hard work is paying off.”

Ramsay was delighted with the latest top model in the BMW 7 Series range, which features a 12-cylinder M Performance TwinPower Turbo engine generating 610 hp, and sets new benchmarks for sporty, luxury saloons. “Even as the ball was in mid-air I thought ‘CAR’, but I didn’t say anything as I thought might be a jinx. And then it disappeared,” said Ramsay, who has three European Tour wins to his name. “This car is beautiful. You can just lean back and it feels like you are in a business class seat of a plane. It is a fantastic feeling, and I’d like to say a huge thank you to BMW. It is a fantastic prize.”

Behind the leader Jacquelin and second-placed Oliver Fisher (ENG, -6), a host of top stars are queuing up to mount a challenge over the coming days. They include Thorbjørn Olesen (DEN, -5), Austria’s BMW Golfsport Ambassador Bernd Wiesberger (-4), defending champion Pablo Larrazábal (-4), and Henrik Stenson(-4). Spain’s Sergio García is also lurking within striking distance following an opening round of 71 (-1).

The best-placed Germans at the end of day one are BMW Golfsport Ambassador Max Kieffer and Bernd Ritthammer (both -1). It was a day of highs and lows for Kieffer, in particular. An eagle and five birdies were all-but cancelled out by a bogey, a double-bogey and a triple-bogey. “I fought very hard and kept very calm. I think I deserved a much better score, but golf is not always fair,” said Kieffer after a round played in glorious sunshine and with temperatures well over 30 degrees Celsius.

Because his luggage was lost on the journey back from the U.S. Open, he had to play with borrowed clubs on Thursday. “My form is not fantastic anyway at the moment, and it obviously doesn’t help when you have to use a different putter. On the whole, however, it actually worked out quite nicely.”

The experienced Alex Cejka (Par) is tied in 63rd place with fellow Germans Philipp Mejow and amateur Jeremy Paul. Marcel Siem (+1) follows in 82nd place, level with the second of the two Paul twins, Yannik. Jeremy and Yannik Paul are the first twins in the history of the European Tour to play at the same tournament.