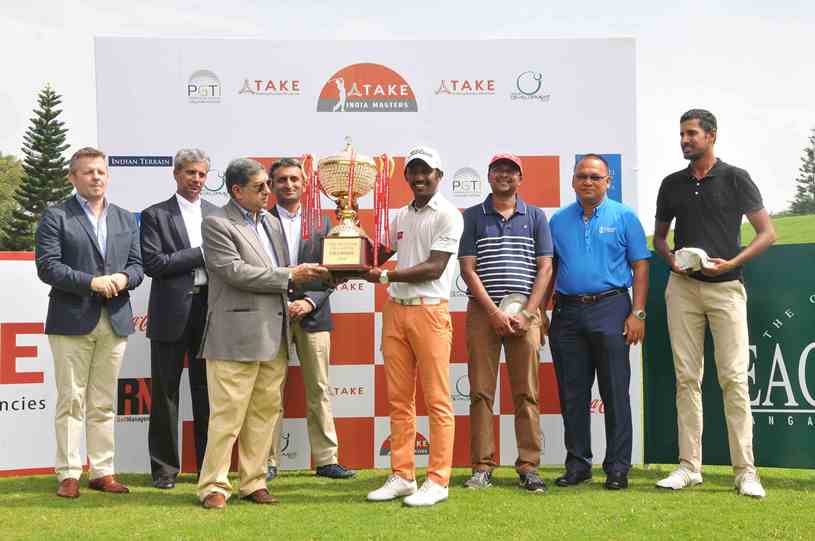 India’s S. Chikka capped an emotional week by winning the inaugural US$70,000 TAKE Solutions India Masters with a final round five-under-par 67 on Saturday.

The Indian immediately dedicated his dramatic Asian Development Tour (ADT) victory which he won with a four-day total of 18-under-par 270 to his late grandfather who passed away last week.

Overnight leader Abhishek Jha of India uncharacteristically surrendered a six-shot lead and had to settle for second place after he closed with his week’s highest score of three-over-par 75 at the Eagleton Golf Resort in Bengaluru.

Sweden’s Nils Floren took third place by carding a 67 for a 274 total while Ireland’s Niall Turner and India’s C. Muniyappa are tied for fourth after signing off with matching 275s at the first ADT event to be launched in India.

Victory was especially sweet for Chikka as he was out of sorts following the loss of his grandfather upon his return from Macau last week.

It took the sound advice of his family to finally ease the emotional burden which eventually left him with the right frame of mind to compete.

“This win is for my grandfather. I could not help but look up to the skies as I’m sure he was watching over me from above. When I came back to Bangalore this week, my mother and grandmother spoke to me and asked me to focus on my game.

They also told me that that is what my grandfather would’ve liked me to do had he been around. Their words really inspired me and I slowly got my confidence back,” said Chikka

Playing in the final group with Jha, Chikka birdied three and eight to turn in 34.

He continued his birdie blitz with another on 10 and with Jha struggling to hold on to his overnight lead, birdies on 15 and 17 ensured the 21-year-old would lay claim to the TAKE Solutions India Masters title.

“I took my chances well and I was really determined to close the gap on Jha as I was six shots behind. I put the pressure on him especially on the home stretch and it paid off. With this win on the ADT, I’m definitely looking for better things to come as I will continue to develop as a player and hopefully get more wins!” said Chikka.

Jha started the day perched atop the leaderboard with a commanding lead.

However that advantage was quickly reduced when he bogeyed on holes three and four. He got a brief reprieve when he birdied 10 but stumbled again with a bogey on 12 followed by a double-bogey six on 16.

Despite a birdie on 17, it was all too late as Chikka had already secured a two-shot advantage going into the closing hole which they both parred.

“I’m at a loss for words and I guess the nerves got the better of me. I didn’t play well at all today and just couldn’t cope with the final day pressure. On the brighter side, this is a lesson learnt and hopefully I’ll emerge stronger,” said Jha.