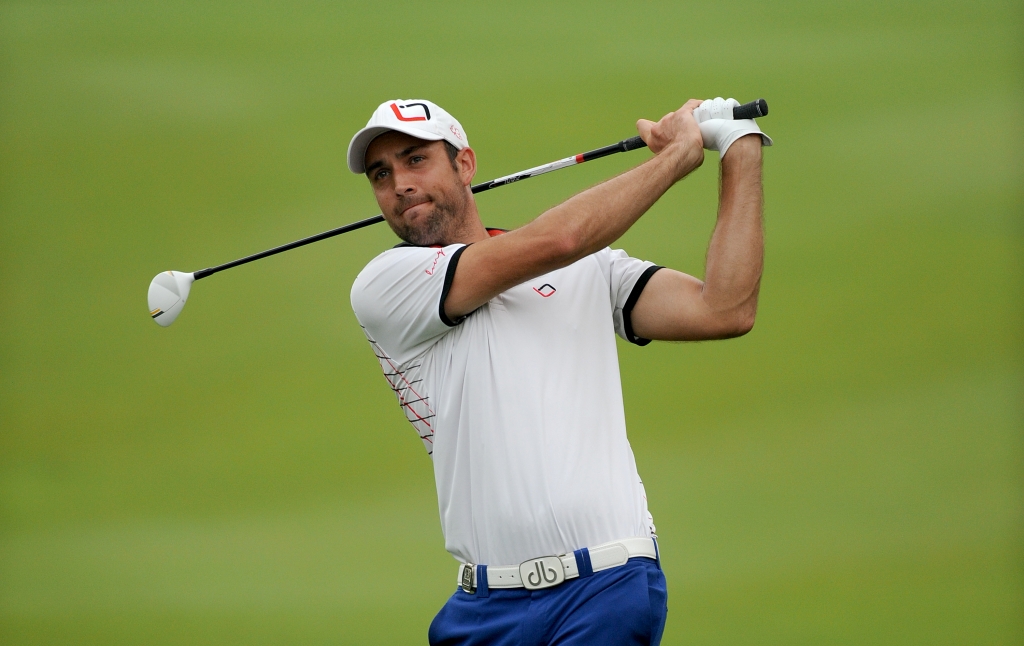 England’s Steve Lewton continued his consistent form by carding a two-under-par 70 to lead by one shot in the third round of the US$650,000 Mercuries Taiwan Masters on Saturday.

Lewton got off to a great start when he fired three straight birdies starting from the fifth hole before dropping a shot to turn in 34. He then traded one birdie and one bogey on his way home for a three-day total of four-under-par 212 at the challenging Taiwan Golf and Country Club’s Tamsui course.

Filipino veteran Antonio Lascuna signed for a second straight 69 to move into a share of second place alongside overnight leader Adilson Da Silva of Brazil, who posted a 72, in the long-running Mercuries Taiwan Masters, which is celebrating its 28th edition.

Tour rookie Cameron Smith of Australia, ranked 11th on the Order of Merit, and countryman Unho Park are in prime position to win their first Asian Tour title after shooting identical 70s to share fourth place on 214.

Thaworn Wiratchant of Thailand, a two-time Order of Merit champion and a winner here in 2004, Rahil Gangjee of India and Javi Colomo of Spain were a further shot back in tied sixth position.

Lewton was surprised with his lead as he had previously failed to make the cut in 2012 and 2013. However, his past experiences on this course have spurred him on to contend for a first Asian Tour title.

“I got off to a really good start. The three consecutive birdies from the fifth hole kind of got my round going. I think I’ve learnt to play the golf course a little bit after missing the cuts in the last two years. The grass here in Taiwan is very different from what I grew up playing on back home in England. It has taken me a few rounds to get used to it,” said Lewton.

Lewton has enjoyed a great start to the season where he posted two top-10s and he hopes to translate that good form into a win.

“It had been good for me so far. I enjoyed the course, the weather and being in Taiwan. I am just going to stick to the same game plan tomorrow and continue to do what I’ve been doing,” added the 31-year-old.

Lascuna hopes to erase the heartbreak of missing out on his maiden Asian Tour title after losing in a play-off to Thailand’s Chapchai Nirat in Malaysia two weeks ago. The Filipino, ranked fourth on the Order of Merit, has a good track record in the Mercuries Taiwan Masters where he previously finished second in 2012 and tied for eighth last year.

“I was really excited after the front nine but I kind of lost the momentum after the bogey on the 12th hole. Overall, I am still very happy with my round. I don’t want to give myself any pressure tomorrow. I just want to enjoy my game and try my best,” said the affable 43-year-old Filipino veteran.

Adilson, who started his round with a one-shot advantage, failed to match his second day heroics but is confident that he can produce another low round if he stays patient.

“I just couldn’t get myself into the game today as compared to how I did yesterday. I couldn’t hit it straight as well with the strong winds getting in and out. I felt like I was hitting good shots but ended up a bit too short or a bit too long.

“I think that got into me slowly but I hung in there. I still made good shots and I putted well. It wasn’t easy. It was tricky out there. I just have to try and stick to my game tomorrow and try not to get frustrated out there. It’s not easy to do that but I’m playing well. Patience would be the key tomorrow and I will try to hit shot by shot,” said the Brazilian.

Scores after round 3 of the Mercuries Taiwan Masters 2014 being played at the par 72, 6923 Yards Tamsui Course course (a- denotes amateur):