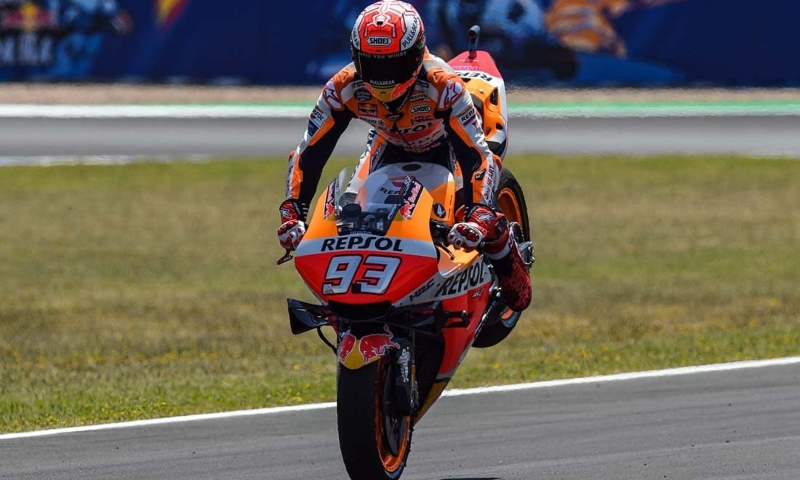 Five riders and four factories have conquered the venue in recent years. Here’s to another modern classic in the UK

In 2013 it was Jorge Lorenzo (Repsol Honda Team) who took on now-teammate Marc Marquez in one of the all-time greatest showdowns. The year after, Marquez returned the favour. 2015 saw Valentino Rossi (Monster Energy Yamaha MotoGP) emerge from a rain-soaked race day to take to the top step, before Maverick Viñales, now at Monster Energy Yamaha MotoGP, took the spoils for Suzuki the year after. Then it was Andrea Dovizioso (Ducati Team) painting Silverstone red in 2017, and that makes it five riders and four factories who have made British turf their own in the last five races there. They’ve also all done it in style, because Silverstone usually stages a classic. Can 2019 deliver the same?

As we return to the venue for another year, there’s certainly one big difference: the track surface. The British behemoth is back open for business with high expectations and new asphalt, and Friday’s feedback will be an interesting listen. But one thing that’s never changed is the stunning layout, with 18 corners pushing man and machine to the maximum around a high-speed ribbon of tarmac that snakes it way around the former airfield. Vast and fast is apt.

Ahead of the 2019 British GP, BT Sport analyse what went wrong last year and what the circuit have done to prepare for this year

So who will rule Britannia in 2019? Almost all the likely contenders really have been a winner in the UK. The most recent victor, Andrea Dovizioso, also arrives on top of the world after his stunning Austrian GP victory. He’ll be one to watch, as is usually the case. But then so will Marquez, who has sometimes had a rockier road on race day at Silverstone but whose pace in qualifying has seen him take four premier class poles at the venue. Could we get another duel? Will the reigning Champion strike back?

Yamaha’s Valentino Rossi and Maverick Viñales, meanwhile, will be aiming to make sure it’s a much bigger fight at the front. Rossi’s speed at Silverstone seems to grow year on year and Viñales’ record at the track is impressive. He won his first race there so there are some good memories, and he was also the man closest to Dovizioso last time we raced in the UK. And then there’s Fabio Quartararo (Petronas Yamaha SRT).

Why is ‘El Diablo’ so much faster than the other Yamaha riders? ‘The Doctor’ gives his verdict

The French rookie will know the venue has often been a good one for his bike, but does that even make that much difference? The number 20 equalled Yamaha’s best result at the Red Bull Ring, where it should have been a much harder task than he made it look, and everywhere he goes, he goes fast. He’s back at the top of the Independent Team rider standings as well, and could be one to watch.

And what of Alex Rins (Team Suzuki Ecstar)? His bike is a winner at Silverstone, before he was the man on it or even in the class, and it was a landmark day back in 2016 for the Hamamatsu factory. Rins is now back on form after ironing out two uncharacteristic mistakes before the summer break, and he’s unlikely to settle for anything that’s not an assault on the win at the very least. He’s a man with a bigger box to tick than many now he’s taken his first win this season, and is a big candidate to be the sixth different winner at Silverstone since 2013.

Spaniard gets superb first premier class win at Silverstone, Suzuki’s first victory since 2007, with Crutchlow and Rossi also on podium

The man just ahead of him, Ducati Team’s Danilo Petrucci, could be another although he’s looking for more of a bounce back after a tough Austria, as is Jack Miller (Pramac Racing), the man now behind Quartararo in the aforementioned Independent Team rider standings. And lurking just behind him is Cal Crutchlow (LCR Honda Castrol). It’s been a tougher year at times for the Brit, but on home turf he’ll give it everything to be back in the fight at the front he’s so often been part of. And he’s had pole at Silverstone before, so the speed is there and he’ll want to convert it into big points and a podium in front of the home crowd. He’s done it before.

The man for whom a return is the real key phrase, however, is Jorge Lorenzo. After a long period of recovery from his injuries sustained in Assen, the five-time World Champion is expected back on track at Silverstone and it’s a good venue for it. Lorenzo has three wins there, including that stunner in 2013, and good memories are aplenty. Joan Mir (Team Suzuki Ecstar) is also back in action at Suzuki after his Brno testing crash, so he’ll want to get stuck in to making up some ground to those ahead of him: the likes of Franco Morbidelli (Petronas Yamaha SRT), Pol Espargaro (Red Bull KTM Factory Racing) and Takaaki Nakagami (LCR Honda Idemitsu). There’s a lot at stake in the tight fight for the top ten.

Watch the battles you missed at Brno and Spielberg14/08/2019

Whilst the fight for the front with raged, what did we miss further back at the Czech GP and the Austrian GP?

The Great British behemoth awaits, and the Great British weather is in the wings too. But come rain or shine, Silverstone usually serves up a storm – so tune in for the GoPro British Grand Prix, with lights out for MotoGP™ at 13:00 local time (GMT +1).