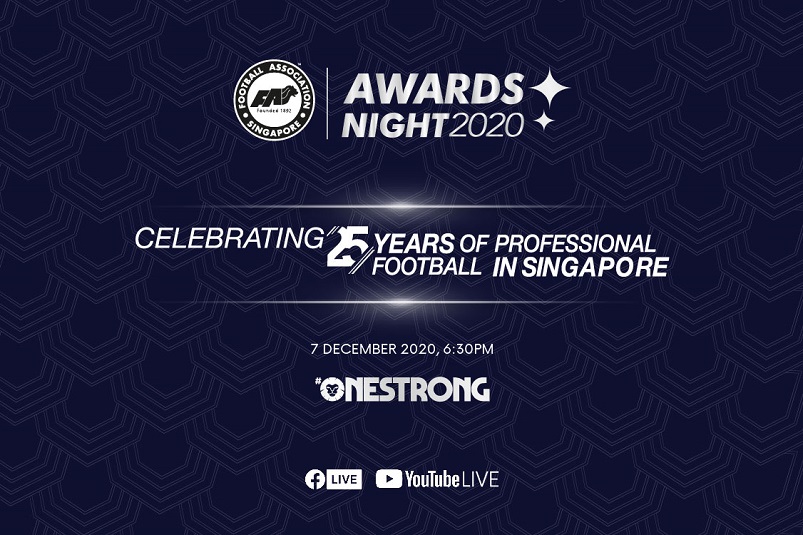 The crème de la creme of the 2020 AIA Singapore Premier League (SPL) season will be honoured at the Football Association of Singapore (FAS) Awards Night 2020.

An annual event that brings the local football fraternity together, this edition also celebrates the resilience and courage displayed by all involved amid trying times during a year that has been severely impacted by the COVID-19 pandemic.

The Awards Night will take place on Monday, 7 December 2020 at The Gym, located at Jalan Besar.

With the SPL having successfully concluded its 25th season, outstanding individuals from the campaign will be recognised across nine categories.

The winners were selected by a judging panel comprising the General Manager, Head Coach and Team Captain from the eight SPL clubs participating in the 2020 season as well as FAS Technical Director Joseph Palatsides and National Team Coach Tatsuma Yoshida.

The FAS will also be paying homage to six individuals, including National Team Captain Hariss Harun and Tampines Rovers FC’s Jordan Webb, with Special Recognition Awards to acknowledge their contributions to local football.

Hariss and Jordan will be feted for their century milestone achievements, with the former obtaining 100 international caps and the latter scoring 100 goals in the professional league since his debut in 2010.

In light of the current safe-distancing measures, this year’s event will be attended only by relevant personnel, such as all award winners, presenters and essential event crew.

As with previous years, the Awards Night will be streamed “live” online on the FAS Facebook page to allow fans to follow the night’s proceedings with anticipation.

The Croatian is also a strong candidate to take the AIA Player of the Year gong but the mercurial Lion City Sailors FC forward will face stiff competition from team-mate Gabriel Quak, who is the top local-born scorer with five goals and tops the assists chart with seven.

Albirex Niigata FC (S) star Tomoyuki Doi, a key figure in his side’s title triumph, will challenge the Sailors pair for the award.

The Sailors also have a nominee for the AIA Young Player of the Year award in midfielder Saifullah Akbar, who is joined by Young Lions captain Jacob Mahler and Geylang International FC left-back Harith Kanadi.

Meanwhile, the Singapore Pools Coach of the Year title will go to one of Albirex’s Kenji Shigetomi, Tampines’ Gavin Lee or Sailors’ Aurelio Vidmar.

There will also be a Team of the Year presentation to recognise the best 11 players in a 4-4-2 formation.