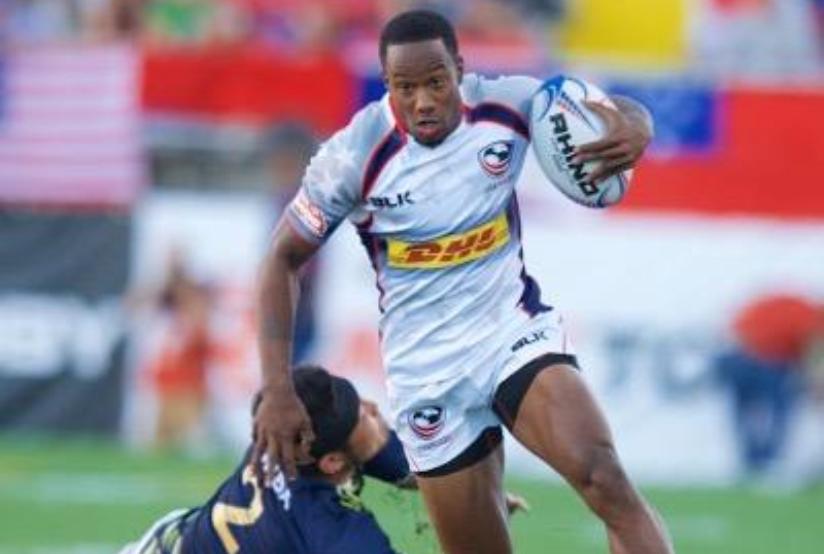 But instead of lining up against Jamaican sprint king Usain Bolt in Rio de Janeiro, Isles will be going for gold with a rugby ball.

The flying winger is one of the most potent weapons in the United States’ sevens squad, which will be chasing rugby gold as the sport returns to the Olympics after a 92-year absence.

Four years ago, Isles was a promising sprinter with dreams of competing in the Olympics, with a respectable personal best of 10.12 seconds for the 100m, a time that would have got him into the semi-finals of the 2012 games.

But the realisation that he might end up dedicating his life to track and field yet still not reach the elite level prompted him to look elsewhere.

By chance, he stumbled across rugby during a search for a workout routine on Youtube, and wondered whether his skills would translate to the sport.

Impulsively, he fired off an email to the then chief executive of USA rugby, Nigel Melville, eager to know more.

“I figured, ‘He ain’t gonna get back to me. He won’t care’. I prayed to God and said ‘Give me a sign’. And the next morning, at like seven in the morning the phone rang. It was Nigel,” Isles told AFP.

Four days later, Isles was on a plane to Colorado to begin his rugby education.

“All I needed was a chance, a shot. But it was all or nothing. There was no ‘Plan B’. It had to work out. I remember crying and thinking ‘If this don’t work out you are screwed.’ It was a big sacrifice.

“I didn’t know no rules, no nothing. I didn’t even know I had to pass off my left or right hand.

“I learned as much as I could.”

His legend took off in late 2012 when a Youtube video showcasing Isles’ speed went viral.

To date, the video has garnered nearly seven million views.

If Isles’ conversion to rugby seems improbable, it is entirely consistent with his life story.

He has been battling the odds — successfully — ever since a troubled childhood in Ohio which saw him placed in foster care at at an early age.

One of his earliest memories is seeing his mother bundled away in the back of a police van at the age of six.

“A bunch of cops all over us. They put my mom in a paddy wagon. They put us in the police car,” he says softly.

“I remember I got out of the police car and noticed those little flowers. What are they called? Daisies? I picked one of them and gave it to her.

“And it’s the last thing I remember about her. Giving my mom that flower. She was in handcuffs. I was six. That was the last time I saw her.”

The fear of failure, has been an undercurrent throughout Isles’ life.

“The biggest fear is waking up and seeing someone in the mirror you’re not supposed to be,” he said. “Fear drove me to succeed.

“I always like watching ‘Rocky’ movies. Because I can relate. He struggled. He’s a nobody. Nobody believed in him.”

Friends and loved ones had doubted the wisdom of his conversion to rugby.

Although Isles had been a talented American football player, trying out with the Detroit Lions, many feared for his safety on the rugby field.

“People thought I was crazy. They were like ‘Rugby? Is that with no pads? You’re going to get killed!’. People were like ‘What are you doing’ and sometimes I had to ask myself ‘Yeah, what am I doing?’.