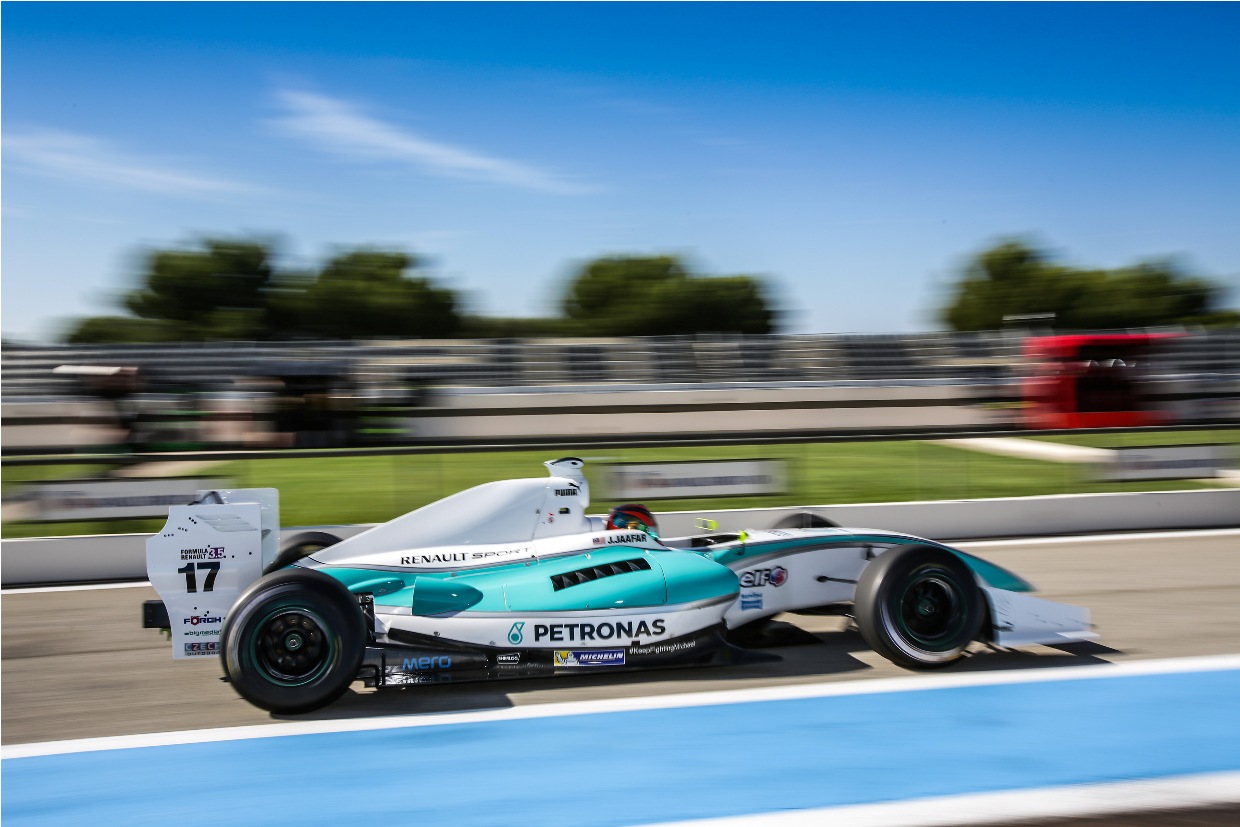 Jazeman put in a strong performance today with a fourth place in qualifying and fifth place race finish at Paul Ricard circuit, in the eighth round of the Formula Renault 3.5 Series.

The opening day of practice was held under blue skies and bright sunshine, with track temperature high throughout the day.  In the opening session Jazeman re-acclimatised himself to the Paul Ricard circuit, finishing with 12th quickest lap. Jazeman then reviewed the data with his engineer and after making a few changes to the car set up was back out on track for the afternoon session. With ambient temperatures rising most of the drivers were quicker in this session and after 19 laps Jazeman had posted a strong third fastest lap, just 0.164 seconds from the quickest driver.

It was another sunny day for qualifying for the first race on Saturday morning. After all the drivers had completed their flying laps, using two sets of new tyres to set their qualifying times, Jazeman had posted ninth quickest lap, and with the top 15 drivers all within a second, the time sheet showed very close competition for pole.

Jazeman lined up on the fifth row of the grid for the start of the first race later in the day and as the lights went out, he was off the line and battling hard into the first corner. With the cars four abreast there was plenty of jostling, with Jazeman losing out, after being tapped into a spin and off the track, forcing immediate retirement for the PETRONAS-supported driver.

The second and final day of the Paul Ricard weekend was once again bright and sunny. Jazeman was on track for qualifying early in the day and, putting his bad luck of Saturday behind him, produced a series of stunning quick laps to line up fourth on the grid for the second race.

Jazeman made a great start and in the run down to the first corner passed fourth placed Sergey Sirotkin to take third. On the second lap he was challenging Pierre Gasly for second, running through the corners side by side, but this tense fight let Roberto Merhi sneak through into third.

Pitting from fourth, Jazeman had a quick tyre change from the ISR Racing crew and he exited the pitlane just behind Oliver Rowland, who had made an early stop and had the advantage of fresh rubber. Jazeman diced with Merhi for position, corner after corner, and after all the cars had pitted was lying in fifth place.

The second part of the race saw little change of order throughout the field, although Jazeman was continually challenging Merhi for fourth place and in the latter stages had Max Vaxiviere closing in on him. With tyre degradation a major factor at the Paul Ricard circuit, Jazeman had to balance challenging Merhi with preserving his tyres until the finish. The young Malaysian never gave up in his pursuit of fourth place and pushed until the chequered flag.

“That was a tough race,” said Jazeman, “but it felt great to be back at the front and racing in the top five. The early part of the weekend has had its ups and downs, so today, with a good qualifying session and a strong points finish, is what I needed. This isn’t an easy track to pass on, but I tried wherever I could to get past Merhi, but he made his car very wide and with this, as well as the tyre degradation.  I just couldn’t make any of the challenges stick. It was great to have the car underneath me to be racing hard like that, now I want to finish the season on a high note in Jerez later this month”.

Jazeman will race in his final Formula Renault 3.5 Series weekend of the season at Jerez from 17 – 19 October.