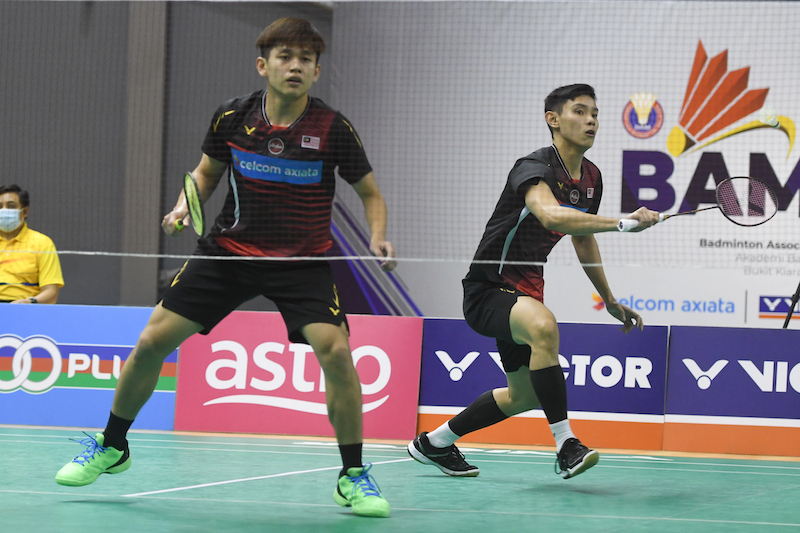 Malaysian youngsters Low Hang Yee-Ng Eng Cheong made a storming start to 2021 when they coast to a first-round win in the men’s doubles at the Swiss Open.

But the win was not easy for Hang Yee-Eng Cheong when they were fully stretched to three sets before confirming their victory over Dutch duo Ruben Jille-Ties Van Der Lecq 21-16, 16-21, 21-16.

“Today was our first match after almost a year of not playing competitively. But we were not thinking too much about the match, we just tried to put up our best possible game,” said Hang Yee.

“In the second set, our opponents changed their pattern and that caused a bit of confusion. But we rallied in the third to win the points and the win.”

Added Eng Cheong: “To win our first game in the first round was important and it has given us a positive vibe. We will continue to play aggressively and to improve our fighting spirit for the next match.”

In the second round, Hang Yee-Eng Cheong will face the tournament’s fourth seed Marcus Ellis-Chris Langridge from England, who walked off with a 21-10, 21-12 win over Nigerian pair, Godwin Olofua-Anuoluwapo Juwon Opeyori.

“Our opponents in the round were not very strong but we are taking the cautious approach for every match,” said Aaron.

Yew Sin-Ee Yii will be up against Denmark’s Joel Eipe-Rasmus Kjær in the second round.

Another professional doubles, Goh V Shem-Tan Wee Kiong also made the cut to the next round after scoring a straight set 21-17, 21-11 win over Danish duo Daniel Lundgaard-Mathias Thyrri.

However, the same could not be said of Goh Sze Fei-Nur Izzuddin Rumsani when they were left stranded in the first round after losing to the tournament’s top sixth seed from Denmark, Kim Astrup-Anders Skaarup Rasmussen 22-20. 13-21, 13-21.

In the women’s doubles, Malaysian youngsters, Pearly Tan-M Thinaah advanced to the second round after defeating Serena Au Yeong-Katharina Hochmeir of Austria in straight set 21-17, 21-6.

Pearly-Thinaah will be up against Russian pair Anastasiia Akchurina-Olga Morozova who stunned sixth-seeded French pair of Emilie Lefel-Anne Tran 21-15, 23-25, 21-15.

Chow Mei Kuan-Lee Meng Yean also confirmed their place in the second round after defeating Jessica Hopton-Jenny Moore of England with a straight-set win 21-18, 21-13.

In the men’s singles, Lee Zii Jia picked up his first win when he defeated Sergey Sirant of Russia 21-12, 21-14 and where he will now be up against Denmark’s Viktor Svendsen in the second round.

But as luck would have it, Liew Daren and Song Joo Ven as well as the women’s singles Soniia Cheah, failed to get past the first round of the championship.