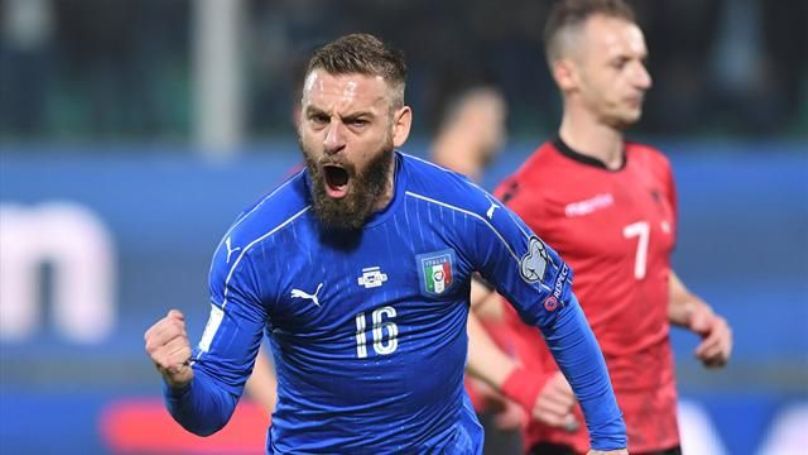 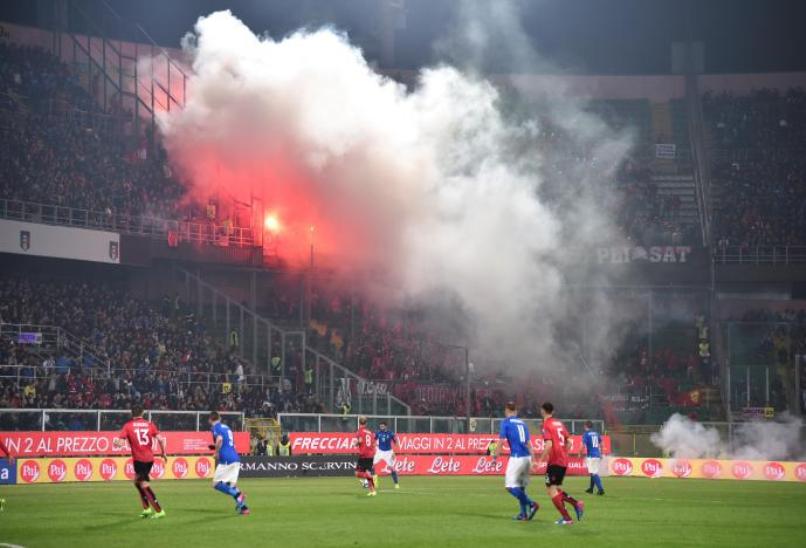 Lazio striker Ciro Immobile headed a superb second goal for Italy as the Azzurri maintained their 2018 World Cup qualifying bid with a controversial, interrupted 2-0 win over Albania on Friday.

After being held 1-1 by Spain in Turin last year, Italy face La Roja away on September 2 looking for the win that could seal automatic qualification as group winners.

“These three points are fundamental for us,” said Immobile, who started up front alongside Torino’s Andrea Belotti.

“We’re still in contention. It wasn’t an easy game by any means, but we managed to get the win.”

Albania coach Gianni De Biasi had warned the Renato Barbera stadium in Palermo would be heavily attended by fans keen to follow his side following their historic, major finals appearance at Euro 2016 last summer.

Referee Slavko Vincic suspended the match for several minutes in the second half due to the persistent throwing of flares and smoke bombs by Albania supporters.

“I saw something tonight I hadn’t seen in five years. I’m really sorry and disappointed.”

He added: “We were still in the game until the second goal, that’s the most positive thing for us.

“But Italy are a quality side, in great condition, and some of our players are not even playing in their clubs, so our performance was more than acceptable.”

Their qualifying hopes virtually non-existant, Albania nonetheless started promisingly and in the opening minute Gianluigi Buffon — playing his 1,000th professional match — had to be alert when Sokol Cikalleshi’s angled drive flashed wide from a great position inside the area.

But the visitors’ enthusiasm got the better of them minutes later when Azzurri striker Andrea Belotti — enjoying a wonderful season with Torino boosted by a league-leading 22 goals — was hauled down by midfielder Migjen Basha.

Roma captain Daniele De Rossi stepped up for the penalty and sent Lazio goalkeeper Thomas Strakosha the wrong way with a confident strike into the bottom left corner.

A second goal looked on when Belotti raced on to Marco Verratti’s smart ball behind the defence but his drive was virtually straight at Strakosha, who still did well to block it.

Roshi curled over the bar from just inside the box near the end of the first half and Italy resumed after the break in confident fashion, Verratti setting up Immobile for a drive that glanced off Arlind Ajeti’s arm to skew wide.

When Albanian fans began to throw flares and smoke bombs again in the 56th minute, Vincic halted the match for several seconds, to serve as a warning.

But a minute later, he walked off through the smog with the match ball and suspended the match for just over five minutes.

Italy resumed in positive fashion again and after Antonio Candreva threatened at the back post from Lorenzo Insigne’s delivery, Bonucci got his head to a corner to glance wide.

Albania finally buckled in the 72nd minute, although there was little the visitors could do when Immobile met Davide Zappacosta’s probing delivery from the right with a perfect header that beat club-mate Strakosha at his far post. – Agence France-Presse