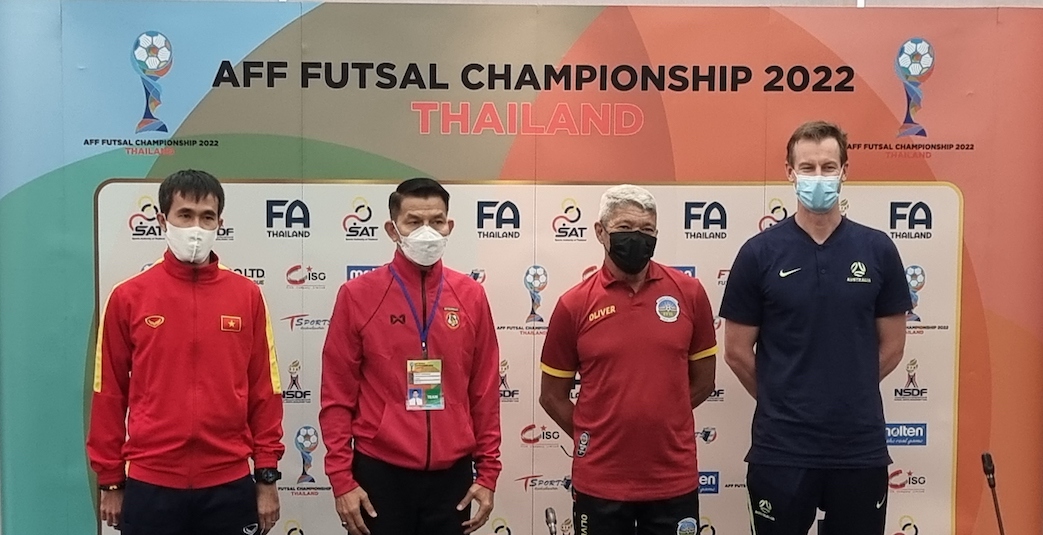 Vietnam are confident that they can win one of three tickets to Kuwait when they open their campaign in Group B of the AFF Futsal Championship 2022 tomorrow morning at the Indoor Stadium Huamark.

The Vietnamese, who made it to the Round of 16 at last year’s FIFA Futsal World Cup in Lithuania, have been hard at work over the last two months and where they will take on Myanmar in the opening group tie tomorrow.

“Yes, we had a long and good preparation for this tournament. And when we came to Bangkok last week, we also had three friendly matches. I believe that we can win one of three tickets to Kuwait (for the 2022 AFC Futsal Asian Cup),” said Vietnam head coach Pham Minh Giang.

For Myanmar, they will be relying on the experience of having played at the recent NSDF Futsal Invitation Championship in Bangkok to carry them through to the next round.

“I believe that we can be competitive here as the team gained valuable experience playing at the NSDF tournament. We have some young players coming through the ranks and they have shown to be invaluable to the squad,” added Myanmar head coach Bunlert Charoenwong

In the meantime, Australian head coach Miles Downie was pleased to be back to Futsal action after being missing for the last two years due to the pandemic.

“We are glad to be back for sure, where for this tournament we went around several states for training and to look for players. And when we arrived in Bangkok, we also played several friendlies so I believe that we are quite prepared,” said Downie.

For Timor Leste, they will be hoping that the two months of preparation will turn the key for them to get into the knockout stage of the competition.

“We had about two months of preparation with the players from the league. The only issue is that we were not able to play international friendlies. But I believe that the young players will be the key for us,” added Timor Leste head coach Jorge Da Silva.