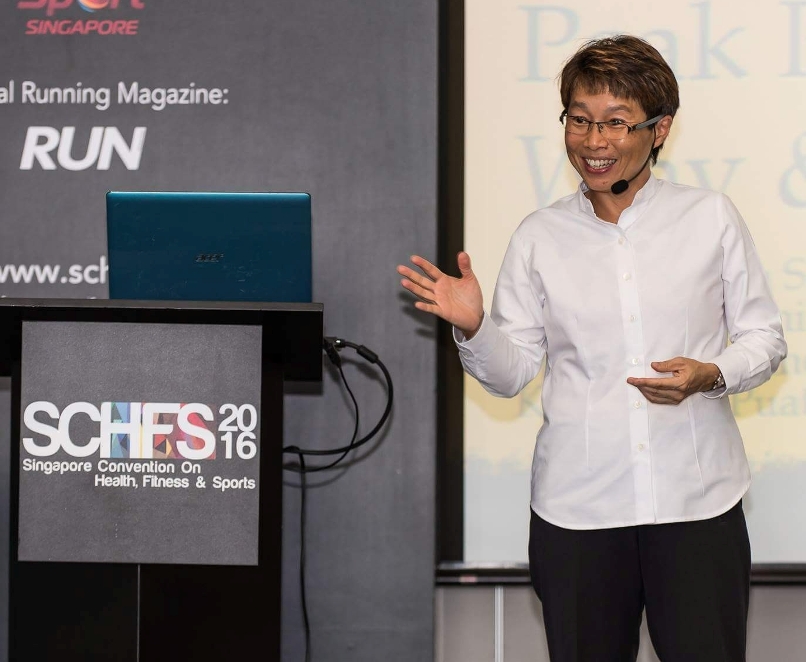 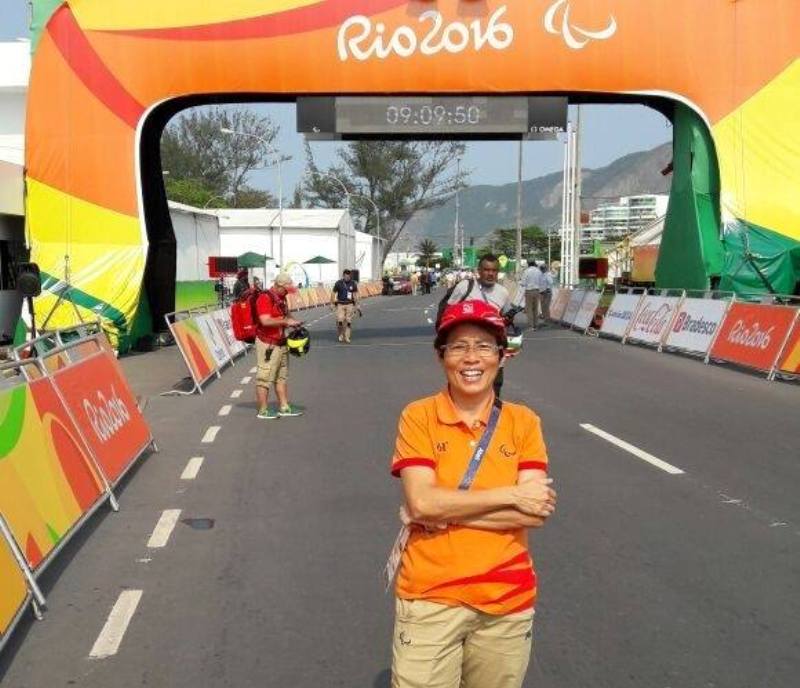 THANK you, dad. Thank you, dad!

Dr Teoh Chin Sim is very grateful that her father, an avid sportsman, played a major role in encouraging her to get a kick out of sports which have led her to be Singapore’s first female Sports Medicine specialist in Singapore.

“I was born in Singapore but raised in various parts of Malaysia for 10 years during my childhood as my late dad, Colonel Teoh Khong Guan, was in the Malaysian military,” she says.

“He was an absolute multi-sports enthusiast and played a major role in my involvement in sports. I participated in various sports at both competitive and recreational levels, including soccer, badminton, hockey, squash, track and field, and long distance running, just to name a few.”

Global research has shown that the most frequent turning point in father-daughter relationships is shared activity, especially in sports, ahead of such pivotal events as when a daughter marries or leaves home.

She knows she’s a perfect example of her sports-bonding with dad as he taught her to appreciate an active lifestyle. She says: “He was my biggest fan, always there to cheer from the sidelines, support my goals and achievements and help out at team functions. He was truly a positive role model.”

She recollects how as a young teenager, she had the good fortune to watch Malaysian football legends like Mokhtar Dahari, Soh Chin Aun and Santokh Singh train at a football pitch in Kuala Lumpur, Selangor, where she received sprint coaching on the track surrounding it. She adds: “Years later, a colleague who was a team doctor to Singapore’s national footballers in the Malaysia Cup suggested that I pursue sports medicine as my specialty.”

And the rest, as they say, is history as she went on to graduate with a Masters in Sports Medicine (Honours) from Alabama, United States of America, in 1994. For over two decades, she has been the attending team physician to Singapore’s elite athletes at major games. She was Chief Medical Officer for Team Singapore at the 1994 Commonwealth Games, 2006 Asian Games, 2012 Paralympic Games, 2014 Asean Para Games and 2014 Youth Olympic Games.

She also officiated as FIH (Federation of International Hockey) medical officer to the prestigious 1999 Champions Trophy and pre-Olympic qualifiers for Sydney 2000. Her most recent appointment was as Chief Medical Officer for Team Singapore at the 2015 SEA and Asean Para Games.

Dr Teoh is presently Director and Senior Consultant of the Sports Medicine Centre in Khoo Teck Puat Hospital. As a sports medicine specialist, her practice is focused on sports and exercise medicine. She works with competitive and recreational athletes and people who simply enjoy exercising. A qualified acupuncturist, she has a keen interest in the management of neuromusculoskeletal pain, and sports nutrition supplementation to optimise health and performance. 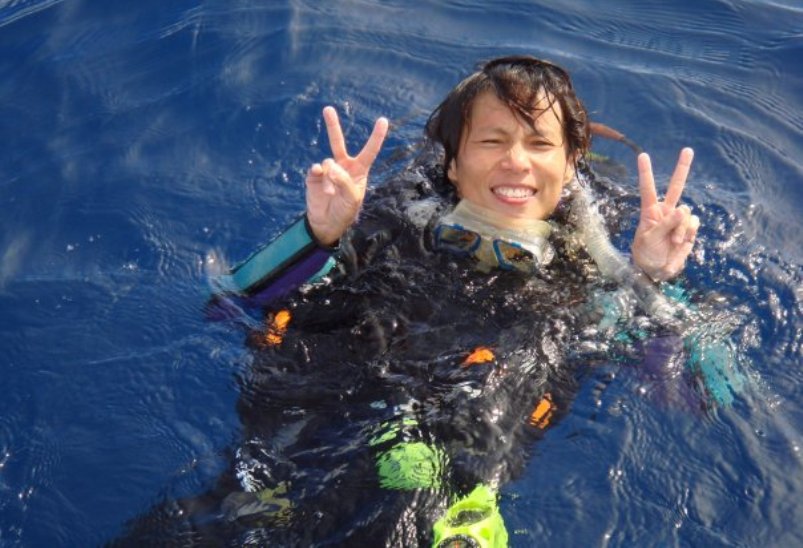 Now she’s set for higher football platform as she wants to bring a new sports-science perspective to the FAS (Football Association of Singapore) in contesting in “Team Game Changers” as a Vice President candidate, under Bill Ng.

She says: “I joined ‘Game Changers’ after due consideration because of two reasons.  People matter to me because I’m surrounded by people all day and I need to work with them as well as serve them and meet their needs. They are the reason why I exist.

“Firstly, Bill Ng and Annabel Pennefather in their approach to me came across as people who are genuine, sincere and serious about wanting to improve Singapore football. They also listen intently, with respect and humility. These qualities are important in the leaders with whom I work and serve.

“Secondly, because of what I think I could contribute to the GC Team in its effort to improve Singapore football in the areas of enhanced access of footballers to quality medical care, optimising soccer performance through sports science and raising sports safety standards.”

Football is about teamwork and Dr Teoh is the perfect example of alliance and association in sports. She adds: “In my own ways in the past and present, I’ve worked hard to assist, acting as a bridge sometimes, or helping them directly. Being a ‘team person’ often needing to coordinate, persuade and get the buy-in stakeholders and colleagues, I hope to bring together people to work in a synergistic manner to better serve our football community.”

Dr Teoh is currently the Chairman of the Therapeutic Use Exemption Committee of Anti-Doping Singapore, a member of The Republic Polytechnic Institutional Review Board and Medical Commission of the Singapore National Olympic Council, former Secretary of Medical Committee of the International Hockey Federation (FIH) and Past President of Sports Medicine Association of Singapore.

In the international arena, too, she creates big sparks. Dr Teoh contributes significantly as a member of both Anti-Doping Committee of the International Paralympic Committee and Therapeutic Use Exemption Expert Group of the World Anti-Doping Agency. Her most recent work took her to the Rio Paralympics 2016.

In her past time, Dr Teoh volunteers in a sports playgroup for special children, runs to keep fit and scuba dives for leisure, slowing down from her competitive days in track and field, squash and the marathon.

She even provided medical coverage during the heady days of the Malaysia Cup, as well as at S-League matches later on. She was also Singapore’s chief medical officer at the 2015 South-east Asia Games.

“While I have no direct experience managing an NSA, I believe that being in touch with the ground is very important as a starting point. And this is where I hope to begin, given the opportunity,” she said, pointing to her interactions with a broad spectrum of the football fraternity from club management individuals to medical staff, players and parents from both men’s and women’s teams.

Bill Ng, a merger and acquisition specialist and Chairman of Hugang United, welcomes Dr Teoh and Annabel Pennefather, the other woman Vice President-candidate. He believes that there is women-synergy in his team, one that can take football to a higher level – with expertise from beyond the sport.

“Change from within is sometimes too slow and eventually this is a common cause for downfall of modern companies, corporations and big giants,” says Ng. “This may be unorthodox, but we believe in bringing fresh perspectives, hearts, and minds, like Annabel and Dr Teoh, to the team.

“With both of them taking positions in the team, I’m sure that they can contribute to Singapore football in an electrifying way. We, the Game Changers, recognise that a quick fix is not the solution here, and we had to think outside the box to look for the best qualified candidates.” biggest dream for Singapore football. 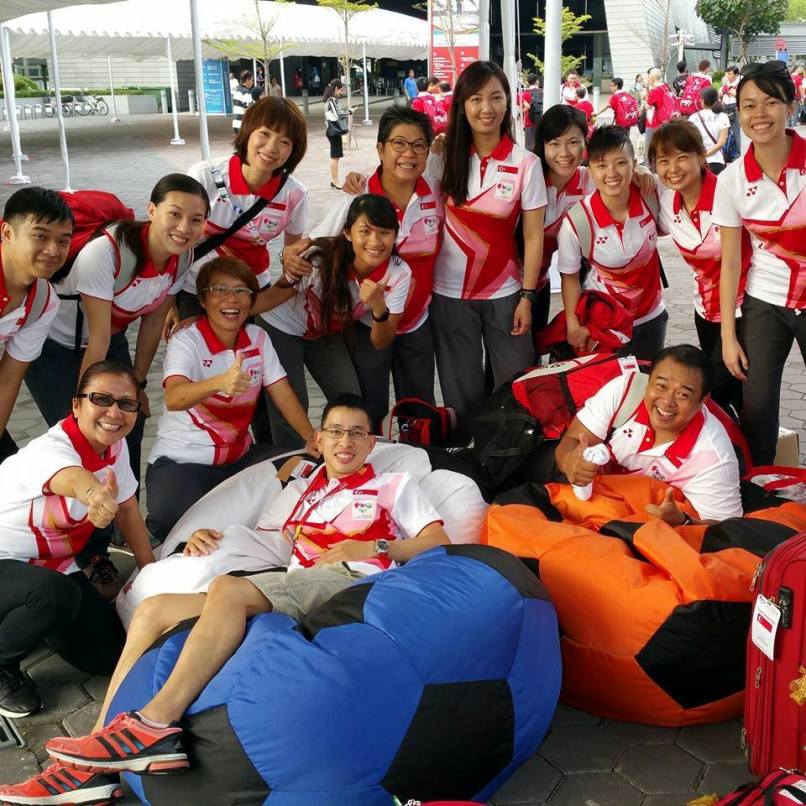 Dr Teoh’s biggest dream for Singapore football: “We must work hard to have a pipeline in place to consistently place Team SG men in the top 100 in the world, the women to win a gold medal at the SEA Games and never ever stop the work towards a thriving group of special children and youths playing para football.”

But her bottom line goes back to preach the importance of football-bonding and in building team relationships and to have a better appreciation of medical science in the “bola” game.

And whenever she sits back and relax, none other than lovable thoughts of her late dad come to mind. Tears well in her eyes as she recollects how he taught her to appreciate an active lifestyle.

“I say it again and again, he was my biggest fan. He was always there to cheer from the sidelines, support my goals and achievements and help out at team functions. He was truly a positive role model,” says Dr Teoh.