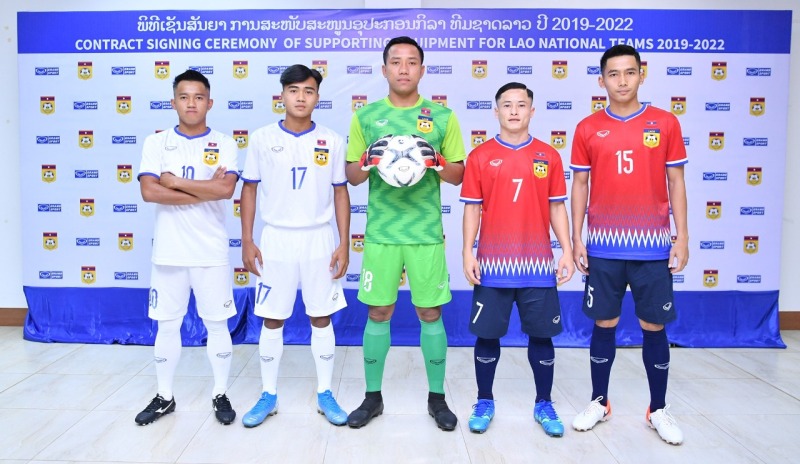 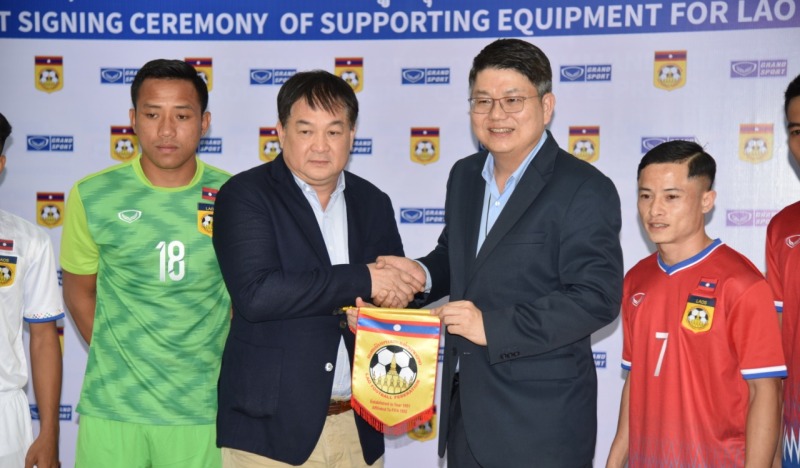 Grand Sport, a leader in sports equipment in ASEAN, has signed on to sponsor the Lao Football Federation (LFF) for four years.

The deal will see Grand Sport design, manufacture competition, training, travel uniforms and soccer balls for athletes and team officials from 2019 to 2020.

Grand Sport has also launched the newly designed Laos national football team jersey that will be worn by for the 2019 SEA Games in the Philippines next week.

“The LFF would like to thank Grand Sport for supporting the Federation for four years. The Grand Sport brand is recognized internationally with products that are outstanding in both design and quality” said Viphet Sihachakr, President of LFF.

The federation has teamed up with Grand Sport to design and develop the new Laos national football team’s uniform with a unique design combined with quality standards true to the brand.

Thara Pluckcha-oom, Vice President of the Grand Sport Group, said that the company is pleased and honored that “Grand Sport” is trusted by the Lao Football Federation (LFF) to be the official main sponsor.

He said that Grand Sport is also looking forward to supporting Laos in developing products that will help increase the performance of local athletes.

“The new Lao national football team’s uniform for 2020 is inspired by the traditional woven pattern which is part of the cultural identity of the Lao people while giving it some modern attributes,” added Thara.

“Outstanding with blue, white and red shades on the sleeves, collar and left chest, embroidered Laos flag and Laos national team crest, the right side is embroidered with a Grand Sport logo. The lightweight fabric also allows the absorption of moisture to improve performance. The competition costume is in two colors, white and red. The colors of the uniform are drawn from the national flag and represent the unity of the Lao People.”

The new jersey of the Laos national football team will be worn at the 2019 SEA Games in the Philippines, between November 30 and December 11.

It is the first project by Grand Sport Group Co., Ltd. as an official sponsor of the LFF for which it has obtained exclusive rights.