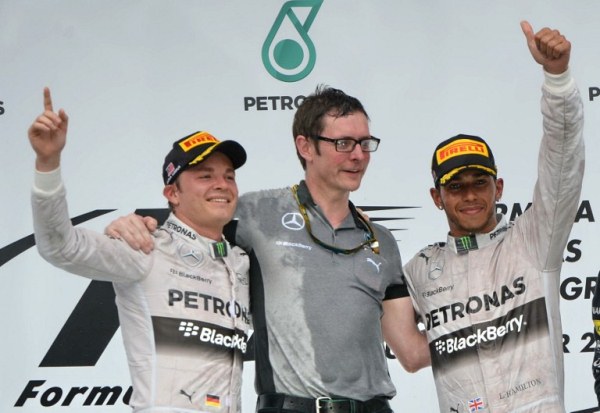 BRITAIN’S Lewis Hamilton led the first Mercedes one-two in 59 years on Sunday as he stormed into the title race with a commanding victory at the Malaysian Grand Prix.

Hamilton streaked away from pole position and was never pressured as he finished ahead of teammate Nico Rosberg with four-time defending world champion Sebastian Vettel third for Red Bull.

It was the first time both Mercedes drivers have led the field since 1955, when the German marque departed the sport before returning in 2010 and now confirming themselves as the team to beat in F1’s new era.

The win was sweet for Hamilton, who ended an eight-month win drought since Hungary last July and who was frustrated at the season-opener in Australia when he had to retire early.

Rain disrupted qualifying, but Malaysia’s notorious downpours were largely absent as the 2008 world champion finished 17 seconds ahead of Rosberg, who leads the overall standings with 43 points to Hamilton’s 25.

Afterwards, Hamilton paid tribute to the victims of the mysterious MH370 plane disappearance, which cast a shadow over the race and was blamed for poor ticket sales with the Sepang circuit only about half-full.

“Incredible, incredible,” Hamilton said of the win. “I just feel so grateful particularly after such a tragedy three weeks ago. I would like to dedicate it to those people and their families.”

After a sombre minute’s silence for the MH370 missing, Hamilton got away smoothly from pole as his teammate Rosberg squeezed inside Vettel and into second position on the starting straight.