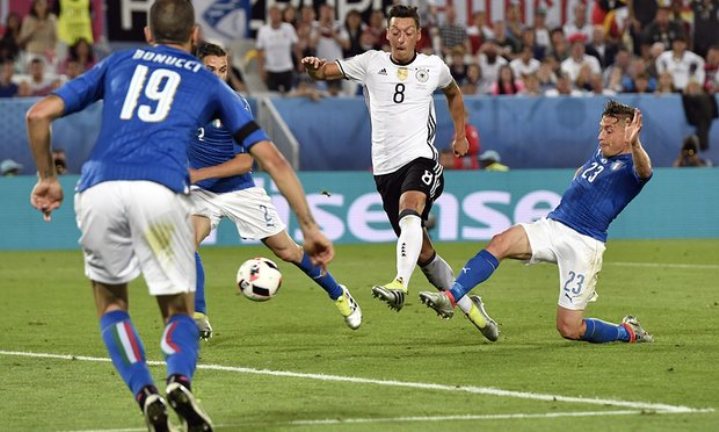 Jonas Hector fired Germany into the Euro 2016 semi-finals at Italy’s expense after an epic round of 18 penalty kicks that saw players from both sides produce stunning misses in Bordeaux on Saturday.

World Cup holders Germany won the shoot-out 6-5 after a tense match finished 1-1 at the end of 90 minutes and extra time, beating old foes Italy at a major tournament for the first time in nine attempts.

Their reward is a semi-final with the winner of Sunday’s last quarter-final between hosts France and Iceland.

Joachim Loew’s side had appeared to be heading for the win after Mesut Ozil gave them a 65th-minute lead, but Italy equalised through a Leonardo Bonucci penalty 12 minutes from the end of normal time after a Jerome Boateng handball.

With no goals in extra time, Ozil, Thomas Mueller and Bastian Schweinsteiger all failed from the spot for Germany, usually so reliable from 12 yards.

But after Simone Zaza and Graziano Pelle missed for Italy and Bonucci was denied by Manuel Neuer, Matteo Darmian’s failure to convert the Azzurri’s ninth kick allowed Hector to become Germany’s hero.

“It’s hard to put it into words, but I am overjoyed that it went in,” said Hector.

“There weren’t many people left. I knew I had to take one at some point and I had my heart in my mouth. We’re happy to have gone a round further, it was really stressful and of course luck played it’s part.”

Italy’s campaign had shown promise with wins against Belgium and over Spain in the last 16, and coach Antonio Conte said: “I’m very proud of what the team achieved here.

“The only regret is the penalty kicks. But for commitment to the shirt, I can’t fault them.”

The game had been billed as the pick of the quarter-finals, but large spells of the game in Bordeaux were uneventful.

Germany talisman Schweinsteiger again started on the bench but was introduced after quarter of an hour to replace Sami Khedira, who came off with a groin injury.

Schweinsteiger found the net just before the half-hour mark but his effort was disallowed for a foul on Mattia De Sciglio.

Loew had sprung a surprise by moving away from his usual 4-2-3-1 formation in favour of a 3-5-2 to replicate the Italian set-up, dropping the previously excellent Julian Draxler as a result.

Germany went on to dominate possession but Gianluigi Buffon was untroubled by a Mario Gomez toe-poke while the veteran goalkeeper also easily saved from a Mueller shot late in the first half.

Italy responded in kind, Emanuele Giaccherini seeing his cutback go all the way to Stefano Sturaro, whose low drive had power but was deflected behind for a corner.

Germany moved up a gear immediately after the restart, Gomez smartly laying the ball off for Mueller to hit a left-foot drive that was turned behind by the backtracking Alessandro Florenzi.

The opener arrived soon after as Gomez pounced on some slack defending by Florenzi before finding Hector in space to the left of the penalty box.

The full-back’s attempted cutback came off Bonucci but fell to Ozil, who fired past Buffon from close range to give Germany the lead.

They could have gone further ahead when Ozil found Gomez in space with a great chip, but the striker’s outrageous flick from close in was superbly saved by Buffon and the offside flag came up anyway.

Italy looked down, but they were not out.

An unmarked Pelle got his left foot to Florenzi’s low cross but fired off target, and minutes later the Azzurri pulled level after the ball came off the arm of Boateng in the area.

Hungarian referee Victor Kassai immediately pointed to the spot and Bonucci stepped up to beat Neuer low to the goalkeeper’s left to spark wild celebrations.

It was the first goal Neuer had conceded at the tournament after four successive clean sheets.

There was a minor scare for the Germans with three minutes left when Eder found De Sciglio on the left and the AC Milan midfielder saw his powerful drive ripple the side-netting.

Into extra time they went and Germany came closest in the additional half hour, substitute Draxler pouncing on a poor headed clearance from Andrea Barzagli to send an overhead kick just over, before both sides settled for penalties and the drama that ensued. – Agence France-Presse