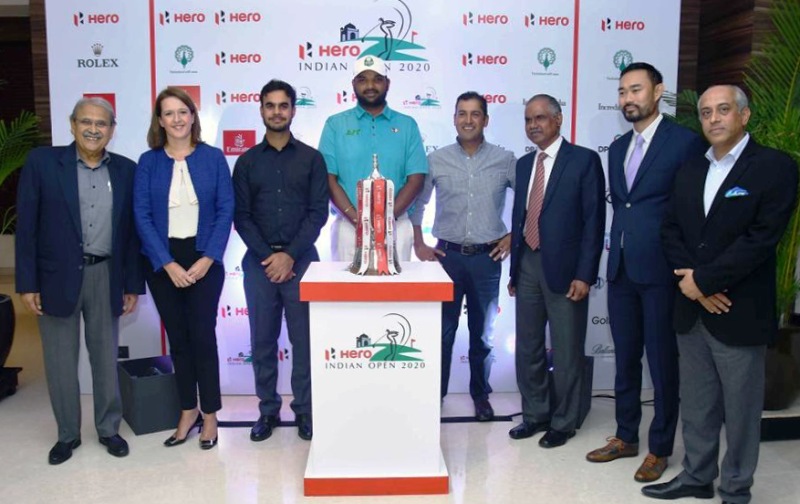 The 2020 edition of the Hero Indian Open is set to return to the DLF Golf and Country Club in Gurgaon from March 19-22.

Highly regard as India’s flagship golf tournament and the country’s longest running international sports event, the 56th edition of the Hero Indian Open will also be the 15th consecutive year that Hero MotoCorp Ltd, the world’s largest two-wheeler manufacturer and one of the biggest corporate promoters of sports around the world, is supporting the tournament.

Inaugurated in 1964, the US$1.75 million Hero Indian Open is expected to welcome several of the best players in the world as it is once again promoted by the Indian Golf Union (IGU) and co-sanctioned by the Asian Tour and European Tour.

The challenging Gary Player Course at DLF Golf and Country Club, which has been the host venue of the Hero Indian Open since 2017, will provide a stern test for the 144 players vying for top honours next month.

Proven and established champions including Shiv Kapur, Rashid Khan, Rahil Gangjee and Shubhankar Sharma will also be in the fray.

Scotland’s Stephen Gallacher won his first professional title in Asia and his third on the European Tour when he triumphed in Delhi in 2019. The former Ryder Cup player staged a remarkable comeback by firing three birdies in his closing four holes to win the Hero Indian Open by one-shot over Japan’s Masahiro Kawamura.

Bharatendu Kabi, Head, Corporate Communication, Hero MotoCorp said: “Hero MotoCorp remains committed to the long-term promotion of golf in the country and around the world. We have been the Title Sponsor of the Hero Indian Open for 15 consecutive years now.

Lt.Gen D.Anbu (Retd), President, Indian Golf Union said, “I am very pleased to be attending my 2nd Hero Indian Open in the capacity of President of the IGU, the Promoter of the event. That we have come through trying times to host this, the most spectacular golf tournament in all of India, is a matter of immense pride.”

“Hero MotoCorp has been a steadfast partner of the IGU and we are deeply grateful for Dr. Pawan Munjal’s friendship and patronage. The DLF Golf and Country Club is a true test of golf and particularly on this course, all gofers need the time tested formula of hitting straight, aiming correctly and putting well, to be the Indian Open Champion of the year.

“My gratitude to my colleagues in the IGU for their silent but efficient work in putting this together. While I do hope the trophy stays at home, my best wishes to all participants.”

Cho Minn Thant, Commissioner and CEO, Asian Tour said: “The Hero Indian Open has always been regarded as one of the Asian Tour’s Majors. This historic event has long boasted a stellar field and I would like to extend our fullest appreciation to Hero MotoCorp and the Indian Golf Union for their support in continuously raising its stature over the years.

“It is also therefore befitting for the Hero Indian Open to be staged at the very challenging DLF Golf and Country Club. It is a course which demands immense mental strength as anything can happen at any time and no lead is too big.

“The final stretch at the DLF Golf and Country Club is one of the most demanding in professional golf but I have every confidence of a solid showing by our players this year as  we have many dual members who have the experience of competing more often on the European Tour now. We also expect a strong showing from the local players who have the advantage of home ground knowledge.”

Ben Cowen, Deputy Chief Operating Officer – International, European Tour said: “We look forward to returning to the striking surroundings of DLF Golf and Country Club in March as the Hero Indian Open takes its place on the Race to Dubai for the sixth year.

“As ever we thank title sponsors Hero MotoCorp for their continued support, and in particular their Chairman, Dr Pawan Munjal, whose commitment and vision helps to drive a wide range of projects across the European Tour, ranging from this event to the innovative and ever-growing Hero Challenge.

“We also acknowledge the Indian Golf Union’s hard work in continuing to grow and develop the game across India, and once again look forward to working alongside our colleagues at the Asian Tour to co-sanction another exciting event.”