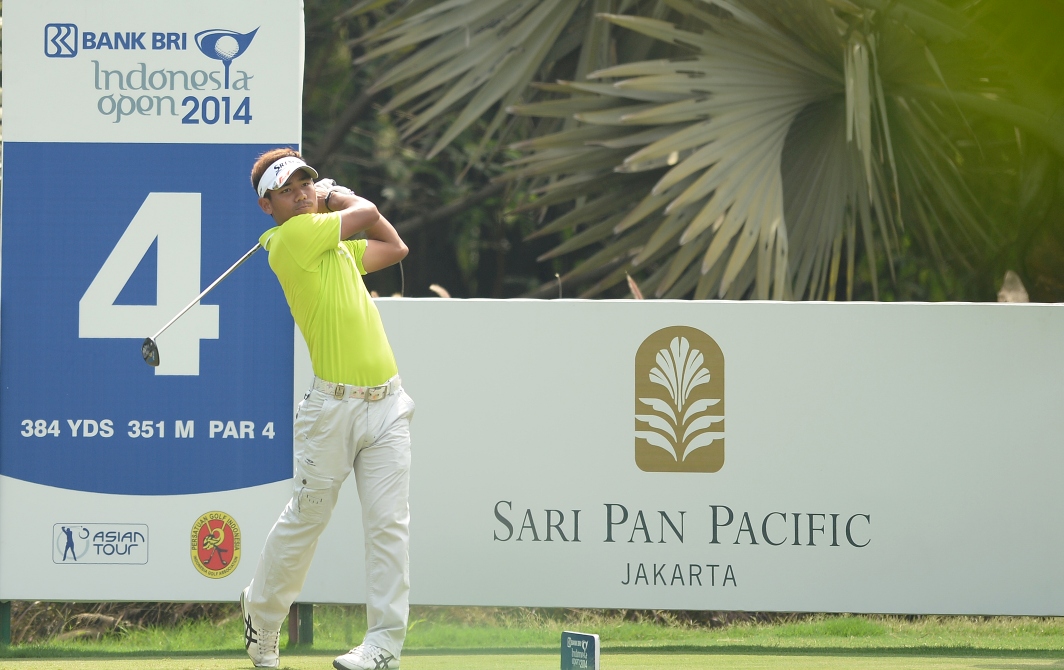 In-form Thanyakon Khrongpha of Thailand fired a superb eight-under-par 63 to seize the clubhouse lead as Padraig Harrington’s charge was stopped by bad weather at the BANK BRI Indonesia Open on Friday.

The slightly-built Thai produced a near perfect card in the calm morning conditions which included nine birdies before stumbling to a lone bogey on his last hole to settle for a 12-under-par 130 total at the Damai Indah Golf, PIK Course.

Multiple Major winner Harrington negotiated his way in 12-under through 12 holes before the US$750,000 halfway stage was called off for the day due to inclement weather. The Irishman and 66 other players will resume play at 6.30am on Saturday.

Among the players who finished their rounds include Asian Tour rookie Nathan Holman of Australia, who was two shots back after matching Thanyakon’s efforts of 63, while Scott Hend and Jarin Todd of the United States shot identical 64s for a 133 total.

The slightly built Thanyakon continued his rich vein of form after securing two top-five results in Japan and Chiangmai in the last three weeks. He is beginning to reap the rewards of working with his coach Andrew Knott since 2013.

“Everything in my game was good especially my ball striking. I hit a lot of shots for close range birdies. The longest birdie of the day was on the seventh hole from 30 feet,” said the 24-year-old Thanyakon.

“I enjoyed a good run after turning professional in 2010 but after that I didn’t do too well because I had no confidence in my swing. Mentally I was not strong enough. Then last year, I worked with Andrew and I’ve really improved since then,” he explained.

Harrington, a three-time Major winner, was five-under at the turn courtesy of an opening eagle which he holed from 15 feet. He marked his card with another bogey and birdie before play was abandoned.

“I had a nice start. I hit a nice drive and a five iron to about 15 feet for eagle. I birdied the next two as well. It was nice to be four-under after three holes. I didn’t play quite solid after that but we’ll have to see if I can finish strongly tomorrow,” said Harrington.

“The course is playing nicely. There was a bit of wind in the afternoon which made it trickier. As I play more rounds I get to know the course a little better. I have an early wake-up call tomorrow so hopefully I can continue to do well,” he explained.

Tour rookie Holman took advantage of the ideal scoring conditions without shooting a single bogey. Currently ranked 95th on the Order of Merit, the Australian is spurred on by the thought of saving his card for next year.

“I’m looking to play on the Asian Tour until the end of the year and try to keep my card. Keeping my card is definitely on my mind and it is spurring me on a little bit. Anytime you shoot in the low 60s when you got something on the line is always good,” said Holman.

Big-hitting Hend, who won his first Asian Tour title on this course in 2008, eagled the 13th hole from eight feet to charge into contention.

“I had some loose shots coming in and I’m a bit lucky to make some par putts and saves. I hit it good on the first nine and not so good on the back so it even out. Now I’m in a nice position,” said Hend, a six-time Asian Tour winner.