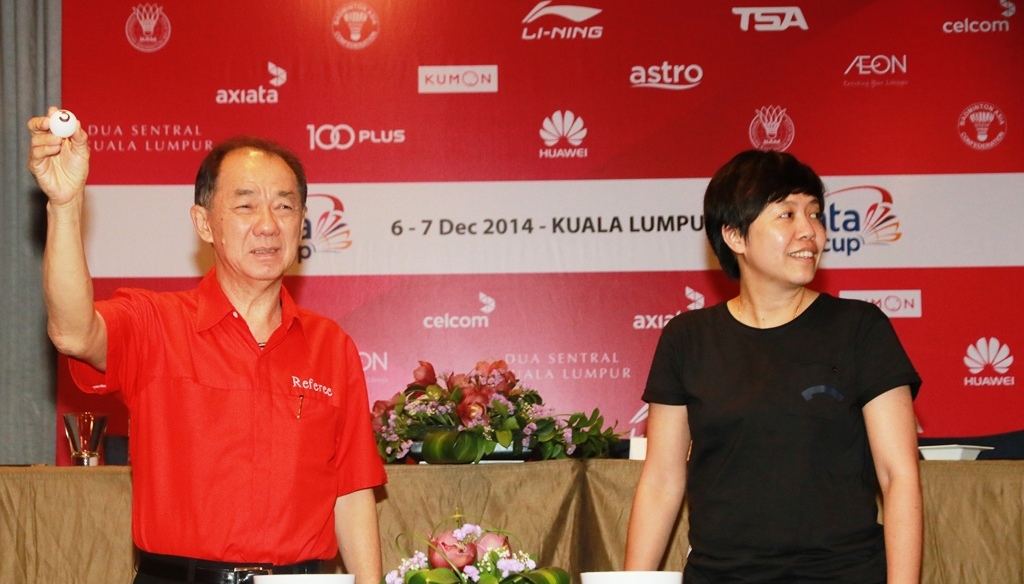 * Rashid Sidek and Jeremy Gan take over as coaches for semis

DEFENDING champions Malaysia were drawn to meet favourites Indonesia while last year’s runners-up Thailand will take on Asia All Star in the 3rd edition of the USD1 million Axiata Cup badminton team championships at the Kuala Lumpur Badminton Stadium (KLBA) in Cheras tomorrow.

However, Indonesia coach-manager Aryono Minarat was quick to shoot down his team’s title favourites tag after immediately after the draw which was conducted at a leading hotel in Kuala Lumpur on Friday evening. Indonesia have arrived in Kuala Lumpur with a very much weakened team without some of their aces. Missing are men’s singles stars Simon Santoso and Dionysius Hayom Rumbaka and world No 4 mixed doubles pair Tontowi Ahmad-Liliyana Natsir.

Aryono revealed that Santoso is getting married tomorrow (Saturday), while Rumbaka is competing in the Indonesian national championships and has not been released by his club while Tontowi-Liliyana are in Bangkok to play exhibition matches. Indonesia had earlier lost their woman’s singles player Lindaweni Fanetri through a hamstring injury while playing against Europe All Star’s Kirsty Gilmour on Tuesday..

“We have a much weaker team in KL. Some of the big names who helped the team finish on the top of the table in the round robin league in Jakarta are not here and this could play a deciding factor although we have not lost sight of winning the title,” said Aryono, adding that both teams have a 50-50 chance on match day.

“You must also remember the home fans and home venue played a part in what we achieved in Jakarta. It could be a deciding factor for Malaysia too. It does not mean we can beat Malaysia 4-0 again in KL. There are many plus factors for Malaysia and we will have to take note of that. I will only decide on my team after the team briefing later tonight.”

Nevertheless, Aryono is pinning his hopes on Tommy Sugiarto to deliver in the men’s singles for the morale boosting point. Tommy (world No 5), son of former world champion Icuk Sugiarto joined the team on December 1 after competing in the Hong Kong and Macau Open and played against the Philippines and Singapore – winning both his matches.

Meanwhile, Rashid Sidek, who took over the job of coach-manager from Pang Cheh Chang, said: “Of course we wanted to avoid playing Indonesia in the semi-finals but the luck of the draw has pitted us against the favourites. We have no choice but face them . As the defending champions we want to defend the title.

“Our hopes are as good as Indonesia’s. I was not with the team in Jakarta because I was away for the Hong Kong and Macau Open. However, I kept of Malaysia’s progress. The players have shown guts and determination to be still in the running. This is enough motivation for us to do well in front of our home fans.”

Rashid has not decided on his team lineup yet and will take into account the players’ mental and physical strength in deciding on the team.

Thailand coach-manager Udom Luangphetcharaporn is taking a very cautious stand against the Asian team made up of players from Hong Kong, Taiwan and India, especially after Asia beat Thailand 3-1 in Jakarta.

“We are in the semifinals but it has been a struggle of sorts. Asia has a good lineup and well balanced in all events. It depends who wins the first point as it can sway the team’s fortunes,” said Udom.