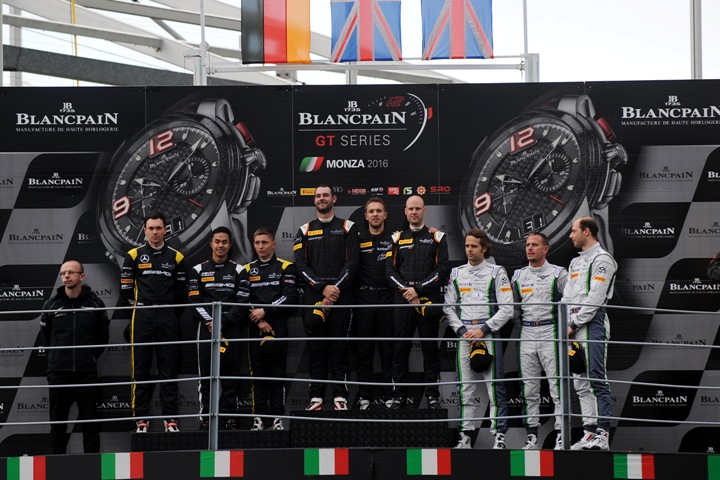 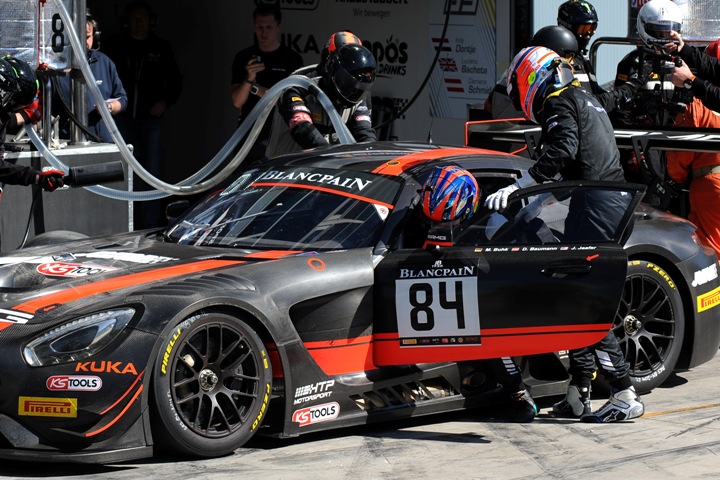 Leading Malaysian racing driver, Jazeman Jaafar, stood on the podium at Monza circuit in Italy today, with a second place finish in his first Blancpain Endurance Series race after a closely fought battle throughout the three hours of racing.
The 23-year-old driver became the first Malaysian, and the first Asian driver, to stand on the Blancpain Endurance Series podium, a great effort from the talented driver.
Joining HTP Motorsport for this season, Jazeman was driving the team’s #84 AMG Mercedes GT3 sportscar, with team mates Maxi Buhk and Dominik Baumann.  Jazeman had a dream start to his Endurance racing season with the team putting the car on pole for yesterday’s race and then bringing it home in second place, just 0.341 seconds behind the winners.
The weekend began with a short free practice session on Saturday morning, with the team working on set up preparations for the qualifying session, finishing this with 10th fastest time in the Pro Cup class, and with 20 cars within a second, proving just how competitive this championship is.  In the pre-qualifying session in the afternoon, the team continued with their set up development, improving to fifth fastest in class, with the top 24 cars within a second.
The three qualifying sessions were held on Sunday morning, with Dominik posting fourth-fastest lap in class, fourth overall in the first segment. In qualifying 2 it was Jazeman behind the wheel and, as the track temperatures increased, lap times dropped, with Jazeman putting the car third quickest.
Maxi took over the driving duties for the final qualifying period and he put in a blistering lap to grab pole for the race, with 31 cars within the same second and nine different manufacturer brands on the first nine rows, such a competitive field.
Dominik took the start for the race, with a field of 56 cars behind him on the Monza circuit, an enormous grid for the opening round of the Blancpain Endurance Series. He held first place in class throughout his stint, with Jazeman taking over from Dominik for the second stint of the race.
A pit limiter issue for the young Malaysian delayed his return to the track, and after a short stall, he emerged from the pits in second place. He maintained his position throughout his time on track, pitting from second to hand over to Blancpain Sprint Series 2014 champion, Maxi.
Maxi was able to close the gap on the leader as the race reached the final stages and despite a number of passing attempts, was unable to find his way past the McLaren in the lead, but hounded it to the chequered flag, finishing just 0.341 seconds behind the winners after three hours of racing.
Jazeman said after the race, “What a debut Endurance Series race for me. I didn’t expect to be holding a trophy in my first race, but it’s such a great team, with two very good teammates, that I’m learning from and really enjoying using their experience. I’m disappointed that I lost time in the pitlane, but when I switched off the pit limiter the car stalled, so I had to restart it. Out on track I kept getting so much traffic, it was a real learning curve driving in such a large field of cars, but I’m very happy to have maintained track position and to be able to contribute to a very close finish and a fantastic start to the Endurance cup season.”
Jazeman returns to the race track in two weeks time, with the second round of the Blancpain Sprint Series, which takes place in Brands Hatch, UK.