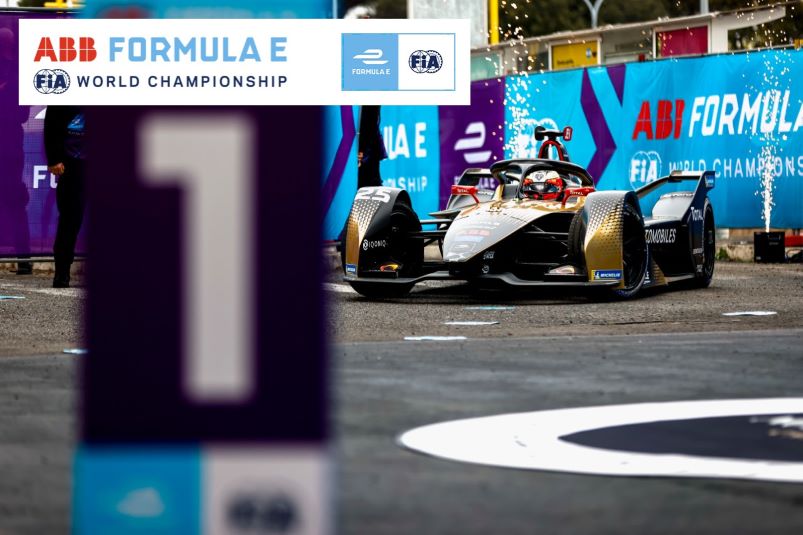 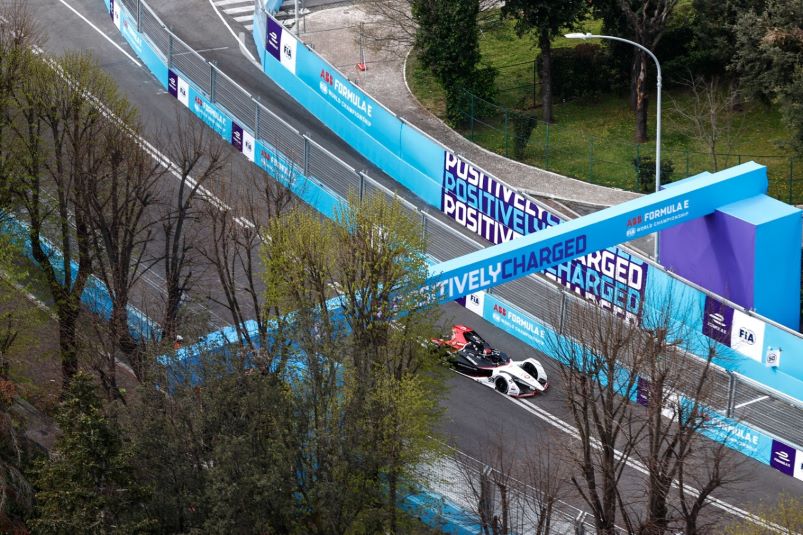 DS TECHEETAH’s Jean-Éric Vergne took the 10th win of his Formula E career around the Circuito Cittadino dell’EUR, followed closely behind by Jaguar Racing duo of Sam Bird and Mitch Evans.
Jaguar Racing achieved their first double podium in Formula E, with the British squad being led to the chequered flag by Bird, who started the race in 10th and Evans in 12th.
The MINI Electric Pacesetter led the cars off the start line due to mixed conditions on track. Once the pack was released it wasn’t long before Julius Baer Pole Position winner Stoffel Vandoorne (Mercedes-EQ) and André Lotterer (TAG Heuer Porsche Formula E Team) tangled, leaving them both out of contention.
Vergne and Lucas di Grassi (Audi Sport ABT Schaeffler) enjoyed a game of cat and mouse with the pair continuing to swap positions through Attack Mode activations. On Lap 21, the Brazilian slowed with a technical issue, leaving Stoffel Vandoorne (Mercedes-EQ) to take evasive action and spin into the barriers.
The Safety Car was deployed and brought the cars across the finish-line, with the podium finishers followed by Robin Frijns (Envision Virgin Racing), Sébastien Buemi (Nissan e.dams), René Rast (Audi Sport ABT Schaeffler), Pascal Wehrlein (TAG Heuer Porsche Formula E Team), Alex Lynn (Mahindra Racing), Maximilian Günther (BMW i Andretti Motorsport) and Nick Cassidy (Envision Virgin Racing).

“Today was the first race weekend with the new powertrain and it felt really good. The team did a great job to fix the car in time for the race after FP1. My engineer was very good in giving me directions on energy management and Attack Mode. I had very good management during the race and it was a question of making of the most of the energy reduction. When Lucas tried to overtake me I didn’t stop him because I knew we had more energy and there was a long way to go. I knew that I could’ve taken him.”

“We had a really good start as a team with another podium finish. I won here before, but I can’t compare the two tracks. The circuit was very difficult, but I am really pleased with the performance. It felt really comfortable and we didn’t waste too much time in overtaking. JEV defended very well and I’m happy with the result.”

“This is our first double podium as a team – congratulations to everyone involved and Sam, we work really well together. It wasn’t an easy race to manage at all. The conditions weren’t easy and starting in the middle of the pack, you can easily get caught up in crashes. I’m glad we started under the safety car as T1 could’ve been tricky, but our pace was extremely strong.”