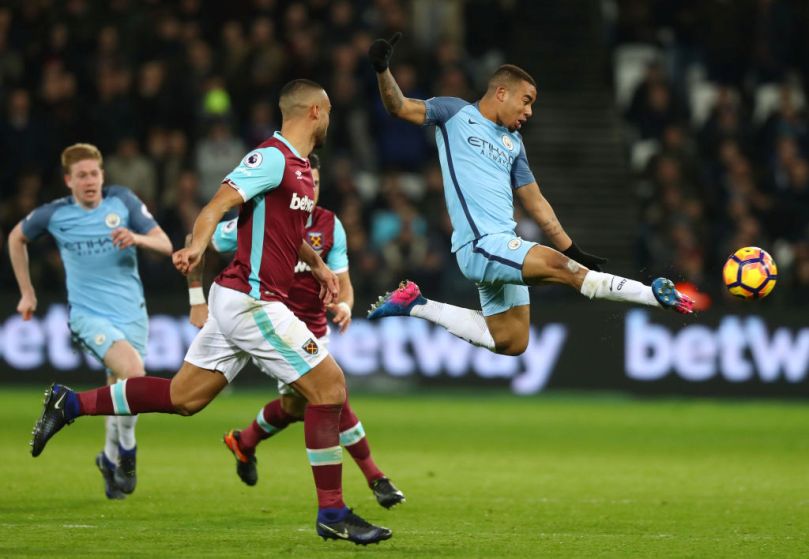 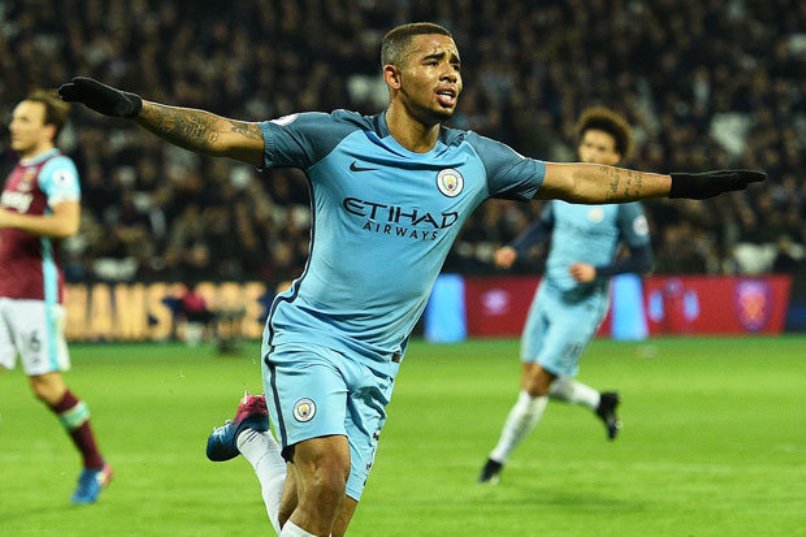 Gabriel Jesus opened his Manchester City account in a 4-0 stroll at West Ham United on Wednesday that sent his side level with fourth-place Liverpool in the Premier League.

Pep Guardiola’s team took full advantage of slip-ups by the other teams in the leading pack on Tuesday to move level on points with Liverpool, 10 points below leaders Chelsea.

“Gabriel Jesus is a fighter with an instinct for the goal,” beamed Guardiola of his £27 million ($33.6 million, 31.3 million euros) recruit from Palmeiras. “He’s good at assists too.”

Manchester United could not follow suit, however, a damaging 0-0 draw at home to struggling Hull City leaving Jose Mourinho’s men four points below Liverpool and City in sixth place.

Just a point now separates the teams sitting second, third, fourth and fifth, with Tottenham Hotspur and Arsenal level on 47 points, a point above Liverpool and City.

And it worked as the visitors streaked into a 3-0 lead inside 39 minutes through goals by Kevin De Bruyne, David Silva and 19-year-old Brazil starlet Jesus.

De Bruyne opened the scoring in the 17th minute, picking up a loose ball and exchanging passes with Jesus before sweeping a first-time shot into the bottom-right corner.

Jesus then opened his account with a delightfully constructed goal, slotting in after Sane’s through ball had been steered across goal by Raheem Sterling.

But three minutes later Yaya Toure made it 4-0 from the penalty spot after Sterling was clumsily fouled by Fonte, sealing a second convincing win for City at West Ham after last month’s 5-0 FA Cup romp.

“We played a front three with an average age of 20. I like the fans to be excited,” Guardiola told BT Sport.

“Those players are the future of the club. They will be important players for the next few years.”

Mourinho made nine changes to the United team that had crushed Wigan Athletic 4-0 in the FA Cup on Sunday, but Hull goalkeeper Eldin Jakupovic repelled everything the hosts threw his way.

He saved spectacularly from Zlatan Ibrahimovic and Paul Pogba in the first half and produced a stunning goal-line block to deny substitute Juan Mata what seemed a certain goal in the second half.

United continue to press, but Hull new boy Lazar Markovic almost completed a smash-and-grab win in the 86th minute, the on-loan Liverpool winger seeing his shot come back off the post.

“We didn’t score. You don’t score, it is not possible to win. Their goalkeeper was good,” Mourinho said in a terse post-match interview.

“They had the feedback and were comfortable to do what they did. I am not critical of that. They are fighting against relegation and every point is gold.”

The point took Hull off the foot of the table, but Marco Silva’s much improved side are still four points from safety.

“We played like a team with a great attitude, spirit and character.”

Everton remain seventh, nine points below the Champions League places, after a 1-1 draw at Stoke City.

Peter Crouch gave Stoke an early lead with his 100th Premier League goal, but Ryan Shawcross turned Seamus Coleman’s cross into his own net in the 39th minute to give the visitors a point. – Agence France-Presse