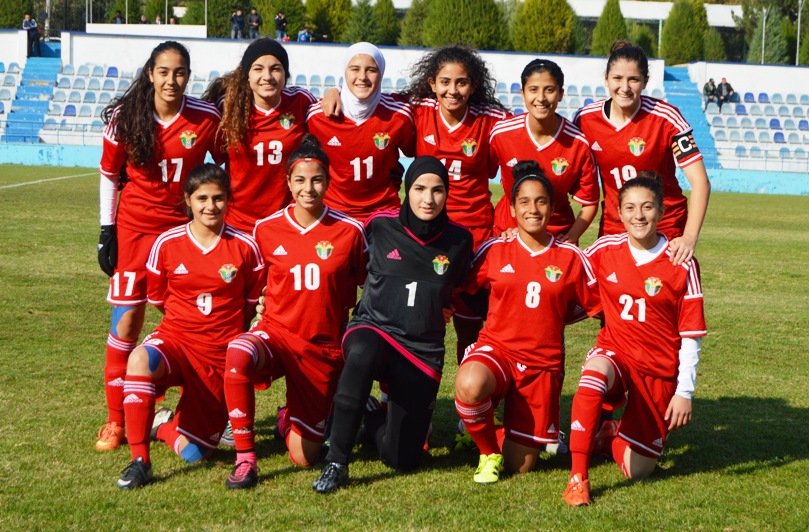 Line’s dream is about to become a reality, the 14-year-old Jordanian girl will make history later this year when she takes part in her first ever football world cup.

FIFA’s U-17 Women’s World Cup will kick off on September 30 in Jordan, the first time a Middle Eastern country hosts an international women’s football competition.

Line and 20 other girl footballers, including devout Muslims their heads covered by a scarf, have been practising hard for the tournament with a British coach.

“Here in Jordan… it was frowned upon to see a girl play football. But now things have changed,” Line said.

She still remembers how she defied social conventions in the conservative kingdom when at a younger age she decided to join the boys of her neighbourhood in a game of football.

Jordan — a key ally of the West — is a Muslim country with a Christian minority but both communities are weighed down by religious and social constraints like other nations in the Middle East.

For decades football was hands off for women but that changed in 2005 when the Jordanian federation — headed by Prince Ali, a half-brother of King Abdullah II — formed the first national female team.

Ali, a vice president of FIFA who ran but failed to be elected president of football’s world governing body, is credited with having helped Jordan’s bid to host the under-17 girls’ tournament.

In May, FIFA said on its website that the first Jordanian women players who took to the pitch more than a decade ago “have impressed” and “did not disappoint”.

British coach Robbie Johnson is confident that the under-17 girls team will shine at the upcoming world cup.

“This particular group are certainly keen to make a mark and certainly put the Middle East on the map,” Johnson told AFP as he worked the girls on one practice night.

“It can be definitely the start of something to say to women, particularly in the Middle East or in the Gulf states as well: Look you can actually play and compete,” he said.

The girls’ training for the big day is tough.

Line — a striker — and teammates listen carefully as the coach details his strategy with specific instructions to the wingers and goalkeepers, while parents sit back and watch the practice unfold.

“My goal is to get these players as competitive as possible and then who knows what may happen,” said Johnson.

Organisers of the tournament say it will reverberate beyond the pitch and contribute to change in Jordan and the wider Arab world.

“We are using football like a platform for social change,” said Samar Nassar, a former member of Jordan’s national swimming team who heads the kingdom’s organising committee.

The upcoming tournament “is an opportunity to create a durable heritage for Jordan and the region,” that would help challenge stereotypes and empower women, she said.

Line agrees. Football “has taught me many things. I feel more responsible and I have become more sociable.”

Jordanian female athlete Yasmeen Khair, is one such woman whose name is linked to change.

A gymnast who won several awards over the years and the nickname “the kingdom’s butterfly”, Khair was among the first women football players to play for Jordan.

FIFA chose her as “ambassador” of the under-17 world cup.

Her mission is two-fold, to promote the tournament and raise awareness of girls’ football.

“I speak to girls a lot. I tell them they must live this rich and unforgettable experience,” she said.

Khair said the beginnings of women’s football in 2005 was tough.

“We had to face a lot of difficulties but bit by bit things began to change,” she said, recalling how interest in female football grew in Jordan “especially that we won more tournaments than the men”.

On its webpage, FIFA quoted Khader Eid, a former coach of the women’s national team, recalling some of the hurdles that had to be overcome.

“We were conscious of the difficulties we would encounter to coach these young girls while respecting traditions and getting through to their families,” he said.

Jordan now counts 720 registered women players, a small number in a country with a population of 6.6 million but still a “decisive step” for women’s football, according to FIFA. – Agence France-Presse