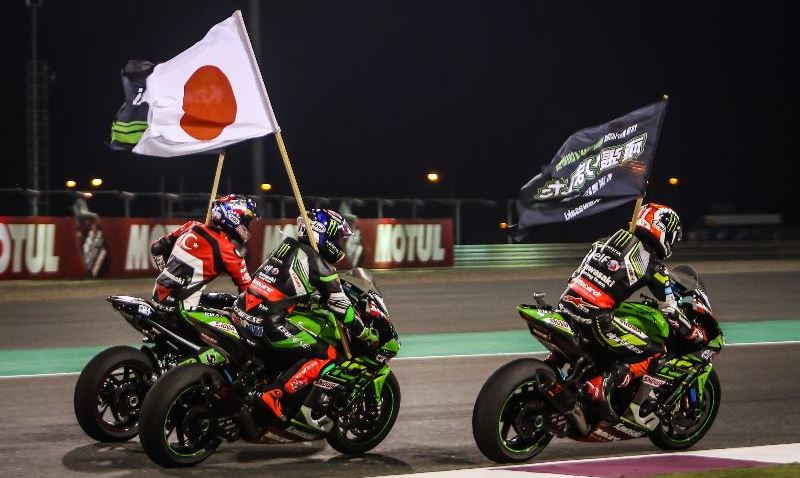 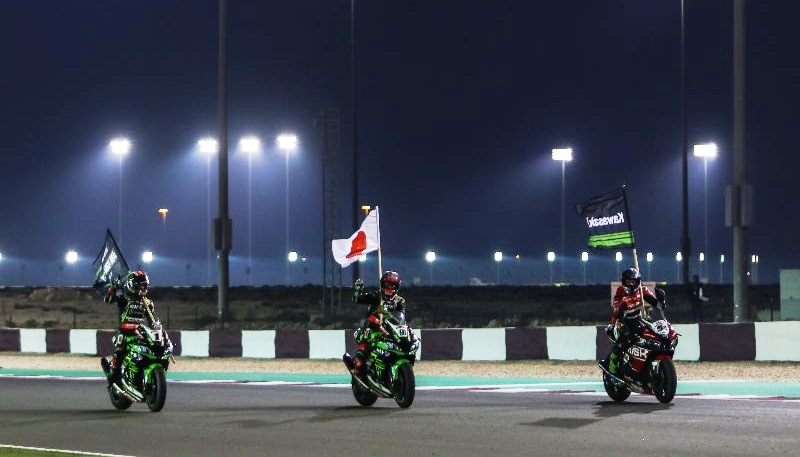 For the first time ever in WorldSBK, a Japanese manufacturer has achieved a fifth consecutive Manufacturers’ title, with Kawasaki continuing their dominance in 2019

After a season of terrific highs and unrivalled success, Kawasaki have clinched the Manufacturers’ Championship in World Superbike for a fifth time. The Japanese Manufacturer has already celebrated the riders’ Championship with Jonathan Rea (Kawasaki Racing Team WorldSBK) and achieved the best team award with the Kawasaki Racing Team WorldSBK.
With victories for Rea and Toprak Razgatlioglu (Turkish Puccetti Racing), 2019 has been a memorable one for all involved.

Despite not being able to win any of the opening 11 races, Kawasaki’s experience and prowess in recent seasons propelled them to conquer the unknown quantity of Alvaro Bautista (ARUBA.IT Racing – Ducati) and the Ducati Panigale V4 R. Important wins at Imola followed by wins at Misano (including a 1-2 in Race 2) for Rea and podium success for Leon Haslam (Kawasaki Racing Team WorldSBK) brought Kawasaki back into contention for the crown.

Donington Park would be an important turning point however, as Jonathan Rea swept to his first triple treat in front of his home crowd, whilst Toprak Razgatlioglu’s prowess was starting to shine with second place in the Tissot Superpole Race and in Race 2. A week later and Rea took two further wins at the WeatherTech Raceway Laguna Seca, whilst finishing second in the final race of the weekend. Leaving the United States of America, Kawasaki were now just one point behind Ducati, whilst Jonathan Rea sported an 81-point lead in the riders’ standings.

After the summer break, Rea won to put Kawasaki ahead and from then on in, the gap has increased each round, to the unassailable amount it is right now: (insert correct points advantage). However, a new Kawasaki was about to do the winning. Having been banging on victory door all season, Toprak Razgatlioglu finally got what he’d deserved, taking a scintillating race win in Race 1 at Magny-Cours, beating Jonathan Rea in a final lap showdown. He backed it up in the Tissot Superpole Race before Rea returned to winning ways in Race 2, clinching his fifth World Superbike crown in the process.

Heading into the final round of the season with a 37-point after two more wins at the Circuito San Juan Villicum in Argentina, Kawasaki were able to wrap up their fifth manufacturers’ crown in succession on Friday night. This makes them the first Japanese manufacturer to achieve five successive crowns, as they edge closer to Ducati’s record of 17 – seven of those being consecutive from 1998 to 2004.

Ishiro Yoda, KRT Senior Manager: “If I think back at how the season began, our competitor was so strong. We realised that it was meant to be a challenging year for us and that we should start playing a different game compared to the previous campaigns. We choose the right strategy together with our good teams, riders and bikes, and we were able to reach our target, and it is still quite unbelievable! Thank you very much!”

Jonathan Rea, Kawasaki Racing Team WorldSBK: “We had a difficult start of the year, but Kawasaki with the ZX-10RR made an incredible package that works so well in many different circuits with many different temperatures, grip levels. It is very versatile! And also, the Kawasaki supported teams! It has been quite incredible how Toprak has been inside the Puccetti Team, and also Leon at the beginning of the season. It has been a huge big effort to get this, and I am so proud to be part of the Kawasaki family, and I hope I will keep bringing them the success that we have had together in these five years”.

Leon Haslam, Kawasaki Racing Team WorldSBK: “It has been a fantastic experience for me this year. I’ve been part of the Kawasaki family for a few years, and this opportunity for me was like a dream. The record speaks for itself: five-time World Champion, fifth consecutive Manufacturers World Title and fifth Teams World Title, the Suzuka 8-Hour win. What can you ask for?”.

Guim Roda, Kawasaki Racing Team WorldSBK Team Manager: “Technically we are the human part of this project and we try to put the two things together and try to let them work well. One is the bike that Kawasaki provides us, and the other is the rider. Especially the effort that the riders make to help the bike being competitive is always a key to this success. Kawasaki proved once again the level of their package. As a team, we are proud to have helped Kawasaki reach this success. Congratulation to Puccetti that with a smaller budget he was been able to make the bike so competitive, and especially Toprak for what he has done this year”.

Toprak Razgatlioglu, Turkish Puccetti Racing: “I am really happy for this achievement. I tried my best to help the Kawasaki family, even if it has not been an easy year for me. My first win was incredible, and I think it was my best ever race”.

Manuel Puccetti, Turkish Puccetti Racing Team Manager: “During the last six month we did a great job together with Toprak. We are proud that for the second year in a row we contributed to Kawasaki title. It was our best season in WorldSBK and we hope we will continue like this”.