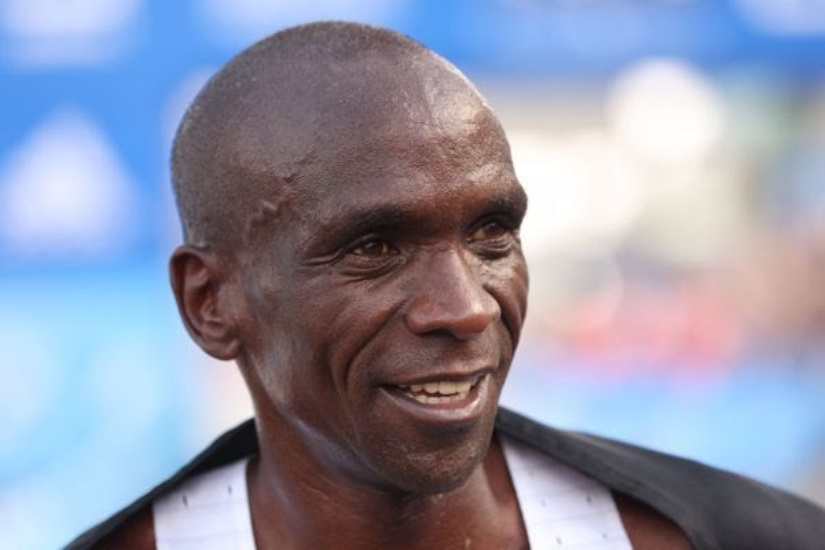 The sight was a familiar one, Eliud Kipchoge running through the Brandenburg Gates and charging towards the finish line at the BMW Berlin Marathon. But the main difference on Sunday (25) was the fact that he reached that landmark quicker than he had done in his four previous appearances in the German capital.

The clock had just ticked over to two hours as he ran under the arches. Past experience told him that there was just a minute of running left. He knew that his world record of 2:01:39 would soon be history; the only question was by how much.

Moments later, his stride still remarkably bouncy for someone who had just covered 26.2 miles quicker than anyone ever had done in an official race, Kipchoge crossed the finish line in 2:01:09, a 30-second improvement on the world record* he had set on the same course four years ago.

At one point it had seemed as though he had perhaps overcooked things, given his remarkable pace in the first half (59:50). But Kipchoge, now in his 21st year of racing internationally, knows his body better than anyone. He knew that even with a drop of pace in the second half – which, unsurprisingly, happened (it was ‘just’ 1:01:19) – he could still break the world record.

From 25km onwards, Kipchoge was out on his own, his lead growing with every stride. Over the course of the final 16 kilometres, he opened up a gap of almost five minutes on the rest of the field as he notched up his 15th victory in official marathon races, his fourth in Berlin.

“Berlin is a place that can give a person the chance to push the limits,” said the 37-year-old. “I’ve never believed in limits.”

Video:
• Highlights of the 2022 BMW Berlin Marathon (YouTube)
• News clip highlights (download)
• Rough cut (download)
Please note: only one minute of the elite races may be used for news purposes. This does not include mass pictures, start & finish, reactions after the finish.

Since bursting onto the scene as an 18-year-old at the 2003 World Championships in Paris, Kipchoge has charted his career path with precision, proving to be not only an indomitable spirit but also one of the most versatile distance runners of his generation.

But his successes on the roads may not have happened had it not been for a pivotal moment in his track career in 2012.

Kipchoge finished seventh in the Kenyan trial 10,000m race at the Diamond League meeting in Eugene that year, then finished in the same position three weeks later in the 5000m at the Kenyan Trials. Aged 27 at the time, and having earned bronze in 2004 and silver in 2008, Kipchoge had missed out on a third Olympic appearance.

It influenced his decision to move to the roads, though, and he immediately showed promise. He clocked 59:25 on his half marathon debut in Lille in September 2012 and went on to represent Kenya at the World Half Marathon Championships in Kavarna later that year, placing sixth.

He moved up in distance again and won the Hamburg Marathon in April 2013 in 2:05:30, the sixth fastest marathon debut in history at that time. Five months later, he improved his marathon PB to 2:04:05 to finish second in Berlin in a race in which the world record was broken.

It wasn’t long before he returned to the top spot of a marathon podium. His 2:05:00 triumph in Rotterdam in early 2014 marked the start of a six-year winning streak at the marathon, notching up 10 successive victories.

Up until September 2018, the one accolade that had eluded Kipchoge was the world record. But a faultless 2:01:39 run in Berlin saw Kipchoge smash the mark by one minute and 18 seconds.

In his one race of 2020, Kipchoge’s winning streak came to an end at the London Marathon when he was hampered by an ear problem, eventually finishing eighth. But he rebounded in 2021 with a victory in Enschede before going on to successfully defend his Olympic title in Tokyo by a significant margin.

What sets Kipchoge apart is not just his incredible winning record (which currently stands at 15 wins from 17 races); it’s also his string of fast times. He has run 2:04:00 or faster on seven occasions and 2:05:00 or faster on 13 occasions – and that’s not including his 1:59:41 and 2:00:25 performances in experimental and unofficial races.

Now aged 37, Kipchoge has been racing internationally for 21 years. After each landmark achievement, the question is always asked: what next for Kipchoge? And still he continues to surprise his army of fans worldwide.