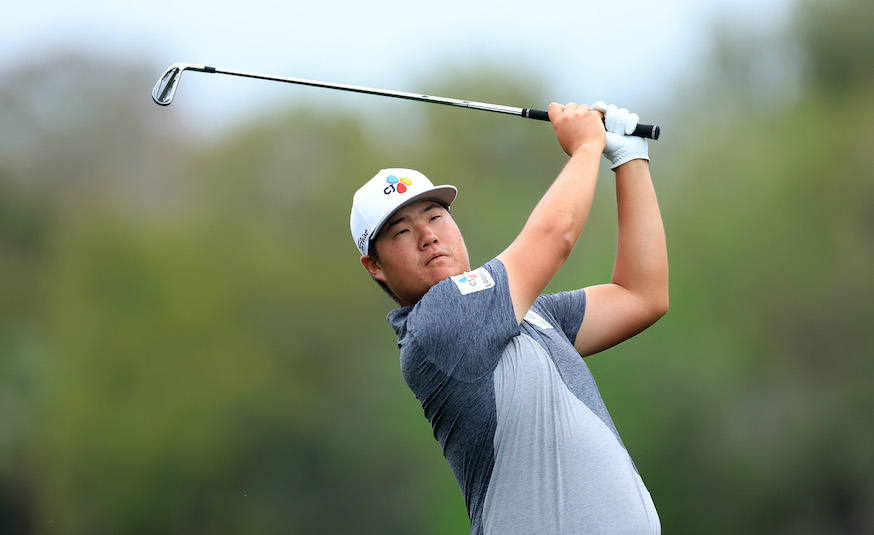 Korea’s Sungjae Im quietly seized his first ever lead in a major championship following an opening 5-under 67 at the Masters Tournament on Thursday as Tiger Woods hogged the limelight with a triumphant return to competition, some 14 months after a horrific car accident.

Away from the glare of Augusta National’s patrons who were mesmerized by Woods’ latest comeback from a serious leg injury, the 24-year-old Im produced a workman-like performance with one eagle, five birdies and two bogeys to lead by one from Presidents Cup International teammate Cameron Smith, who bookended his round of 68 with double bogeys.

Former Masters champions, Danny Willet and Dustin Johnson, newly-minted World No. 1 Scottie Scheffler and Chilean rising star Joaquin Niemann all shot 69s as the 86th edition of the Masters got off to a tantalising start after a brief weather delay.

Im, a two-time PGA TOUR winner, and in-form Smith, who won THE PLAYERS Championship last month, were joint runners-up at the 2020 Masters Tournament to Johnson and both are chasing their first major title.

“Still have three more days to play, and I think with the rain passing, the greens are going to get firmer, the fairways are going to get firmer, so I just have to be prepared to do the same thing I did today,” said Im, who hit 12 fairways and 13 greens in regulation. “I drove it well most of the holes and it gave me opportunities to have better second shots. I’m glad with how everything went.”

The Korean leader arrived at the year’s opening major as the eighth ranked player on the FedExCup standings following one victory and three top-10s but since February, his form has taken a bit of a dip with a best finish of tied 20th. Im said he received a dose of positive vibes during the Par-3 Contest on Wednesday when his father, Ji Taek, who was caddying in the traditional curtain-raiser, stuck a sweet tee shot next to the pin on the final hole, much to the amusement of Scheffler, Sam Burns and Billy Horschel, who were waiting in the group behind on the tee box.

“I received some good vibes from my dad. It was the most beautiful shot I’ve seen. It was like a professional shot. When he was setting up, Scottie, Sam and Billy, they were having a crack at my dad, and it got me, too, so I was laughing,” said Im.

In recent years, the man nicknamed Ironman Im has established himself as one of the stars on TOUR with his all-round precision game and feels Augusta National is suited to his aggressive style of play as he seeks to become the second successive Asian winner at the Masters, following Hideki Matsuyama’s historic triumph 12 months ago.

“It was great to have a great finish at my Masters debut in 2020, and because of that experience, I feel comfortable when I come to Augusta. I feel like I can play well here every time. It requires good shots overall from tee to green and to put shot into spots where I have a chance to attack the green is important, so I think it fits my game,” he said.

“It’s a great memory that I’ll carry with me … a feat that I really am proud of. But we’re only one day in. I’ve got three more days to play. I just want to keep this momentum going. I have my utmost respect for him (Hideki). I’ve watched him play since I was a kid, and hopefully good things will happen.”

Woods, a 15-time major champion and holder of a record-equalling 82 PGA TOUR victories, was no doubt the story of the day. A single-vehicle accident in Las Angeles in February, 2021 nearly cost the 46-year-old his right leg, if not his life, and with a rod inserted into his right tibia, which suffered multiple fractures, and screws and pins stuck into his right foot and ankle in reconstructive surgery, many thought it would mark the end of his illustrious career.

An efficient 1-under 71 in his first official round in 508 days put Woods in a share of 10th place and four shots of the early pace, and raising optimism of more Tiger roars in the coming days. “I’m right where I need to be,” said Woods, who made three birdies against two bogeys.

The American legend knows the recovery process over the next 24 hours will be equally important if he is to sustain a legitimate challenge and emulate Jack Nicklaus’ victory here in 1986 when the Golden Bear won the Masters at age 46 as well.

“I am as sore as I expected to feel,” said Woods. “Like I was telling the team all week, come game time, it will be a different deal. I figure once the adrenaline kicks in and we get fired up and I get into my little world, I should be able to handle business. This is only one round. We’ve got three more to go. There’s a long way to go and a lot of shots to be played.”

Weather: Mostly sunny with morning thunderstorms. High of 74. Wind W 10-15 mph, with gusts to 25 mph. Due to thunderstorms, all starting times were delayed 30 minutes.