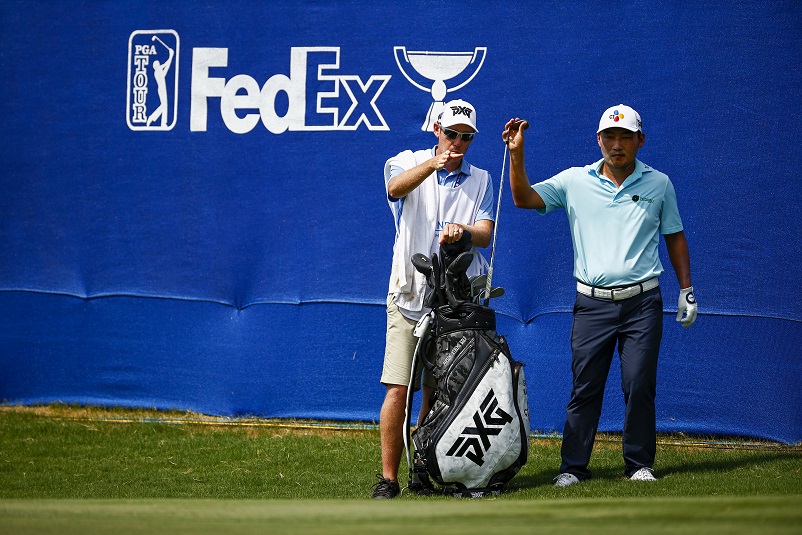 Korea’s Sung Kang fired his lowest round of the season with a 6-under 64 to share second place and lie two strokes back of leader Russell Henley after the first round of the Wyndham Championship on Thursday.

With eight birdies and two bogeys on the card, the 34-year-old produced some of his best golf at Sedgefield Country Club in Greensboro after enduring a difficult past 12 months where he has not registered a single top-25 finish.

The one-time winner on the PGA TOUR needs an outright win in this week’s final event of the Regular Season to qualify for the lucrative FedExCup Playoffs for a sixth straight year.

“I played well, overall everything was going well. I had good tee shots which helped me to play my second. Even though I missed some putts, I think I am still working on my putting and will take some time to practice this afternoon. The short game and putting will be the key to winning this event and I will prepare the best I can,” said Kang, who ranked eighth in Strokes Gained: Tee to Green in the first round.

In 30 starts this season, Kang has been in the money on only 13 occasions and while his winner’s exemption is through the 2021-22 season, he is not giving up hope in qualifying for the Playoffs. He is presently ranked 188th on the FedExCup points list, with the Top 125 qualifying for the first Playoffs event, THE NORTHERN TRUST next week.

“I’m aware of that, but I’m just going to try to take it one shot at a time, do the best that I can. Everything will take care of itself,” he said.

Kang made three birdies on his outward nine, all from inside of 12 feet, and hit five more birdies and two bogeys coming home. His longest birdie conversion came on 14 from 29 feet while a bogey on 18 after a poor drive and a missed putt from five feet left a bitter taste in his mouth. This is his sixth appearance at Wyndham where his best finish was T46 in 2016.

Countrymen K.J. Choi, Sungjae Im and Si Woo Kim, winner of the Wyndham Championship in 2016, all carded 66s to share 19th place, as with Thailand’s Kiradech Aphibarnrat who like Kang also needs a win to qualify for the Playoffs and more importantly, keep his PGA TOUR card. He also needs a good result to be eligible for the Korn Ferry Tour Finals starting next week, which is another opportunity to keep his playing privileges on TOUR.

Another Korean, K.H. Lee, returned a 67 while India’s Anirban Lahiri was 3-under through 16 holes of his round when play was suspended for the day due to fading light. Chinese Taipei’s C.T. Pan, who won a bronze medal in the Olympic Games, shot a 68 for T61 position.