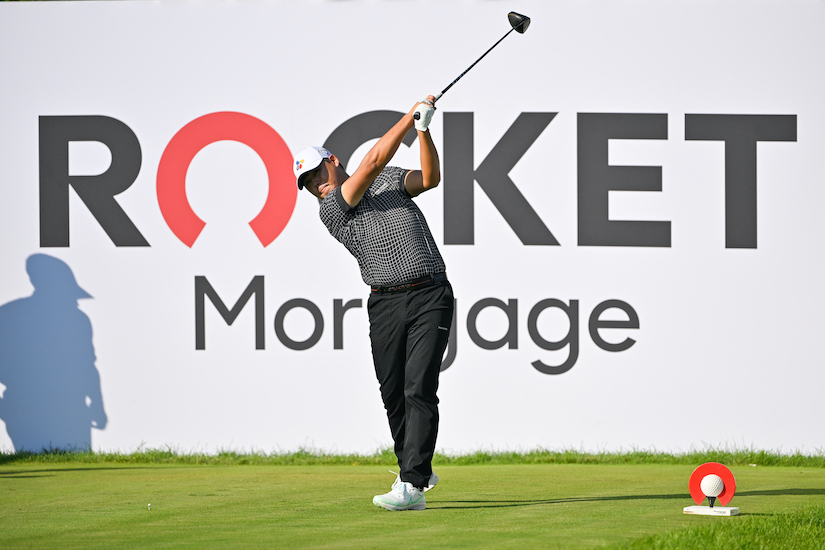 Seeking a fourth PGA TOUR title, Korea’s Si Woo Kim signed for a solid second round of 4-under 68 at the Rocket Mortgage Classic on Friday for tied seventh place and six back of halfway leader Taylor Pendrith.

The 27-year-old’s impressive iron play made the difference as he hit 13 greens in regulation to mix five birdies against a lone bogey at Detroit Golf Club. He began his round in convincing fashion with birdies on Hole Nos. 3, 4 and 7, with the latter two coming from inside of three feet, to turn in 33.

He converted a 29-foot birdie putt on the par-3 11th but gave the shot back at the par-5 14th after finding water. But Kim, the 2017 PLAYERS Championship winner, bounced back at the 17th with another brilliant approach that landed to within five feet to collect his fifth birdie of the day.

“My putter helped a lot for getting a low score today. At the back nine, it was bit hard, but I did some good saves to keep my score and ended up with a solid round,” said Kim, whose last win on TOUR was the 2021 The American Express.

His good form ensures that he maintains his chase for an International Team spot in the Presidents Cup, which will be played at Quail Hollow in September. Kim featured in the 2017 edition at Liberty National.

“If I keep playing good over the next few weeks, I have a chance to get into the President Cup team. I hope this could happen to me,” said Kim, who stands at 9-under 135. “I have played solid in the first and second round here, so I won’t try anything different. I will keep this momentum and keep to my game plan, and I think it will get me a good result at the end of the week.”

Pendrith, who is chasing for a maiden PGA TOUR triumph, birdied five of his seven opening holes en route to a superb 65 which propelled him into a one-shot lead on 15-under 129 over Tony Finau (66), the overnight co-leader and last week’s 3M Open champion.

Another Korean, Sung Kang, who has missed seven cuts from his last eight starts, moved up to T26 on 138 following a second successive 69 and was joined by Thai pair Kiradech Aphirbarnrat and K.K. Limbhasut, who Monday qualified for the event.

While Kiradech, who is fighting for his PGA TOUR card, battled to a 71 to slip from T8 to T26, Limbhasut rose 27 rungs from his overnight position following an impressive 68. It was certainly a day to remember for the 26-year-old who is featuring in only his second PGA TOUR start after missing the cut in his debut at the Farmers Insurance Open in 2020.

“I think I learned a lot from my last start at Farmers. I think once I Monday-ed the last time, I felt like I already accomplished something, like that was a goal,” said Limbhasut, who has status on the Korn Ferry Tour.

“I’m just trying to focus on my process, like really take it shot by shot, try to hit the shots that I’m seeing and thinking, and then I’ll let the results take care of itself.  I don’t want to set like I want to finish top-3, top-5 or top-10 … I’m just going to try to focus on myself and that’s all I can do.”

Another Korean rising star, Joohyung “Tom” Kim, who recently accepted a Special Temporary Membership on TOUR,  carded a 72 to drop to T59 to progress into the weekend rounds as he seeks to secure his PGA TOUR card with one tournament remaining in the Regular Season after this week’s Rocket Mortgage Classic.