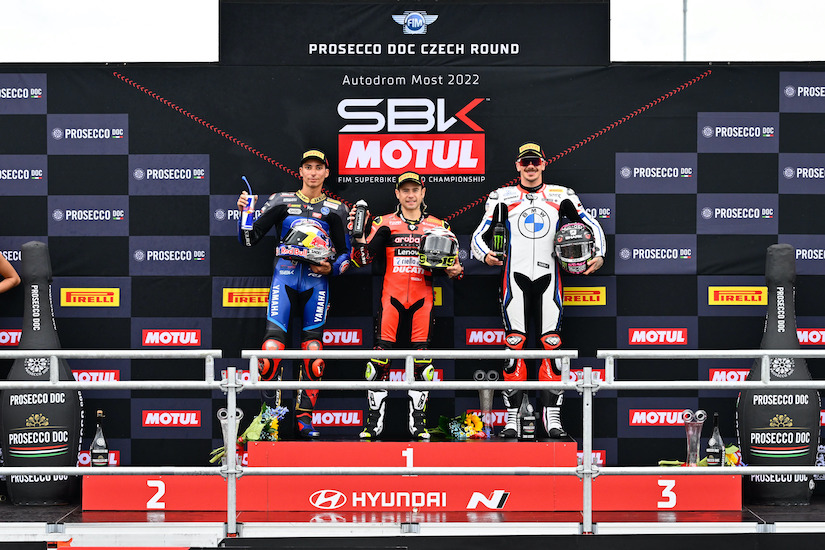 “I knew that here it was important to not lose time in the first corners because here with this rear tyre, with the harder compound, I struggled a little bit. I needed a couple of laps to warm it and after that I could make the same pace as Rea and Razgatlioglu. By mid-race, some drops of rain started to fall. It was a tricky moment. I saw that Rea and Razgatlioglu struggled. But in that moment, I felt quite confident, so I decided to take the lead. When the rain stopped, I tried to keep pushing and not make mistake. I’m really happy and also because it’s the 1000th podium of Ducati and to celebrate it with a victory is very special.”

“Today I tried to fight for a great position. I tried to escape but it wasn’t possible because the acceleration was not good in the corner exit. I kept fighting for the podium. In the last lap, we had a great battle with Scott. I saw he was very strong in the last sector and also the second sector, I had just one chance. I tried. I passed him but I almost crashed, we both went a bit wide together. Anyway, we finished on the podium and we take good points in the Championship.”

“From Donington we’ve made a step. There were a few question marks if we’ll continue this rhythm. This weekend we’ve been strong. In the race we showed good pace in the middle of the race to catch the front group. With a little bit of rain which was in my favor as well. To have another podium this weekend is a massive achievement.”

“We have to be content with our race; I felt really good but just ran into some little issues at the end of the race which held me back in the braking areas in a couple of corners. A little bit of brake fade, with the lever coming all the way back to the bar and I couldn’t put the pressure on the lever. Coupled with the fact that I couldn’t put the bike in position or stop so much, I was losing a little bit of time. Anyway, I have to be very content as we made a step from yesterday with my consistency in the middle part of the race and the pace was quite good. I think there were just some spots of rain halfway through the rain and I was out front, and I didn’t want to be the guinea pig to go down in the wet.

“I’m really happy about the race. We finished in the top five and this was the goal. Yesterday I wasn’t happy with the feeling with my bike. But today with the team we did a very good job. We will see tomorrow. I hope to stay with the top three guys. It’s difficult but not impossible. We are here for this.”

“I did a really good start but then I made a small mistake in the fourth corner and I ran wide. When I returned to the track, I lose immediately my position to Redding and Bassani. I tried to stay with them, and I tried to push but I made many mistakes during the race. I was trying to close the gap to the front guys. When it started to rain, they were a bit slower so I tried to close the gap. In the end, it’s a positive weekend for us, we started in a good way. For sure it’s not our position but I need to be happy because the feeling with the bike is much better. Tomorrow we have another opportunity.”

To note:
Iker Lecuona (Team HRC) was eighth for his 16th straight race in the points.
Oliver Konig (Orelac Racing VerdNatura) finished in 16th place in Race 1 for his home round.
WorldSBK action resumes on Sunday from 09:00 (Local Time), followed by Tissot Superpole Race at 11:00 and Race 2 at 15:15.