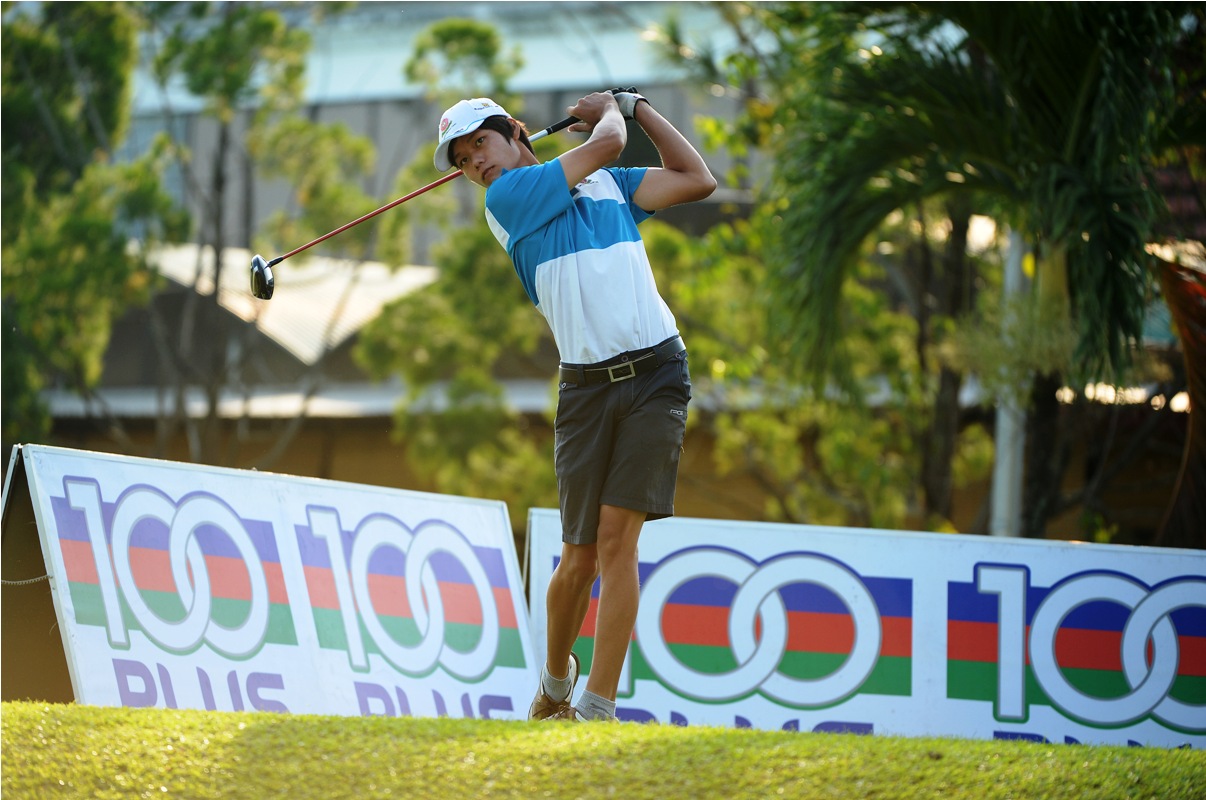 South Korean Park Sang Ho, who has been based in Sabah for the past eight years, registered a stunning five-under 67 to grab the first round lead on the opening day of the 100PLUS Malaysian Junior Open Golf Championships at the Sabah Country & Golf Club in Kota Kinabalu today.

Sang Ho, carded six birdies against one bogey in his round of 67 to install himself as a serious contender for the boys’ title in his third appearance in this tournament which is being staged for the ninth year. He did not compete last year.

The South Korean carded birdies on the second, fourth, sixth and eighth on the front nine. He stumbled at the start on the back nine with a bogey on the 10th but recovered with birdies on the 15th and 18th on the challenging course.

Sung Ho, who speaks a smattering of Bahasa, has been staying in Kota Kinabalu for the past eight years after his father decided to move the family to Sabah as “it is the best place stay.” His father still works in South Korea.

“This is my personal best score here. My previous best was 71 and I am extremely pleased with my performance, especially with my putting,” said Sang Ho, who carded a 32 on the front nine and 35 on the back nine for his 67.

“It is a good start for me and I hope to keep the momentum in the remaining rounds. I have never won a tournament in Malaysia and things do look for my maiden win. This course is my ‘home’ course because I train and play golf here.”

While Sang Ho, who has made up his mind to be a professional golfer as a career, was all smiles, defending champion Amir Nazrin Jailani’s round was marred by a double bogey on the 14th and ended the day with a three-over 75.

Amir,17, who will be sitting for his Sijil Pelajaran Malaysia (SPM) examinations later this year, has however vowed to fightback in the remaining two rounds.

“I was let down by my second shots today. I will not let my poor score in the first round stand in my way in the remaining rounds. It is not over yet…I am still very much in the race,”said Amir, with a smile, as he headed to the driving range after submitting his scorecard.

The Selangor-lad added that he has put his books aside to defend his title and and is fully focused on the 100PLUS tournament that has attracted nine countries, including Malaysia. The other countries are South Korea, Philippines, Singapore, Taiwan, Australia, England and Hong Kong.

“It is all green in my mind. I am fully focused on the (golf course).”

Another Malaysian player Bryan Teoh, who won two titles in the United Kingdom in July and was expected to mount a serious challenge, carded a disappointing five-over 77. He four putted the par five sixth hole on the front nine. But he made amends on the back his return flight with par golf.

“Mentally I am still in the game. It has happened to me before overseas and I am confident of bouncing back tomorrow. I did not lose my mental strength on the return flight. This is important and will keep me in the race,” said Bryan, who won the Carris Trophy (Under-16 category) in London and the Loretto Schools Golf Championships in Glasgow in July.

In the girls event, Harmie Constantino of the Philippines is the first round leader after scoring a one-under 71. Chang Yi Chia of Taiwan is second after playing par while Filipina Samantha Martirez is third place on 74.  Raeysha Surendran was the best placed Malaysian at 75.