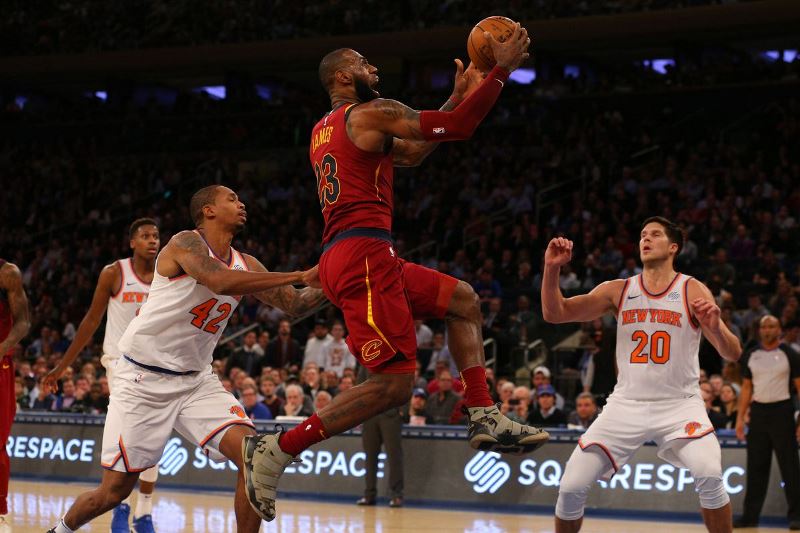 Four-time NBA Most Valuable Player James added 12 assists and nine rebounds for the visiting Cavs, who were down by two dozen points in the third quarter before storming back for the victory.

“I thought his defense is what turned it,” Korver said of James. “He’s always going to get in the paint and make plays. That is where he is really special. He is able to do everything. And he showed that in the fourth quarter.”

Korver, who sank two 3-pointers in the last 4:35, made four late free throws to offset baskets by Kristaps Porzingis and Tim Hardaway Jnr. James missed two late free throws but Jeff Green grabbed the rebound for Cleveland to deny the Knicks a potential tying shot at the buzzer.

Dwyane Wade added 15 off the bench for Cleveland while Hardaway led New York with 28 points and Porzingis added 20.

“You can’t just come in and mess with a rookie like that. Mess with a grown man,” Kanter said. “You can call yourself King, Queen, Princess, whatever, but you can’t punk us.”

Told of the remarks, James said, “We got the win. I’m not going to say that guy’s name again.”

Even with star guard Stephen Curry out with a bruised thigh, the defending champion Golden State Warriors dumped visiting Orlando 110-100. Kevin Durant had 21 points and Draymond Green added 20 to lead the Warriors.

Greek star Giannis Antetokounmpo scored 27 points to lead the Milwaukee Bucks to a 110-103 victory over visiting Memphis. John Henson and Khris Middleton each added 17 for Milwaukee.

New Orleans forward Darius Miller sank four 3-pointers in the final 5:45 and netted 14 of his 21 points in the fourth quarter to lift host New Orleans over Atlanta 106-105. E’Twaun Moore led the Pelicans with 24 points and DeMarcus Cousins added 22 points, 16 rebounds and seven assists.

Jordan Clarkson scored 25 points in 25 minutes off the bench to help the Los Angeles Lakers defeat host Phoenix 100-93. Devin Booker scored 36 points in a losing cause.