Home Football Leicester on the brink as pressure mounts on Tottenham

Leicester City’s remarkable season could see them crowned champions of England for the first time in their 132-year history without kicking a ball on Monday if second-placed Tottenham Hotspur fail to keep the title race alive.

Anything less than a Spurs victory away to London rivals Chelsea at Stamford Bridge (1900GMT) — a ground where they haven’t enjoyed a league win for 26 years — will see Claudio Ranieri’s men, 5,000/1 outsiders in pre-season, complete a stunning triumph.

But as the eyes of English football, as well as fans round the world captivated by Leicester’s rise after the club were nearly relegated last season, turn to Chelsea’s west London ground, Foxes manager Ranieri won’t be watching the game.

Instead the Leicester boss is due to be on a plane back from his native Italy after having lunch Monday with his 96-year-old mother.

But even if Tottenham beat Chelsea, last season’s champions, Midlands club Leicester can secure the title in front of their own fans by defeating Everton at the King Power Stadium on Saturday.

Ranieri, sacked by Chelsea in 2004, has urged his side to keep their concentration on the Everton match as he expects Spurs to win their three remaining league games.

“In my mind Tottenham will win all three matches,” said Ranieri after Leicester’s 1-1 draw away to Manchester United on Sunday took them to within touching distance of the title.

“I know all the city (Leicester) is blue, but we must continue to stay concentrated without special fireworks.

“We have to stay there, on the pitch, and think there will be another tough match.”

Even before Monday’s kick-off there was a fresh award for Leicester, with England striker Jamie Vardy voted the 2016 Footballer of the Year by England’s Football Writers’ Association.

The 29-year-old striker took the award ahead of team-mate Riyad Mahrez, who had already won the Player of the Year award voted on by his fellow professionals.

Vardy, who only a few seasons ago was playing non-league football, has scored 24 goals for club and country this season — a haul that includes scoring in a Premier League record 11 consecutive games.

Accepting the “great honour”, Vardy said: “We’re all totally focused on getting over the line in the final two weeks of the season and turning a great season into one we’ll never forget.”

Despite the banned Vardy’s absence in their last two games because of his red card against West Ham United, Leicester have still taken four points from a possible six. That suggests that the Foxes can cope without Danny Drinkwater too.

The midfielder will serve a one-match suspension against Everton after being sent off at Old Trafford, having received two yellow cards.

But while Vardy saw his ban increased for an aggressive reaction, Drinkwater escaped any additional punishment Monday after referee Michael Oliver opted against reporting his response to being dismissed.

As Leicester gets ready to party, Britain’s bookmakers are bracing themselves for a record football pay-out of £15 million ($22 million, 19 million euros) should the Foxes take the title.

Leading firm William Hill are set to hand over £3 million alone and spokesman Rupert Adams said Monday: “I wish we had diversified our retail portfolio to include a few pubs in Leicester!”

The scale of Leicester’s looming triumph can be gauged by the fact that when the 5,000/1 odds were first offered in August, bookmakers considered there was greater likelihood of pop music great Elvis Presley, who died in 1977, being found alive (2,000/1).

No wonder that, in the words of one of Elvis’s greatest hits, the British betting industry is “all shook up”. – Agence France-Presse 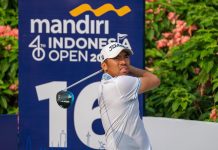