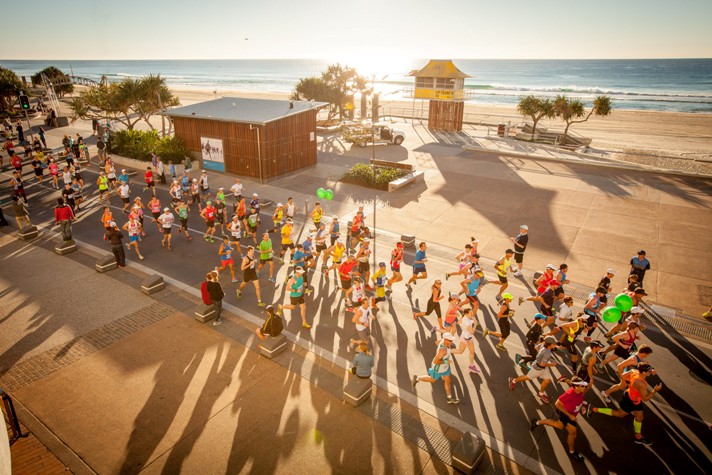 Not for Gold Coast lads, and best mates, Chris Evans and Antony Sedman – aka Tofes and Ant – who only took up running last year, but are backing themselves to complete an epic 29-plus endurance events in 2016… a distance equivalent to running from London to Moscow.

“Even though we ended up running eight big events last year – one marathon, two 30km events, four half marathons and a 10km race – in the space of six months, we feel we can do more this year and run larger and more unique races to keep us out of our comfort zone.”

Coming up on the endurance duo’s ‘must-do’ list are the Gold Coast Airport Marathon (2-3 July) and Noosa Triathlon Multi Sport Festival(30 October) – two of more than 116 events included on Tourism and Events Queensland’s It’s Live! In Queensland calendar, showcasing Australia’s best live events in some of the most spectacular destinations on the planet.

While the Gold Coast Airport Marathon stakes its claim as the first marathon course in Australia to hold an International Association of Athletics Federations (IAAF) Road Race Gold Label, placing it in esteemed company of marathons in New York, Boston and London, the Noosa Triathlon Multi Sport Festival is billed as the largest Olympic-distance triathlon in the world.

Describing themselves as ‘ordinary blokes’, Chris and Antony, both aged 24, are capitalising on the state’s position as a global endurance capital, mirrored in an increasing line-up of the world’s blue ribbon events jostling for a place under Queensland’s sun, also including the Cairns Airport IRONMAN Asia-Pacific Championship through to 2018 – a challenge they hope to tackle next year.

Their ultimate aim: to raise $20,000 for Cancer Council Queensland. The pair who go by the team name, The Wounded Pelicans, have even created an endurance ‘tool kit’ entitled The Ultimate How-To Guide To Get Over The Mental Wall – 6 Tips That Will Revolutionise The Way You Run. It can be downloaded via www.thewoundedpelicans.com.

“Running was the way we started to get fit,” says Chris. “Then, it was time to train for a marathon to tick if off the bucket list. But because we loved it so much and kind of got addicted, it’s now become a lifestyle for us.

“We wanted to include some of Australia’s best known events on our schedule, which meant including the Gold Coast Airport Marathon. I ran it last year and it was definitely the best full marathon I’ve run in because of the support from the crowd, the amazing scenery and sheer number of people.

“We are definitely going to continue after 2016: we have a vision to inspire people to get out of their comfort zones and be constantly striving and would love to start a movement of #nocomfortzoning!”

On 3 July, Chris, a mechanical designer, and Antony, a deckhand, will tackle Australia’s premier road race set on one of the world’s most scenic courses, hugging Gold Coast’s surf beaches and broadwater – also renowned as one of the flattest and fastest in the world. Last year, a record 6,118 people competed in the full marathon.

This year’s event, which does not close registration until 1 July, is tracking towards record international figures, with close to 1,000 athletes already signing up from Greater China, including China, Taiwan and Hong Kong. Competitors from Southeast Asia – notably from Singapore, Malaysia and Indonesia – are also registering en masse, with numbers expected to exceed last year’s record of over 530 from this region. In 2015, more than 3,000 international athletes (from 57 countries) travelled to the event.

Don’t miss the action: the Gold Coast Airport Marathon (2-3 July) is one of more than 116 events on Tourism and Events Queensland’s It’s Live! In Queensland calendar: www.queensland.com/events