Palembang: Liverpool scored two second half goals to demolish Guangzhou Evergrande and fortified their move into the quarterfinals of the Frenz U18 International Cup at the Gelora Sriwijaya Stadium in Jakabaring today.

However, on a night when size did not matter but determination was the order of the day, it was Guangzhou who made mighty Liverpool struggle in this Group A encounter.

The match ended with Liverpool winning 2-0 from Canon Tenes Sergi’s goals (65th and 75th) but the plaudits goes to the Chinese for their determination in taking much control of the match, especially in the first half.

While the Reds were unlucky not to have scored in some of the chances that came their way, it was Guangzhou, who suffered a 5-1 humiliation against Dutch side Feynoord FC last Saturday, who won the hearts of the Indonesian fans here.

Striker Wan Jinze bloated a 13th minute strike with goalkeeper Jackson Benjamin left all alone and midfielder Rao Weiquan fired inches over the bar four minutes later. There were many more chances that came but Guangzhou failed in its attempts.

On the opposite end, Welsh international Wilson Harry, midfielders Correia Gomes Tani and Johnston Thomas equally failed to make solid breakthroughs, and even if there were, the Chinese wall was fortified with almost eight players camping in the box.

Liverpool, however, dominated the second half but was guilty off misfiring until Sergi’s strikes which came at a time Guangzhou defence was already leaky despite a brave performance by goalkeeper Fang Ziyong throughout the match.

In Palembang, Danny Van Harren’s 70th minute goal saw Feyenoord FC hold Frenz United Indonesia (FUI) to a 1-1 draw and a step closer to the quarterfinals stage from Group A.

With four points in the bag, Feyenoord play Liverpool FC on Wednesday while FUI will need to win against Guangzhou and in the process hope for a Liverpool victory over the Dutch to harbour chances of joining the big guns in the last eight.

“We are lucky to win this match as Frenz Indonesia was in complete control of the first half. After taking a 1-0 lead I thought they would put more pressure on us in the second but instead they slowed down,” said Feyenoord head coach Johannes Gosgens. “I am very proud of my players for working hard despite the heat and humidity which was against us,” he added.

FUI, who had surged into a 5-4 lead over Liverpool in the FIC 2015 opening Group A match last Saturday before the Reds had secured a 6-5 triumph minutes into the final whistle, were a transformed side today.

Cheered on by the Governor of South Sumatera, H. Alex Noerdin, and an estimated 3,000 fans, FUI had learned from that bitter lesson against the English and were all over the Dutch in the early part of the game, and the fans enjoyed what they saw.

However, it was FUI who had a major share of ball possession and were in control. They had six corners against two for Feyenoord in the first half.

But it was the brilliance of defender Nima Hamid Daghestani that turned the match around just seconds before interval. The Iranian moved up to support the strikers and saw the ball land at his feet at the top of the box. Without hesitation, Nima packed it into the left side of goalkeeper Theodoras to give FUI 1-0 lead.

The second half saw both sides playing an aggressive game and by the 55th minute were reduced to 10 men after Malaysian referee Zulkifli Ahmad red carded FUI’s Yugan Poobathy and Feyenoord’s Mohammed El Hankouri for an off the ball incident.

Feyenoord, however, found the breakthrough in the 70th minute when Danny Van Haaren finished from close range.

Gamba Osaka stayed in a strong position to reach the quarter-finals after thrashing PVF Vietnam 4-0 in a Group C match at the Maybank Sports Complex in Bangi today.

The Japanese outfit’s accurate passing game was too much for the Vietnamese, who conceded three goals in the second half and now face an uphill task to stay in the competition.

PVF Vietnam started much better against the Japanese and looked like they could be the first to score. The momentum only lasted for a short moment as Gamba’s efficient passing put them ahead.

A good attempt from Gamba rebounded off the top left corner of the goal post, Ryo Hatsute picked up from there to send the ball crashing past goalkeeper Nguyen Thanh Tuan on 12th minute.

PVF Vietnam, however, lost skipper Mac Duc Viet Anh in the 31st minute after injuring his shoulder following a collision with his goalkeeper, but the Vietnamese managed to prevent Gamba from breaching their net in the first half.

Gamba seized the initiative after the interval with their first move into PVF’s penalty box a minute later resulted with Taichi Takeda scoring Gamba’s second goal. Mizuki Ichimaru got on the score sheet in the 61nd minute with a volley from the right flank, and Meguru Odagaki made it 4-0 a minute later. 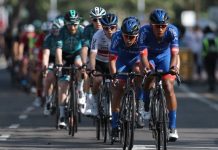