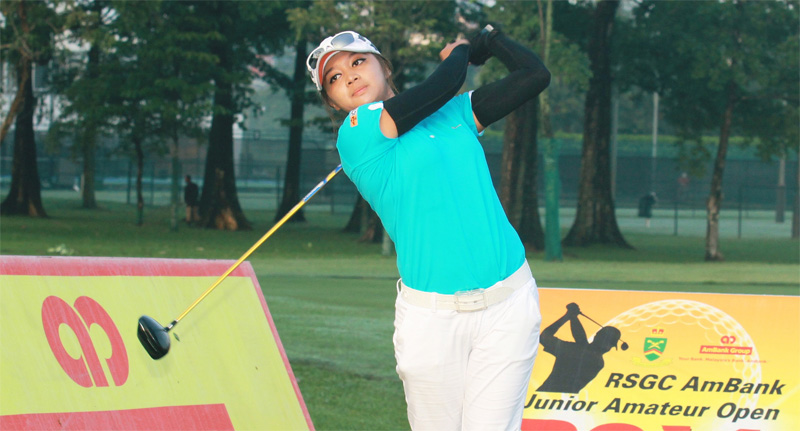 Favourites Low Khai Jei from Perak and Princess Mary Superal of Philippines stretched their respective leads in the Boys and Girls U-18 category after the second round concluded in today’s RSGC AmBank Junior Amateur Open Golf Championship 2014 at the Royal Selangor Golf Club (RSGC).

Khai Jei emulated his yesterday score of 68 to amass a total of 136 to stay a massive 16 strokes ahead of new second placed rival, Danial Mohd Sidek from the Air Force Recreation Club (KRTU) and T. Kishaan from Kota Permai Golf Club, both on 152. Judging by his score, he looks a hot favourite to clinch the title when the final round tees off tomorrow morning.

Another probable winner for the title in the Girls U-18 category is Philippines Princess Mary who shot a two under 70 in the second round to card a total of 141 and lead by a whopping 18 shots. In second place is Nyca Khaw from KRTU with 159, followed by S. Raesha from Kota Permai Golf Club with 161. The reigning SEA Games champion flawless display today could help her clinch the title barring any upset from her rivals or the weather.

In the Boys U-15 category, defending champion Bryan Teoh’s reign is slowly slipping away after carding a horrendous 77 to lie four strokes behind new leader, Lucas Yee of Perak who shot a two day total of 147 against Bryan’s 151. Galven Green of Perak also lie in contention for the title with an improved 73 today for an overall total of 147 to stay joint first with Lucas.

In the U-15 Girls category, new leader Sofia Chabon of Philippines lead by six strokes ahead of Indonesia’s Chiara Arya on 154 and Perak’s Winnie Ng with 155.

The Final Round will commence tomorrow morning.