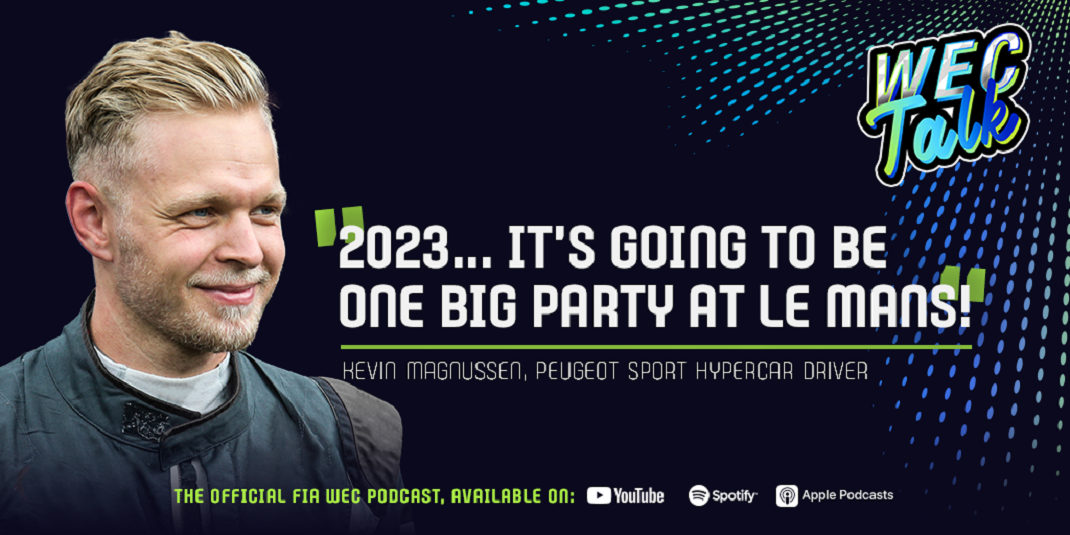 For the first WEC Talk of 2021, we chat to Denmark’s Kevin Magnussen – a well-known name in global motorsport but someone who is new to the FIA World Endurance Championship.

Listen to the full podcast on Spotify HERE and on Apple Podcasts HERE.

Magnussen, who spent seven years competing in Formula 1, is contesting the 2021 IMSA WeatherTech SportsCar Championship with Chip Ganassi and next year will join the WEC with Peugeot Sport as the French squad makes its highly-anticipated Hypercar debut.

The 28-year-old Dane, however, is no stranger to endurance racing as he grew up visiting paddocks around the world with his father – four-time Le Mans GT class winner, Jan Magnussen. Chatting to WEC Talk host Martin Haven, Magnussen reminisces about his childhood experiences as the son of an endurance racing legend, as well as his hopes for continuing the family legacy:

“All the Magnussen family are into racing – all my cousins, siblings, my dad, grandad, uncles – everyone has been racing at some point. It’s going to be great to take those guys to some of the WEC races and to continue the legacy with my own family.”

During the podcast, Magnussen also touches on the comradery between team-mates in sportscars and how it differs greatly from that in F1. He also discussed his upcoming WEC programme with Peugeot Sport.

Magnussen takes up the story: “My journey with Peugeot starts at the end of this year once my IMSA programme ends. Ferrari announced their commitment to Hypercar this week… so we’re about to enter a super exciting era of sportscars and I can’t wait to be a part of it. If I just imagine Le Mans in the future… there’s going to be Peugeot, Audi, Porsche, Toyota and Ferrari all racing against each other. I’m sure there’s going to be more joining as well – it’s going to be really exciting. The public perception of endurance racing is going to change when all these big manufacturers join – it’s going to be one big party at Le Mans!”

The Dane added: “Sportscars have always been big in Denmark, even in the eighties and nineties. We’ve had some pretty good drivers in the past… I think there were about 50,000 people at Le Mans in some years, that’s 1% of Denmark – all at Le Mans together!”