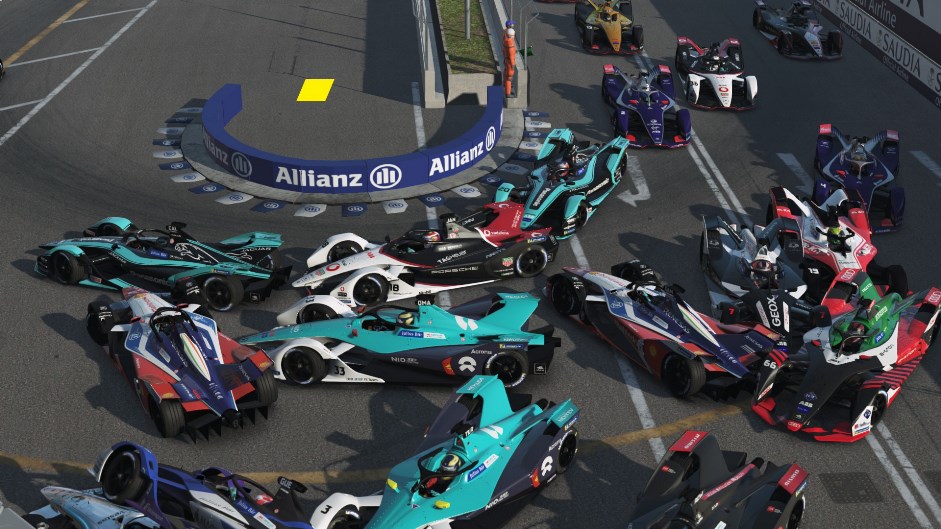 Formula E Season 7 (2020/21) will be broadcast live in over 150 countries, across six continents
– Season 7 sees over 40 media partners, with new broadcast agreements announced in Italy, Germany, USA, Brazil and across Africa
– Formula E will broadcast over 60 hours of live, and 40 hours of non-live programming per season in more than 30 languages
The 2020/21 ABB FIA Formula E World Championship campaign begins this Friday, with the action set to be broadcast in more than 150 countries around the world.
Season 7 (2020/21) – Formula E’s first as an official FIA World Championship – will begin on February 26 & 27, lighting up the streets of Diriyah with a double header in the dark to kick off the season.
Ahead of the season starting, Formula E has agreed new or extended media partnerships with over 40 broadcasters, notably Seven.One Entertainment Group (SAT.1) in Germany, CBS in the US, Discovery (Eurosport) across Europe, Sky Italia in Italy, Cultura and Globo in Brazil and SuperSport in Africa.
Formula E’s partnership with CBS in the US will broadcast two races on free-to-air channels, with at least a further six E-Prix broadcast on the CBS Sports Network throughout Season 7 (2020/21).
From North America to South America, where the all-electric racing series will be live on Brazilian TV for the first time from Season 7 (2020/21). Cultura will provide free-to-air coverage with Globo (SporTV) showing all Formula E races on pay TV, in what is a key market for Formula E.  Across Latin America, Formula E is partnering with Claro to provide full season coverage on Claro Sport platforms.
In Germany, the long-term partnership with Seven.One Entertainment Group (SAT.1) will see every E-Prix available free-to-air across the country. There will be on-site coverage from each E-Prix with a presenting line-up including Andrea Kaiser, Daniel Abt and Christian Danner.
Across Europe, Discovery will utilise its extensive range of free-to-air, pay-tv and digital platforms to support the growth of Formula E. Live and on-demand coverage will be presented through its leading multi-sport brand, Eurosport, in more than 50 markets, available via its linear and digital channels as well as being introduced on discovery+*, Discovery’s global streaming product, to expand the reach of the ABB FIA Formula E World Championship to the widest possible audience.
A multi-year agreement with Sky Italia will strengthen Formula E’s media coverage in Italy, complementing the free-to-air partnership with Mediaset. In addition to live qualifying and races on Sky Sports Channels and Channel 20, Sky will provide year-round editorial and news coverage across Sky Sports 24.
In the UK, an extended partnership with the BBC will see comprehensive, live, free-to-air coverage will air on BBC Red Button, BBC iPlayer and the BBC Sport website, with select races also airing live on BBC network channels, schedules permitting.
In France, all qualifying sessions and races will be available on L’Equipe’s digital platform, with options for races on L’Equipe’s linear channel, all supported by multi-platform promotion of Formula E covering print, digital and TV.
Formula E and SuperSport have announced a new, multi-year partnership to broadcast coverage live in more than 50 African territories. SuperSport will cover all of the races scheduled on the Season 7 calendar and fans will be able to watch each race and qualifying session live across SuperSport’s channels, app and website.
In the Indian sub-continent, this weekend’s season opener in Diriyah is scheduled on Star Sports Select 2 and Disney+ Hotstar, with highlights available on Disney+ Hotstar.
J Sports will continue to broadcast live coverage on pay TV in Japan, with BS Fuji picking up highlights of the action on free-to-air TV.
In China, Formula E and regional partner Enova have confirmed a series of streaming agreements for Season 7, including Sina Sports, Weibo, HUPU, HUYA, Tencent Sports, Youku, and KuaiShou.
The new partnerships will result in the ABB FIA Formula E World Championship being broadcast in more than 30 languages around the world, with over 60 hours of live, and 40 hours of non-live programming per season.