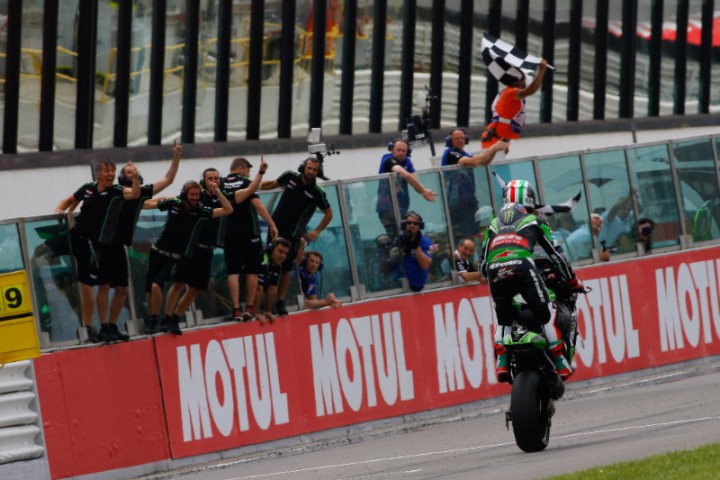 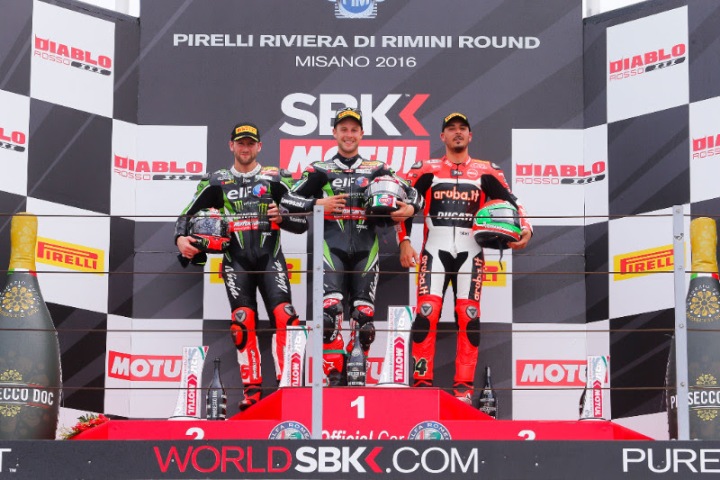 Classic tactics pay off for Rea on the Riviera di Rimini

Kawasaki Racing Team rider Jonathan Rea has completed a double at Misano World Circuit, stalking teammate Tom Sykes until pulling away with 5 laps to go and crossing the line with a 3 second margin in an impressive display from the reigning World Champion. Davide Giugliano made amends for a home crash in Race 1 to complete the podium for Aruba.it Racing – Ducati.

Sunday dawned in Misano with blue skies despite the threat of rain, and the weather held off for another incredible Race on the Riviera di Rimini. Rea got the jump on Sykes off the line as Yamaha’s Alex Lowes tried to muscle through on the inside of the Yorkshireman, before Sykes swooped around the outside to take back P1 and the KRT duo started to pull a gap on those behind.

An early, spectacular incident saw Althea BMW rider Markus Reiterberger highside out of the race on the first lap in a midfield tussle at Turn 8, with the German walking away from the incident unaided. A further fall on Lap 3, this time a lowside for Chaz Davies, then interrupted the midfield rhythm again as Honda rider Michael van der Mark was forced to shut off the gas to try and avoid the fallen Ducati, making contact enough to cause the Dutchman to fall before both were able to get back on their bikes.

Van der Mark then faced a fight back through the field, as Davies was forced to pull into the pits. The Dutchman put his head down and pulled back the deficit to the points, then focusing on the top ten and crossing the line in P10.

Davide Giugliano, after having suffered a similar crash in Race 1 to that of his teammate in Race 2, began to pull away from Barni Racing’s Xavi Forés in a bid to add another podium finish to his tally in 2016, keeping a healthy gap to the Panigale R behind to cross the line in P3 for some home glory. Forés followed the Italian home in P4 in an impressive ride, ahead Lorenzo Savadori for IodaRacing.

Savadori, who has won the last two ST1000 races at Misano, was able to show the potential of his Aprilia after having his Race 1 cut short, coming home in P5 for another impressive rookie result, and a great haul of points at the home Round of rider, team and manufacturer. Althea BMW rider Jordi Torres had a solid ride into P7 in the tightly packed mid-field, just losing out to Honda rider Nicky Hayden as the American took the Spaniard with two laps to go.

Alex Lowes came home in P8 for Pata Yamaha at Pata’s home Round despite still suffering the after-effects of his broken collarbone in Sepang, ahead of stand-in teammate Niccolo Canepa, who collected another impressive top ten in P9, ahead of charging van der Mark.

MV Agusta Reparto Corse rider Leon Camier, after an interrupted Race 1 followed by an incredible comeback, was sadly unable to finish Race 2 at the team’s home Round after a technical problem caused his retirement on lap 13. Anthony West got more points for Pedercini in P11, ahead of Roman Ramos for GoEleven in P12 and San Marinese rider Alex De Angelis in thirteenth. Milwaukee BMW pairing Josh Brookes and Karel Abraham completed the points positions in P14 and 15 respectively.

The next Round of WorldSBK will take place at Mazda Raceway Laguna Seca in California, from the 8th-10th July as the paddock prepares to attack the corkscrew.